Sophie Garbin is one of the nation's most up and coming shooters, and she's just taking it all in her stride.

Sophie Garbin had a decision to make.

For as long as she could remember, netball was just one of the sporting larks on her calendar.

If she wasn’t tossing a netball through a ring she would be on a court of a different kind dribbling a basketball around, often in tandem with her older sister Darcee.

Then there was Australian football, the code her dad Glenn served as president of the Kambalda Football Club during the family’s stint in Western Australia’s Goldfields.

By the time she turned 14, something had to give if Garbin was to maximise her rapidly developing skills.

Darcee had already chosen basketball, the sport that would eventually take her all the way to Townsville Fire in the WNBL.

“I was leaving basketball to race across to get to netball training,” Sophie said. “So, when it came to make a choice I felt I wanted to go the other way to my sister because I wanted to be different.

“I was enjoying netball more at the time and that’s what my friends were playing.

“I’m definitely happy with the decision I made.” 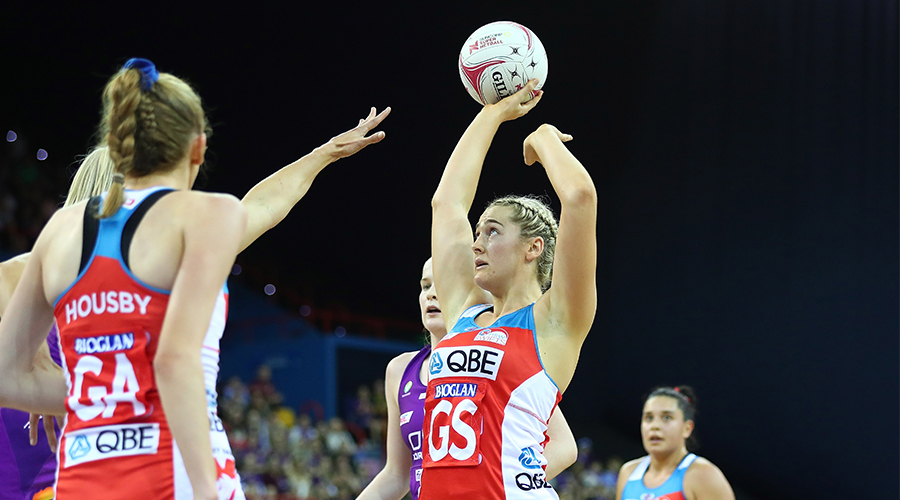 So, too, should the league-leading NSW Swifts be happy that she chose netball and later made an equally difficult decision to leave Western Australia for a fresh Suncorp Super Netball start in Sydney.

After beating homesickness shortly after her arrival at the end of 2017, Garbin has settled in Australia’s biggest city and is making a name as one of the Swifts most dependable assets.

Despite playing in only a handful of games, two of the 22-year-old’s outings have delivered stirring victories in the red dress.

On debut last year, she stared down Diamonds great Laura Geitz and shot the winning goal in a frantic finish against the Queensland Firebirds.

When given the chance again to be an ice-cold finisher, Garbin partnered with Helen Housby to sink her former club West Coast Fever in Perth.

Both were signs that Garbin possessed a hunger to have the ball in her hands when games were being decided.

“Sitting back at goal shooter, you have a lot of time to think. I much prefer to have the action around me to having it at the other end of the court.

“Once the ball’s in play near me, then I’m comfortable.”

With top three sides Sunshine Coast Lightning and Melbourne Vixens looming over the next two rounds, and a maiden SSN finals appearance waiting in September, Garbin’s knack for handling pressure situations is likely to be tested even further.

She may again have to bide her time behind Sam Wallace, but Garbin spent much of July studying Lightning defenders Karla Pretorius and Phumza Maweni driving South Africa to the Netball World Cup semi-finals.

Studying the pair did not yield any obvious weaknesses to be exposed when the Swifts and Lightning meet on Saturday at the Sunshine Coast.

They are the leading defensive partnership in the world and only a disciplined and precise attack line will prevail.

“I honestly don’t know how Karla pulls in some of those balls. She’s scary good,” Garbin said.

“So, you’ve got to be short with the ball and be patient.

“It’s not a game you can win in the first quarter.”