The Premiers for 2021 will be decided tomorrow in an all-NSW clash at Nissan Arena with the Swifts and GIANTS going head-to-head for their chance to claim the biggest prize in Australian netball.

We are finally here. After 14 grueling rounds of netball, impacted by interrupted travel requirements through multiple state lockdowns and quarantine, we have made it to the Grand Final weekend.

Once again, we must make time to appreciate every player, coach, staff member, official and broadcaster who have had to make immense sacrifices to keep this season afloat. Without your determination and resolution through these tough times the season would have never concluded. Thank you.

So, for the last time this season, here is all you need to know for the 2021 Super Netball Grand Final.

Netball will return to familiar territory this Saturday, as Nissan Arena will host the Swifts and GIANTS to decide who will be crowned Premiers for season 2021.

In a Super Netball first, we will have a state derby play out in the Grand Final, with an all-NSW matchup scheduled for tomorrow.

The GIANTS have a win percentage of 50% at the Brisbane court, with the Swifts holding a 75% win advantage at Nissan Arena, including a Semi-Final win over their Grand Final opponents.

If that Major Semi-Final was anything to go by, fans will be treated to quite the spectacle, with the GIANTS aiming to win their maiden Premiership and the Swifts pursuing their second trophy in three years. 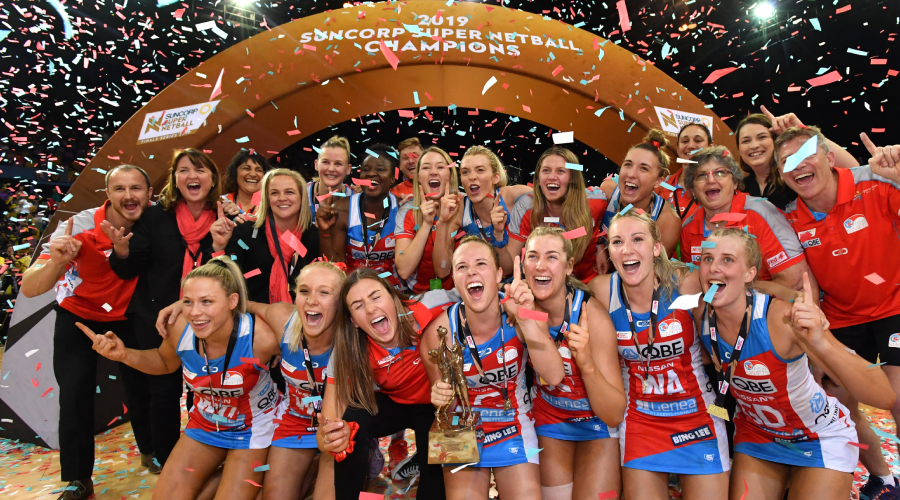 The Swifts will be on a mission to tie the Sunshine Coast Lightning’s record of two Premierships by taking out the 2021 Grand Final on Saturday.

Back in 2019, the Swifts extinguished the Lightning’s dreams of a three-peat, taking home the Premiership in a one-sided affair. The 17-point margin tied the previous highest Grand Final victory in Super Netball, which ironically involved the GIANTS being at the wrong end of the results.

The GIANTS are yet to win a finals match since 2017. In 2018, they finished on top of the ladder and claimed the minor premiership. However, the GIANTS went out in straight sets, losing to the Fever and Lightning in consecutive weeks.

There would have been a few nervous supporters leading into the Preliminary Final last week, but luckily for GIANTS’ fans, history did not repeat itself.

In a clinical display, the GIANTS dismantled the Fever, a team most (including myself) had tipped to go all the way.

The scoreboard didn’t do justice to how dominant the GIANTS were, who held a 13-point lead in the third quarter. A late Super Shot onslaught from the Fever made for a much more attractive score line, but there can be no denying the GIANTS aren’t here to make up numbers.

A late attack from the Fever would have had @GIANTS_Netball fans quite nervous. Here is how they kept composure to book themselves a spot in the 2021 Grand Final 👏#EverythingIsPossible #SSNFinals pic.twitter.com/kqQL8OAtU7

You don’t have to go back to far to find the last time these two teams met, considering the Swifts and GIANTS went head to head in the Major Semi-Final less than two weeks ago.

In a hot and high-paced encounter, the Swifts were able to pull off a famous victory by the narrowest of margins.

With two evenly placed teams, you just had the feeling that the game was always going to go down to the wire; and it certainly didn’t disappoint.

With only 17 seconds on the clock remaining and her team down by one point, Maddie Hay intercepted an errant pass, dished the ball on to Sophie Dwyer who went for the Hail Mary feed to Jo Harten inside the goal circle. Sarah Klau had no intention of playing extra time, pulling off a spirited interception to advance her team into the Grand Final.

The Semi-Final was won in the opening quarter with the Swifts taking a commanding eight point lead into the first break.

The GIANTS will no doubt be coming into this game with the intention of starting well. Falling behind in a big final like this early on in the piece will only add further pressure to your game, so starting well is critical.

Quick starts and the GIANTS go hand in hand this season, winning 11 of their 14 opening quarters in the regular fixture. One of those games was in round 14 when the GIANTS trailed the Fever by six points at quarter time to then go on to pinch victory and claim the Minor Premiership.

In the regular season, results between these two teams have been split. In Round 6 the Swifts ran away with a strong win, defeating the GIANTS by 12-points, while also winning every quarter in the process. This marked the only time this season that the GIANTS have lost every quarter in a single game.

One of the key factors that led to a Swifts victory was their domination of possession, owning 58% of the play across the game. 58% marked the highest possession percentage any team has recorded for the entire season.

We know the Swifts like to control the ball and take a methodical approach to goal, the question will be whether this game style will hold up under the pressures of a Grand Final.

In Round 11, the GIANTS enacted revenge, turning a 12-point loss into a narrow four point victory. Maddy Hay was the difference in this matchup, finishing with 32 feeds, 19 goal assists and 15 centre pass receives.

In the 11 times these teams have played each other, the Swifts have claimed victory in six of them. But, that will all count for nothing as Saturday’s Grand Final will provide the ultimate bragging rights in NSW netball.

The battle between Sam Poolman and Sam Wallace will make for compelling viewing. When these teams met back in Round 11, Poolman got the edge over Wallace, keeping her to just 39 goals on 79% shooting accuracy. The GIANTS’ goalkeeper finished with eight gains, four deflections, five rebounds and two interceptions.

Poolman is certainly in terrific form, earning herself the Player of the Match in the Preliminary Final by completely shutting down the best shooter in the league in Jhaniele Fowler.

Wallace finished the season fourth in the league for goals scored with 489, as well as fourth in shooting accuracy with 93%. On the other end, Poolman was ranked eighth in the competition for gains (47) and second for defensive rebounds (only two behind Sterling with 23).

On the other end of the court, the Jo Harten/Sarah Klau battle will be scintillating to watch. Klau was the hero in the Semi-Final with her timely interception over Harten to win the game.

The Swifts’ GK featured at the top of just about every defensive KPI, including fifth in interceptions (32), fourth in deflections (73), fourth in rebounds (20), third in gains (72) and first in pickups.

Harten is the barometer for the GIANTS, and depending on what Jo turns up, could ultimately decide the outcome of this game. The captain of the GIANTS had a solid Preliminary Final, but will be looking to improve her accuracy from Super Shot territory, ending the game one from five from that spot.

Jamie-Lee Price was everywhere in her team’s Prelim victory, finishing with a game-high 84.5 Nissan Net Points to go along with 31 feeds, 19 goal assists and only two turnovers.

Price’s matchup against Swifts’ captain Maddy Proud is what I am most looking forward to. Both players have had outstanding seasons and both are absolute work horses who love the challenge of a battle. It will certainly be a highly contested clash through the midcourt and one which should provide many highlights. 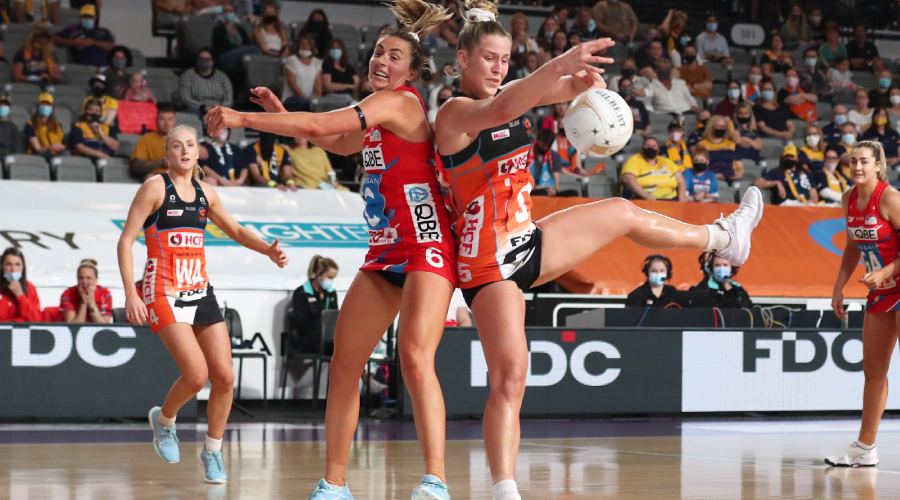 Proud was absent due to injury in her team’s maiden Grand Final victory, so look out for a fired up Swifts captain on the quest for a taste of Premiership glory.

The GA for both teams will also have a huge say in who will come out triumphant in tomorrow's match, with Helen Housby and Sophie Dwyer putting together outstanding 2021 campaigns.

Despite this being her first finals series, Dwyer was simply brilliant in last week's Prelim Final. The young gun was playing like a seasoned veteran, with her poise and composure leading her to team to victory.

Housby has the finals experience, playing a major part in the Swifts' 2019 Premiership with 71 Nissan Net Points and 18 goals.

Her connection with Wallace is second to none and the GIANTS' defender will need to be at their absolute best to limit the duos impact.

A little bit of show time ✨

The one player I am tipping to have a major influence in this clash is Amy Parmenter. A player like Parmenter, who possesses that rare gift of what seems like the play is in slow motion for her, is built for big games like this.

Her ability to read the flow of the game is unparalleled, so keep an eye out for some timely interceptions in the heat of the battle.

You get the feeling that this all-NSW Grand Final will come down to the dying moments of the game, similar to their Major Semi-Final encounter.

I'm predicting the game to go into Extra Time with the Swifts using their finals experience to get over the line and claim their second Super Netball Premiership.

During the week we spoke to Maddy Proud about the season that has been and the team's preparation into tomorrow's Grand Final. Read here.