Week one of the finals has arrived and we have a Semi-Final double-header on Saturday to kickstart proceedings.

After 14 grueling weeks of the season, interrupted by almost every obstacle imaginable, the 2021 final series is finally here!

We have two thrilling matches lined up for an exciting Saturday of finals Netball and here's all you need to know for week one of the finals. 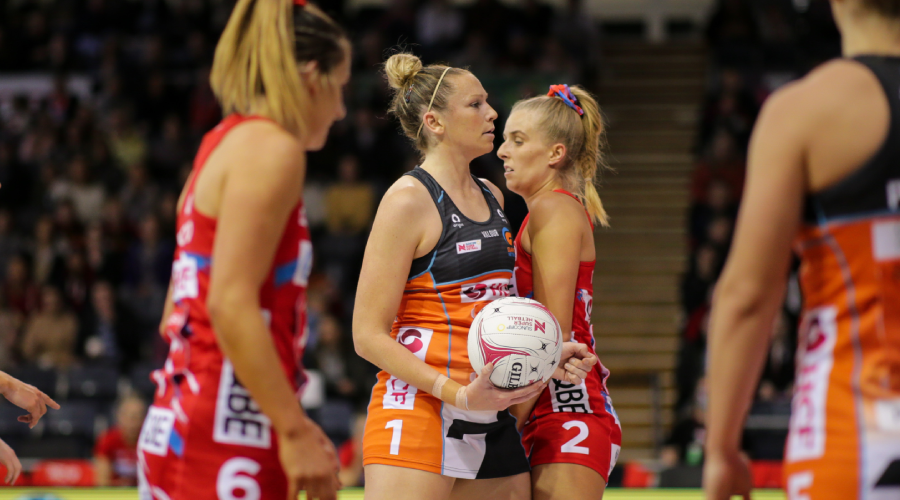 The major semi-final will kick off Saturday’s proceedings, with the game set to start at 1:00PM AEST at Nissan Arena. The winner of this match will book themselves a one way ticket straight into the 2021 SSN Grand Final. There is a fair bit on the line in this one.

No matter who comes out victorious in this game, a NSW based team is guaranteed to feature in the big dance. This is also the first time both NSW team's will feature in the finals in the same year.

In 2019, the Swifts were crowned Premiers after a convincing 17-point win over the Lightning, which adds a layer of experience to this Swifts’ outfit, a factor that could become important when the heat is on in the finals.

On the other side of things, the GIANTS are yet to win a finals match since 2017. In 2018, they finished on top of the ladder and claimed the minor premiership. However, the GIANTS went out in straight sets, losing to the Fever and Lightning in consecutive weeks. Considering the GIANTS were just awarded the minor premiership, thanks to a two point win over the Fever last week, they will be desperate to make amends of their lost chance back in 2018.

Sam Wallace was a force to be reckoned with in this encounter, shooting 58-goals from 58-attempts; and ending with a game-high 92.5 Nissan Net Points.

The Swifts dominated the possession, owning 58% of the play across the game. This is the highest possession percentage any team has recorded for the entire season, showcasing that if they can play their usual slow build-up style of play, they can nullify the GIANTS’ sharpshooters up front.

The GIANTS got their revenge in Round 11, winning by a narrower margin of 4-points at Netball SA Stadium. Sam Poolman was huge in the win, keeping Wallace to just 39-goals on 79% shooting accuracy. Poolman was taken out of the game in their Round 6 clash in just the second quarter, but this time around, the GIANTS’ GK played the entire 60-minutes; finishing with eight gains, four deflections, five rebounds and two interceptions.

Young gun Sophie Dwyer was lively in that win, providing the perfect second option alongside Jo Harten. Dwyer also had a team high 18-centre pass receives and 13-goal assists; displaying her ability to impact the game in multiple ways. Having two players who can score at high volumes on the same team will be a challenge to defend on Saturday.

In amazing circumstances, both the GIANTS and Swifts finished the regular season with the exact same amount of points scored with 853 (equal second most in the league). We are yet to see a game go into Extra Time in a Super Netball final, perhaps fans might be treated to this spectacle on Saturday.

In fact, these two teams played in the last ever draw that didn’t go into Extra Time (due to the new ET rule). In the last round of the 2020 season, the Swifts and GIANTS played out a high scoring 77-77 draw, which actually ended up costing the Swifts second spot on the ladder. The Swifts lost their double chance and were booted from the finals in the first week with a 5-point loss to the Fever. There is unfinished business for this Swifts’ team.

As I mentioned above, the battle between Wallace and Poolman will go a long way in deciding who wins this semi-final. Wallace finished the season fourth in the league for goals scored with 489, as well as fourth in shooting accuracy with 93%.

On the other hand, Poolman is ranked eighth in the competition for gains (47) and second for defensive rebounds (only two behind Sterling with 23). If Wallace is having an off shooting night, which we have seen at times during the season, Poolman will gobble up those missed shots and turn that into attacking forays.

Sarah Klau is a defensive colossus. Thanks to her 190cm frame and her inimitable ability to read the ball, Klau features at the top of just about every defensive KPI. The star Swift concluded her 2021 campaign ranked fifth in interceptions (32), fourth in deflections (73), fourth in rebounds (20), third in gains (72) and first in pickups.

The Harten/Klau matchup should be critical in this one.

Harten is as experienced as they come, and her composure and coolness under pressure will be worth its weight in gold during the finals. Harten’s leadership as captain of the GIANTS has been unsurpassable, with her team’s season looking like it had derailed after losing three out of four games heading into Round 10.

Facing tough lockdown restrictions, the GIANTS then went on to win four out of their last five matches to claim the Minor Premiership. It’s hard to not link Harten’s leadership and the culture embedded within her team to the GIANTS’ revival.

Intercept queen Amy Parmenter will suit the high pressure style of play that the finals will offer. Her battle against Paige Hadley will be an exciting matchup that should result in a flurry of highlights.

April Brandley and Matilda McDonell have both been named to play after missing recent games due to injury. Any players will be a welcome sight for the GIANTS, who were forced to play with just eight players on their squad last week.

These two teams are evenly matched and I have a feeling this game will come down to the dying stages of the last quarter.
The GIANTS have peaked at the perfect time and are playing scintillating Netball. Look for Jo Harten to have one of those spirited captains games and will her team over the line in the narrowest of margins 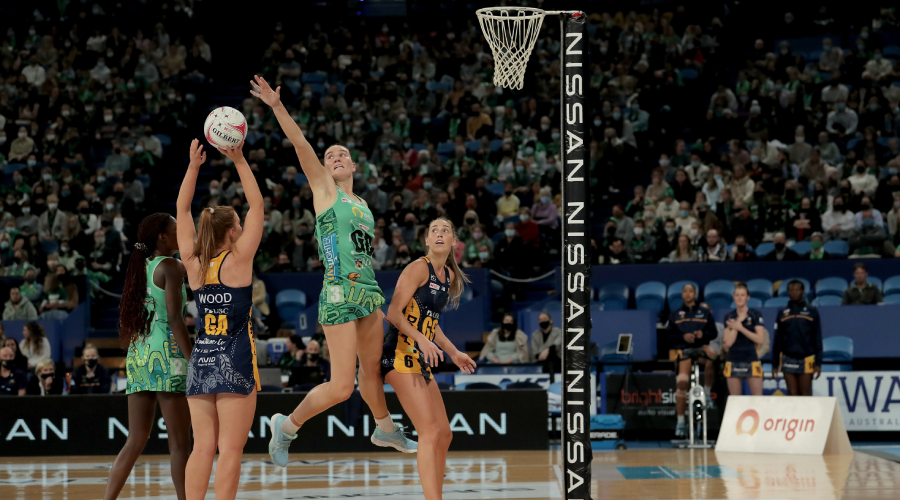 The minor semi-final will be played at 3:00PM AEST at Nissan Arena directly after the conclusion of the major semi-final.

This is win or go home Netball. Lose this and your 2021 campaign is over. Win, and you book yourself a place in the Preliminary Final against the loser of the prior match.

The Lightning are currently the most successful team in Super Netball history, claiming back-to-back Premierships in 2017 and 2018, making them the only club to win multiple Grand Finals. In 2019, the Lightning failed to make it a three-peat, going down to the NSW Swifts by 17-points in a shock defeat.

After finishing second on the ladder last season, the Lightning were eliminated from the finals in straight sets, losing to the Vixens and Fevers by an average margin of 15.

In contrast, the Fever have had a heartbreaking finals experience to date, losing two Grand Finals in 2018 and 2020 by less than three in both games. This would have left a bad taste in their mouth, falling short on two occasions to claim that prized silverware.

Considering this is Stacey Marinkovich’s last season coaching the Fever (before she takes up the full-time role of the Diamonds’ head coach), her team will no doubt want to send her off in style.

To pull off another miracle, they will need to go through the Fever first. That will be no easy task, as the Fever finished the regular season with the most wins in the league. I’m sure this will be a trivia question for years to come, with the peculiar happenstance of the Fever winning the most games yet not finishing in the top 2 at season’s end.

In the 2018 Grand Final, Caitlin Bassett was named the MVP for the Lightning. The Fever won’t need to worry about history repeating itself, with Bassett currently playing for the Waikato Bay of Plenty Magic in the ANZ Premiership.

The Fever and Lightning have split their results in 2021, with the Lightning holding recent bragging rights after their 4-point victory in Round 10. This win will give the Lightning extreme confidence in knowing that they can match it with the best.

In their first encounter this season, the Fever marched to a comprehensive 15-point win in Round 3. This victory wiped away the Fever’s three-game punishment for salary cap breaches in as many games. In fact, the Lightning actually held a staggering 9-point lead at quarter time, before the Fever went on a scoring blitz to outscore their opponents 57 to 33 in the remaining quarters.

In the short history of the Super Netball competition, these two teams are locked at six wins each against each other, so not only will the winner of this game progress into the second week of the finals, they will also obtain the buffer over their opponent.

Karla Pretorius was the Grand Final MVP in the Lightning’s 2017 win over the GIANTS, finishing with five gains, three interceptions and three deflections; as well as forcing 13 turnovers from the GIANTS’ attacking trio. Pretorius has the finals experience and will be the general in defence for the Lightning like she has been all season.

Steph Wood was awarded the Player of the Match in her team’s Round 10 win over the Fever, ending with a game-high 110-Nissan Net Points, 19-goals, 18-goal assists, 25-feeds and 21-centre pass receives. Basically just the complete performance from a Goal Attack.

Wood has been named to play on Saturday, and considering Steph is second in scoring, feeds and goal assists for the Lightning, fans will be nervously hoping Wood is 100% right to go on Saturday.

Something else that might make Lightning fans nervous is a player by the name of Jhaniele Fowler. Fowler, who might be the favourite to win her fourth straight league MVP, led the league in Nissan Net Points (1447.5), goals scored (788), shooting accuracy (97%) and total points scored (792).

The matchup between Fowler and Phumza Maweni will be an intriguing battle. The Lightning GK gives up 12cm to Fowler, but what Maweni lacks in height, she makes up for in physicality and experience.

It will be interesting to see how the Lightning play Fowler on Saturday. Do they play a traditional style of defence, closing out all options in the attacking third. Or, do they try to stunt Fowler’s influence completely, forcing the likes of Teague-Neeld and Glasgow to beat them.

At the other end of the court, Courtney Bruce is as reliable as they come. Her ability to read the play and impact almost every contest is why the Fever are so difficult to score against.

Verity Charles is in scintillating form at the moment, peaking at just the right time. Charles finished the season first in goal assists (292) and second in feeds (471), but her main strength can’t be measured in statistics; and that is her connection with Fowler.

If the Lightning want any chance in upsetting the Fever, they need to disrupt the Charles/Fowler connection.

The Lightning have the finals experience at their advantage, however, the Fever just seem like they are on a mission this season.
Wood back in the team will help the Lightning's chances, but the Fever are just too strong across all positions and should get the job done.