Learn how the Swifts defeated the GIANTS in a thriller to progress into the Grand Final and how the Fever eliminated the Lightning from the 2021 Final Series.

The first week of the 2021 Finals Series has been completed, with two thrilling back-to-back games treating fans to a spectacle of high quality and high pressure netball.

Every team had the chance to snatch victory, but it was the Swifts and Fever who came out triumphant; with the Swifts advancing to the Grand Final and the Lightning eliminated from Premiership contention.

Here is how both games were played out. 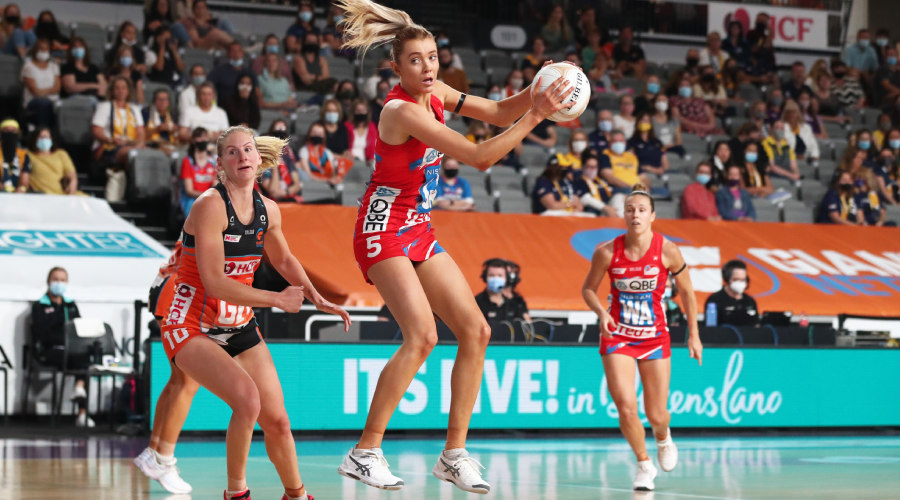 The biggest game of the season so far certainly didn’t disappoint. With a spot in the Grand Final up for grabs, it was a high paced, high pressure brand of Netball ― a true spectacle for all fans.

You just got the feeling leading into this game that it was always going to come down to the dying moments, and when Sarah Klau picked off a pass intended for Jo Harten inside the goal circle with just ten seconds remaining, that inkling came to fruition.

With these two teams finishing the season locked on 36 points, with only 1.46% separating them on the ladder, a close encounter was inevitable.

However, the Swifts had other plans to start the game, pushing out to an eight point lead at the first break. It was a case of taste your own medicine for the GIANTS, with the Swifts sinking three Super Shot’s to close out the first quarter.

There is no secret that the GIANTS relish the opportunity of taking the two points when available, leading the league in attempts with 177. On the contrary, the Swifts attempted the second fewest number of Super Shot’s this season (73), 100 less than their NSW rivals. It was an intriguing strategy by the Swifts, but one that certainly paid off in giving them a hefty buffer at quarter time.

It was Sarah Klau who set the tone early for her team, claiming two intercepts and four gains in the opening quarter, as well as bringing a sense of intensity and vigor to the court that her teammates were feeding off.

Another vital factor that led to the Swifts’ eight point lead at quarter time was Tayla Fraser’s ability to reduce Maddie Hay’s impact on the game. Hay ended the regular season fifth in goal assists, third in feeds and fourth in centre pass receives across the entire league; so it was clear that the Swifts had come into this game with the tactic of disrupting the star wing attack’s game style.

However, it is hard to keep a leash on great players for an entire game, and with the match starting to slip out of her team’s reach, Hay found a way to inject herself into the contest. In an amazing turnaround, the star WA broke free of her tight tag and willed herself to a team high 88.5 Nissan Net Points, along with 36 feeds, 17 goals assists and 26 centre pass receives. 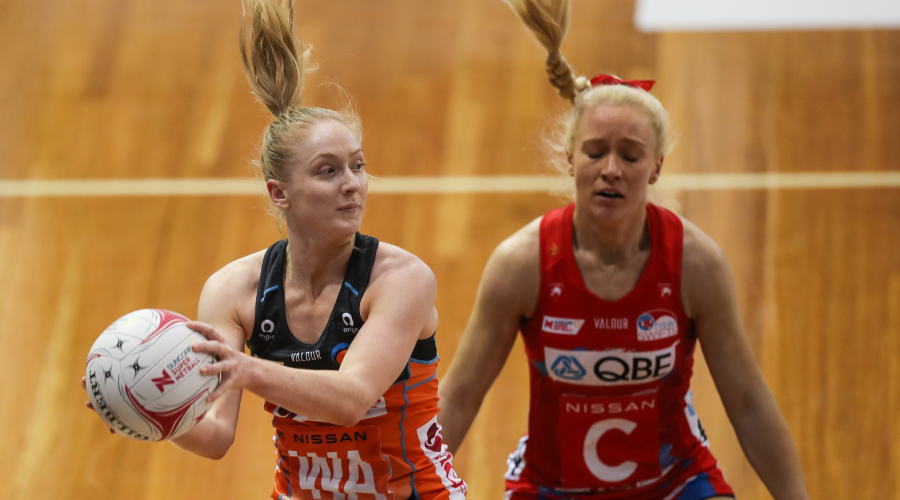 Hay also came up with an inspirational gain in the dying moments of the match that almost led to a game-tying goal from Harten. Unfortunately in the heat of the battle, Sophie Dwyer’s long pass was cut off by an expecting Sarah Klau. In just her first finals appearance, you can’t blame Dwyer for attempting the high-risk feed in such a high pressure scenario.

The Klau intercept ultimately led to a one point win for the Swifts, robbing Netball fanatics of the first ever Extra Time final in Super Netball history.

Sam Wallace was terrific all game, providing a prodigious target for the Swifts' midcourt. It must give the likes of Proud and Hadley extreme confidence moving the ball inside their attacking third knowing they have such a reliable target to look for. Wallace’s 94% shooting accuracy also rewarded the hard work her teammates were putting in.

A little bit of show time ✨

This matchup marked the first time in Super Netball history that both of the NSW affiliated teams would compete in the same Finals Series. The GIANTS missed out on making the finals in 2019, falling short of fourth spot by an agonising 0.6% to the Magpies. The Swifts went on to claim the Premiership that year, a triumph they will be hoping to repeat this season.

The Swifts are one step closer to claiming that feat after clinching a spot in the 2021 Grand Final with this thrilling one point win over their cross-town rivals. However, only 50% of teams who have won the major Semi-Final have then gone on to claim the Premiership, so the Swifts will know there is still a lot of work to be done.

The GIANTS will be kicking themselves that they let this game slip after claiming the Minor Premiership last week. Now, the GIANTS will have to face a rampaging Fever outfit in what is set to be an action packed Preliminary Final. 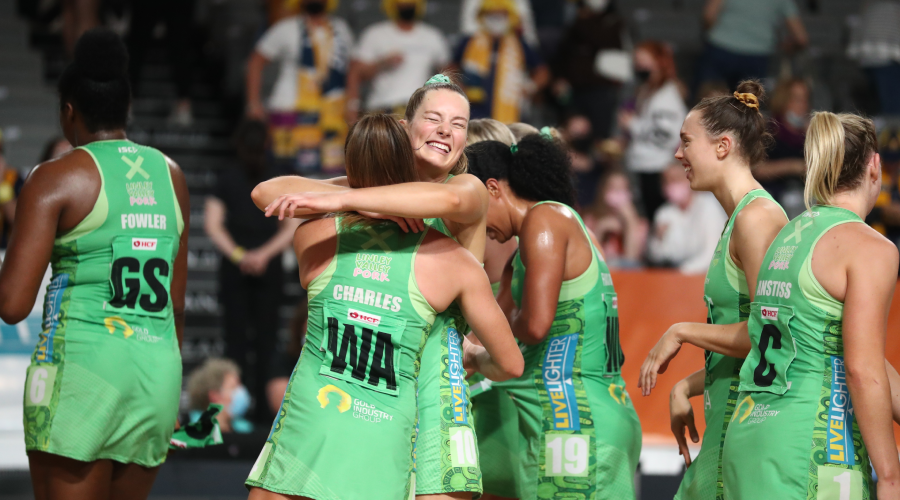 The second game of the Semi-Final double header saw the Fever defeat a spirited Lightning by eight points. With this game being played at Nissan Arena, the Lightning had the luxury of playing in front of a home crowd; an experience not many teams have had in the last month.

The Lightning also had the confidence of knowing they could match it with their opponent, after their four point win over the Fever back in Round 10. In that win, Steph Wood was simply unstoppable for the Lightning, finishing with a game-high 109.5 Nissan Net Points. So, with an injury cloud hovering over Wood heading into this match, and with Wood being the difference in their Round 10 victory, Lightning fans would have felt comfort when hearing the star shooter would play on Saturday.

Despite the Fever scoring their lowest opening quarter score since Round 11, the heavy favourites held a three point buffer over their opponents. First quarter’s have been the Lightning’s strength all season, winning or being level 64% of the time across the year. On the contrary, first quarter’s are the Fever’s worst. So, when the Fever held the advantage at quarter time, concern would have started to creep into the Lightning’s camp.

Another strong second quarter allowed the Fever to extend their lead to seven points at half time, giving the Lightning a huge mountain to climb to cause an upset.

I’m not sure what Kylee Byrne said to her troops at half time, but it certainly worked. It also could have been the realisation that a defeat here would ultimately be the end of their 2021 campaign. Everything was on the line in the second half and the Lightning came out playing like a team with nothing to lose.

The Lightning lifted their intensity and pressure across the entire court, causing uncharacteristic turnovers from the Fever.

Cara Koenen tried hard all game and reduced the margin to just two points at the final break, thanks to five consecutive goals to close out the quarter. The Lightning were right in this game; and with a history of finals experience behind them, victory was certainly on the cards.

You couldn’t pick a winner before this game started and you still couldn’t pick one now. Who wins it from here?#EverythingIsPossible #SSNFeverLightning #SSNFinals pic.twitter.com/Prj2E6vcwU

Despite shooting four Super Shot’s from four attempts, Stacey Marinkovich made the tough call to sub Alice Teague-Neeld out of the game and replace her with Sasha Glasgow. Teague-Neeld was providing a good option, however her four turnovers were proving costly.

Glasgow had an immediate impact when entering the court, registering six goals, 13 feeds, 12 goal assists and 11  centre pass receives in only 20-minutes of playing time. But the most important statistic was her low turnover count, which allowed the Fever to convert their midcourt dominance into scoreboard pressure.

The Fever had not dropped a final quarter all season, so if the Lightning were going to win they would have to break that trend. In the end, the Fever were just too classy and put together a professional last quarter to run away with an eight point win.

Verity Charles and Jess Anstiss were simply unstoppable and perhaps saved their best games for the most important match of the season to date. Charles was awarded the Player of the Match, finishing with an incredible 48 feeds and 28 goal assists. Her connection with Fowler is second to none in the league and is the main reason for the Fever’s outstanding year.

The Fever just have stars across the entire court, with Bruce and Fowler the pillars at both ends. Both players put together brilliant performances and lifted when their team needed them the most.

The Lightning will be disappointed in the loss, however, the team from the Sunshine Coast have had an amazing season and can use this as momentum leading into 2022. I’m certain we will see the Lightning back in the finals next year.

The Fever will now play the GIANTS next week, in what will no doubt be an electrifying spectacle, for the chance to play the Swifts in the 2021 Grand Final.