All the news you need to know during the 2022/23 Suncorp Super Netball player signing period.

Your one-stop shop for all the player signing, movement and retirement news from around the league.

The Queensland Firebirds have finalised their squad for 2023 with defender Ash Unie.

The 26-year-old's dreams were put on hold after she had a season-ending ACL injury at the start of 2021 while with the Sunshine Coast Lightning.

Her determination to get back to her best sees her rewarded and due to return to the Suncor Super Netball court, having played three matches in 2020.

The 28-year-old Brisbane native believed her dream of making the SSN was "over" but her dream is about to become a reality.

“It’s pretty wild to be in this position, making my debut with the Firebirds,” Kamo said.

The Queensland Firebirds have signed Macy Gardner to their contracted 10 for 2023.

Macy joined the Firebirds in 2018 as a training partner, made her Suncorp Super Netball debut the following year and was elevated to the team for the first time in 2020.

Macy spent 2021 and 2022 working hard as a training partner and as a result returns to the Firebirds contracted 10.

Melbourne Vixens defender Olivia Lewis will remain at the club for 2023.

Lewis's re-signing means the Vixens squad of 10 is now finalised ahead of next season with the rest of the team having already signed on.

Miller back in the Lightning colours for 2023

The 21-year-old made the move to the Sunshine Coast playing her first season with the Lightning this year after being a training partner with GIANTS Netball in 2021.

Midcourter Tayla Williams has signed on for another season with the Adelaide Thunderbirds.

2023 will be the 22-year-old's second season with team after an impressive first season that saw her named Player of the Match in Round 11 cementing her position in the Thunderbirds starting seven.

The 24-year-old played every game and was a critical member of the Lightning’s midcourt this year after an injury plagued 2021.

The Pies have also re-signed defender Jacqui Newton for another year.

This will be Newton’s third campaign with Collingwood.

Last week the Queensland Firebirds announced the 24-year-old Townsville native was approached with a fresh deal but opted to accept an opportunity elsewhere within the Suncorp Super Netball system.

On Thursday it was revealed Jenner would be making the big move to the west to join the newly minted SSN Premiers.

She joins a strong defensive line-up including Diamonds Sunday Aryang and Courtney Bruce. Rudi Ellis has also signed on.

Cosh to remain at green army

Explosive attacker Emma Cosh will remain at the West Coast Fever for season 2023, after re-signing with the premiership winning club.

She debuted with the club in 2020 after being elevated to the senior list as a replacement player.

Cosh was an integral part of the Fever's 2022 SSN premiership.

She will join the likes of Sasha Glasgow and Jhaniele Fowler in the shooting circle.

The Adelaide Thunderbirds have re-signed Tippah Dwan, completing their shooting circle for season 2023.

This marks Dwan's second season with the Thunderbirds after first donning the pink dress at the beginning of 2022.

Maddie was originally named a training partner for the 2022 season, but was elevated with Karla Pretorius expecting her first child.

She played an impressive number of minutes, especially in centre.

Her sister Tara will remain at Lightning for season 2023.

South Australian native Lucy Austin has been elevated to the Adelaide Thunderbirds' contracted 10 for season 2023.

Austin spent two years as a training partner with the club and debuted against the Melbourne Vixens earlier this year when she picked up the fan-voted MVP award.

The 20-year-old also put on a stellar performance in round 11 against the Collingwood Magpies, shooting 49/53.

Nyah Allen has been offered a contract for season 2023, cementing her spot in Collingwood's contracted 10.

The 20-year-old shooter joined the club as a training partner in December 2019 following a stint with the Adelaide Thunderbirds.

Hailing from Mount Gambier, the youngster was part of the South Australian state team

Allen enjoyed a break-out year with Collingwood in 2020 where her composure and accuracy were on show.

She joins experienced Pies Shimona Nelson and Sophie Garbin in the shooting circle for the 2023 campaign.

The Collingwood Magpies have not offered Maggie Lind a contract for the 2023 season.

Lind joined Collingwood as a training partner in 2021 before being elevated to the senior list less than 12 months later.

Last year the 28-year-old won the Victorian Netball League Most Valuable Player award after a stellar season with the City West Falcons.

Nankivell Remains a Thunderbird for 2023

Adelaide Thunderbirds vice-captain Maisie Nankivell has signed a contract extension with the club for 2023.

It'll be the midcourter's fourth season with the Thunderbirds.

After 25 games in the Thunderbirds pink dress, Adelaide has confirmed that they will not be offering Elle McDonald a contract for the 2023 season.

McDonald joined the Thunderbirds before the 2021 season and was a key piece in their midcourt group since then.

After six season at the Queensland Firebirds, defender Kimberly Jenner has chosen not to accept a contract from the club, instead choosing to test the market.

The club has revealed that the 24-year-old Townsville native was approached with a fresh deal but has opted to accept an opportunity elsewhere within the Suncorp Super Netball system.

The news comes after starting goal keeper for much of the 2022 season Eboni Usoro-Brown announced that she would not be returning to the Firebirds in 2023.

The Adelaide Thunderbirds have found their new shooter, signing Manchester Thunder and England Roses goaler Eleanor Cardwell for the 2023 season.

The versatile 27-year-old, who fans will have the opportunity to watch when she represents England at the Commonwealth Games, averaged just under 30-goals per game for the Thunder in 2022 and should slot straight into the GS spot left vacant after Lenize Potgieter was not offered a new contract with the club.

“With four VNSL Premierships and 39 international caps to her name, Eleanor brings great knowledge and experience to our side,” Bourdon said.

“Her ability to play both goal attack and goal shooter gives us versatility and she has proven her capacity to shoot from range."

Long-time Queensland Firebirds midcourter and former club captain Gabi Simpson will be returning for her 11th season in Brisbane, signing on for the 2023 season

The 29-year-old who has been with the Firebirds since 2013, played a pivotal role in her side's 2022 season, where they fell agonisingly short of a finals spot.

Her veteran presence and leadership skills will be vital as the Firebirds search for a new Head Coach and reshuffle their midcourt ahead of the 2023 season. 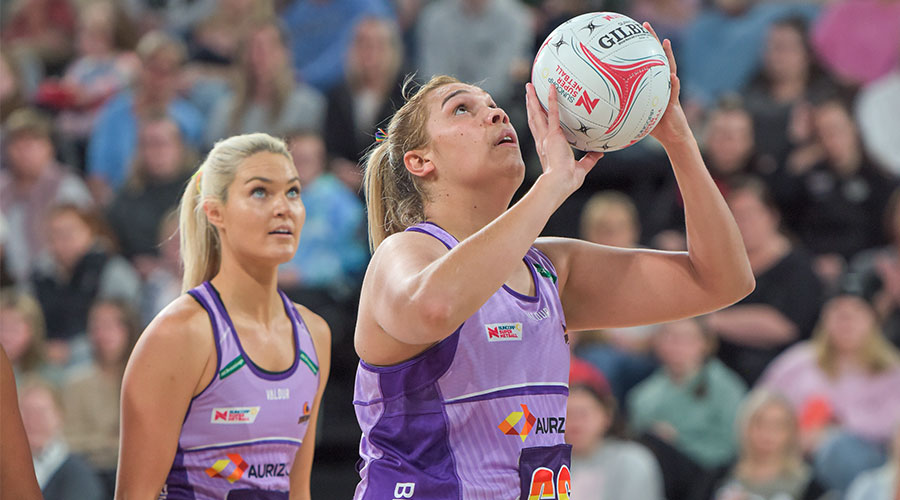 Bakewell-Doran and Wallam re-commit to Firebirds

After strong 2022 seasons with the Queensland Firebirds, Diamonds squad members Ruby Bakewell-Doran and Donnell Wallam have both re-signed with the club for 2023.

Bakewell-Doran exploded onto the scene in 2022, claiming the starting goal defence position alongside Eboni Usoro-Brown where she finished the season with 56 deflections and 19 intercepts.

Wallam was brought into the side as a temporary replacement player for Romelda Aiken before the 2022 season, and immediately slotted straight into the team alongside Gretel Bueta. She finished the season with 545 total points, the fourth highest total in the competition.

Both Bakewell-Doran and Wallam will be heading to Birmingham as part of the Origin Australian Diamonds Commonwealth Games squad, with both being named as reserves for the tournament.

Sinclair not offered contract at Pies

The Collingwood Magpies have decided to part ways with Gabrielle Sinclair, not offering the shooter a contract for season 2023.

Sinclair joined the Pies as a training partner in 2017 where she played for the club's former ANL side, the Tasmanian Magpies.

She was later elevated to Collingwood's senior list in 2019 where she was a mainstay in the goal attack position for the club's 2020 campaign.

Sinclair 28-year-old was an exciting, dynamic shooter, often taking the court during the Power 5 to showcase her super shot skills.

She played 47 national league games for the Pies.

Stower returning for the 2023 season

The Queensland Firebirds 2023 shooting circle is beginning to take shape, with the club confirming that Mia Stower has been inked for the 2023 season.

The 22-year-old Queenslander excelled behind Gretel Bueta and Donnell Wallam this year, making a name for herself as a Super Shot specialist and calm pressure situation shooter.

She'll join Bueta and Wallam, who also re-signed with the club for 2023 today.

The NSW Swifts 2023 roster is now complete, after the club confirmed that Sophie Fawns has signed a senior contract.

The 18-year-old shooter made her debut in Round 2, being elevated to the senior squad after Sam Wallace was ruled out for the season with a torn ACL.

With Housby and Wallace set to return in 2023 and Fawns getting some incredibly important experience during the 2022 season, the future is bright for this Swifts shooting group. 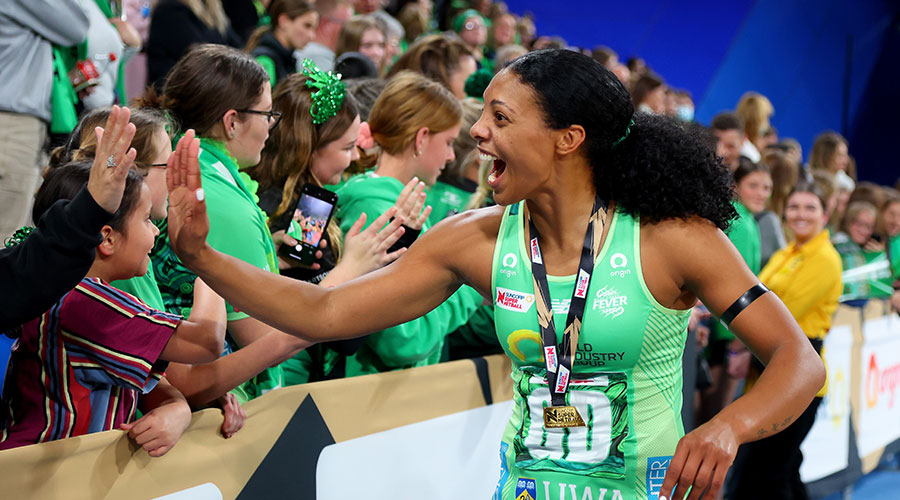 Francis-Bayman to retire after Commonwealth Games

After claiming her first premiership with the West Coast Fever on Sunday, international defender Stacey Francis-Bayman announced that she will be retiring from professional netball after the 2022 Commonwealth Games.

The England National team member made the announcement during the club's end of year awards dinner, and finishes her career with 101 national league caps, including 92 with Fever since joining the club in 2017.

Francis-Bayman will be hoping to add a Commonwealth Games gold medal to her 2022 Premiership medallion to finish her brilliant career.

Swifts move on from Singleton

The NSW Swifts have announced that shooter Kelly Singleton will not be offered a senior contract for the 2023 season.

Singleton debuted for the Swifts in the 2020 Super Netball hub in Queensland, before earning her first full-time contract for the 2022 season, totalling 16 caps since first taking the court.

The 24-year-old was called on to replace the injured Sam Wallace in 2022, but ended up being used as an impact player off the bench behind Helen Housby and Sophie Fawns.

Despite the news, the club have confirmed that they will be assisting Singleton in her next netball endeavours and didn't rule out re-signing the shooter. 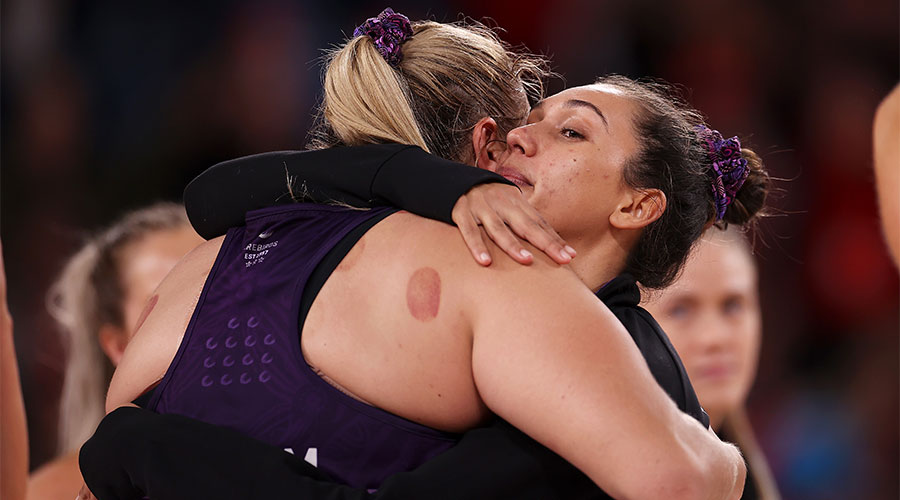 The Queensland Firebirds have confirmed that it will not be re-signing midcourter Jemma Mi Mi for the 2023 season.

26-year-old Mi Mi has been with the club for six seasons and made her 50th national league appearance during the 2022 season.

Mi Mi's speed and creativity are the hallmarks of her game, but a bad run of lower-body injury issues have stalled her career so far.

After a strong 2022 season, the NSW Swifts have announced that defender Teigan O'Shannassy has been re-signed for 2023.

The 23-year-old has come up through the NSW pathways and started her Super Netball journey as a training partner with GIANTS Netball, where she made her debut in 2019.

O'Shannassy moved from the GIANTS to the Swifts in 2021 as a training partner, before signing a senior contract for the 2022 season.

Smith to remain a Swift

After a strong first season at her new club, dynamic midcourter Allie Smith has signed a new contract that will keep her at the NSW Swifts until the end of the 2023 season.

The 22-year-old, who was part of the premiership winning Melbourne Vixens side, was a great inclusion for the Swifts, playing in all 14-games in 2022, primarily at the Wing Defence position.

After three seasons and 39 matches, the Adelaide Thunderbirds and shooter Lenize Potgieter have parted ways, with the club confirming they would not be offering the South African another contract.

Potgieter, who will be representing South Africa at the 2022 Commonwealth Games, finished the season with the eighth most points scored (352).