Our Champion Data expert breaks down all the numbers as GIANTS Netball prepares to play the Sunshine Coast Lightning in a cutthroat Suncorp Super Netball preliminary final.

Here’s everything you need to know, as well as our Insider’s tip.

There is nothing splitting the Giants and the Lightning in the head to head, with two wins, two losses and one draw each across the two Super Netball seasons.

The last time these two sides meet in a do-or-die finals match was last season’s grand final, where the Giants were trounced by 17 goals – the biggest losing margin in Giants history.

They have meet twice at Qudos Bank Arena with both teams tasting victory.

The Giants go into this match with a slightly better win/loss ratio in 2018, but the Lightning are on a 5-0 run. Only one other side, the Vixens, has had a 5-0 run this season.

They teams are quite even across all quarters, with the middle two quarters being the strength of both. Each team has only dropped one game after leading at three-quarter time, so getting to the last break in front could be decisive.

The first grand final replay saw the Lightning travel to Sydney. The Giants welcomed back their inspirational skipper in Kim Green, who was playing her first game in 13 months after doing her knee in Round 5 in 2017. The Giants were also keen on revenge after their disappointing showing in the 2017 grand final.

The Giants jump to an early lead, scoring the first three goals of the game which they maintained all quarter to win their first ever bonus point of the year. The Lightning settled to go on a five-goal scoring run midway through the second quarter to hit the lead. But the Giants were able to weather the Lightning storm to thunder home and claim a three-goal win. Both sides won two quarters each, but the Giants’ first quarter three-goal margin was the difference at full-time.

Kim Green was outstanding in her return, with 24 goal assists from 50 circle feeds and 20 centre pass receives. Jo Harten continued her Commonwealth Games form, scoring 33 from 36. The Giants’ defence was at its very best, taking seven intercepts between them – Jamie-Lee Price (two) and Bec Bulley (three) led the way.

Steph Wood was the Lightning’s standout with 15 from 16 shooting, 17 goal assists from 22 feeds (77% feed to goal ratio) and 22 centre pass receives. Karla Pretorius was again outstanding with three intercepts and eight deflections.

ROUND 8 ON THE SUNSHINE COAST

The Round 8 clash proved to be another classic between the two best teams of the last two seasons. This time nothing could separate them. The Giants got off to another flyer, winning the first quarter 17-12. The Lightning once again settled and won the next two quarters to go into the three-quarter time break leading by one. The last quarter was a seesawing affair, with both teams leading and both teams having opportunities to take the win. But it was Caitlin Bassett who showed calm when needed, scoring the final goal to draw the game on the last whistle.

Bassett was a leading light for the Lightning, scoring 40 from 44 for 91% accuracy. She missed her first goal 13 minutes into the third quarter – up until that point she was 27 from 27. Jo Harten was just as impressive, finishing with 30 from 33. Harten scored nine from nine in the first quarter then again in the final quarter when the game was on the line. 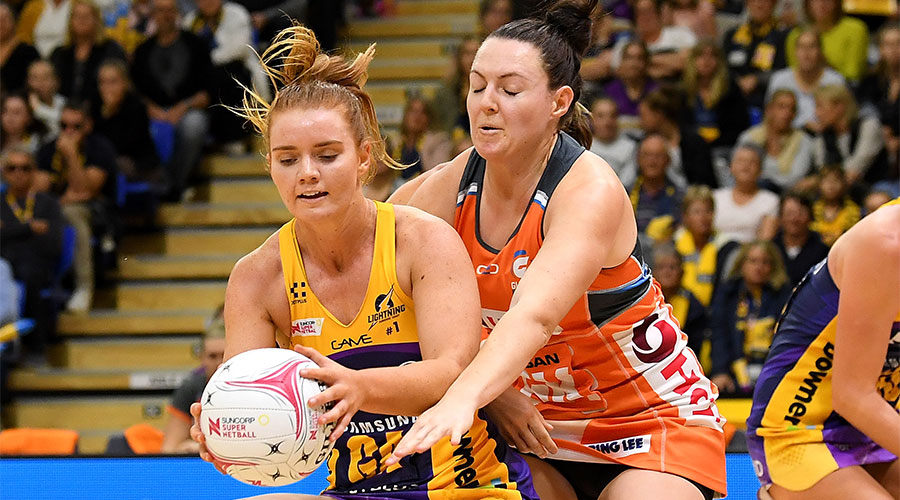 Both sides are filled with experience and internationals, but the Giants have a clear advantage in the number of games played. The Giants’ regular starting seven have played 954 national league games, including two 200-game players (Susan Pettitt – 231, Bec Bulley – 227) and Kim Green currently sitting on 197 games. If the Giants make the grand final she will finish the season on 199 games.

The Giants have been one of the benchmark teams all season, claiming the minor premiership, but they will be smarting from last week’s loss that cost them a chance to host the grand final. It was an opportunity missed for the Giants and they will be out for redemption. The Giants have the best first-half goal differential of any team, with +56, so they no doubt will be looking to continue that trend. Their fourth quarter, however, will be a concern for them with a -9 goal differential.

Both teams have strength across the entire court but you cannot ignore the 414 more games the Giants starting seven have played.  So another blockbuster is on the cards with two teams that don’t have a tomorrow if they lose. In a tight one, the Giants’ consistency, experience and they fact they will be smarting from last week’s lose (and last year’s Grand Final) that should be enough to get them home in front of a very large and vocal crowd.