NSW Swifts Coach Briony Akle talks about her climb to the top of the netball coaching ladder and her approach to giving directions.

Briony Akle can tell you many things but can’t pinpoint the moment it happened.

For when you ask the NSW Swifts coach when her coaching journey began, it’s akin to asking most people when they started breathing.

Akle reckons she has always been afflicted with the coaching bug.

Even as a junior growing up in Sydney’s northwestern suburbs her knack for giving directions was noted.

Bossing her two older brothers was just the start.

She guided emerging talent long before her playing days finished at the Swifts and there was hardly a time when she didn’t hold a clipboard.

“It made me a better player because I had to use my brain a bit more,” she said.

The early start to her coaching career provided valuable experience and tactical weaponry that snowballed as she progressed through the elite pathway.

Akle led multiple state age group teams, including a title-winning season with the NSW under-19s in 2015. 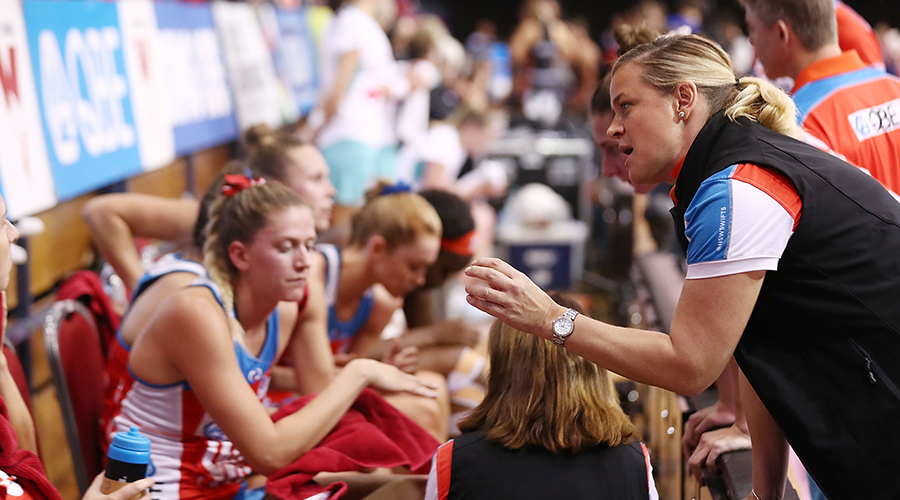 She coached the Waratahs in the Australian Netball League but it was not until she arrived at the NSW Institute of Sport in 2016 that coaching as a career seemed a possibility.

Working at the time in the community relations departments of NRL clubs Parramatta and the Roosters, she observed how head coaches in other sports could be 100 per cent immersed in their art.

But netball? That had been just a dream for her until the Swifts position opened after the departure of Rob Wright.

“I’d always hoped I’d get to this level,” Akle said.

“Because I’d worked in rugby league I saw (professional coaches) and thought that would be amazing. I loved the thought of it.

“I loved being paid to do what I loved.”

And she was the skipper under one of Australia’s most successful club coaches, Roselee Jencke.

So she has some context to draw on when she praises Akle for her poise under pressure.

“Listening to her at quarter-time and in time-outs, I’m pretty impressed,” the Channel Nine commentator said.

“She’s so calm and I like the way she empowers her players.”

Akle has benefitted from many mentors but singled out NRL premiership-winning coach Trent Robinson as a role model.

She sat in the coaches’ box for the Roosters’ Round 16 win against the Wests Tigers and counts Robinson as a strong influence on her style.

“Off the field they’re second to none. From the under-16s to the fulltime squad, they’re very respectful.

“He sees them for people, not just players and they know the history of the place.

Respect, accountability, love and freedom have underpinned what has been a successful Suncorp Super Netball campaign for the Swifts.

During the pre-season she challenged the players to leave behind the mentality that fighting losses could be worn with pride.

They had netball intellect and Akle argued why couldn’t they turn that into success.

“They’re really intelligent athletes and I’ve gotten to know what suits them and love having conversations with them about netball,” she said.

Akle credits being part of a household of a husband and four boys – including 10-year-old twins – for keeping her grounded.

The Swifts must keep themselves focused too, for they will be within reach of a breakthrough title when their season resumes against West Coast Fever on July 27.

Test stars Paige Hadley, Sarah Klau, Helen Housby, Natalie Haythornthwaite and Sam Wallace must leap off the World Cup rollercoaster if the NSW team is to win its first crown since 2008.

“They’re pros,” Akle said. “It all depends on injury of course but we expect they’ll come back and turn their focus on to the red dress.”