The West Coast Fever have knocked off the Adelaide Thunderbirds by 12 goals in a shootout at Brisbane's Nissan Arena.

The original is often the best and so it's been proved as the world's premier shooter Jhaniele Fowler led West Coast Fever to a 74-62 win against the Adelaide Thunderbirds in their Super Netball season launch.

Fowler did most of the damage of her 53 goals from close range on Saturday, barely needing the assistance of netball's innovative two-point Suncorp Super Shot to crush the Thunderbirds at Brisbane's Nissan Arena.

The towering goal shooter said she benefited from "getting netball out of my brain" in a stress free build-up to the game during which she shot two super goals.

Until Wednesday morning, Perth's Fever were preparing themselves for a season-opening showdown with the Giants in Sydney.

But games in NSW were rescheduled due to the coronavirus pandemic, with the Fever instead packing their bags for a Queensland assignment. 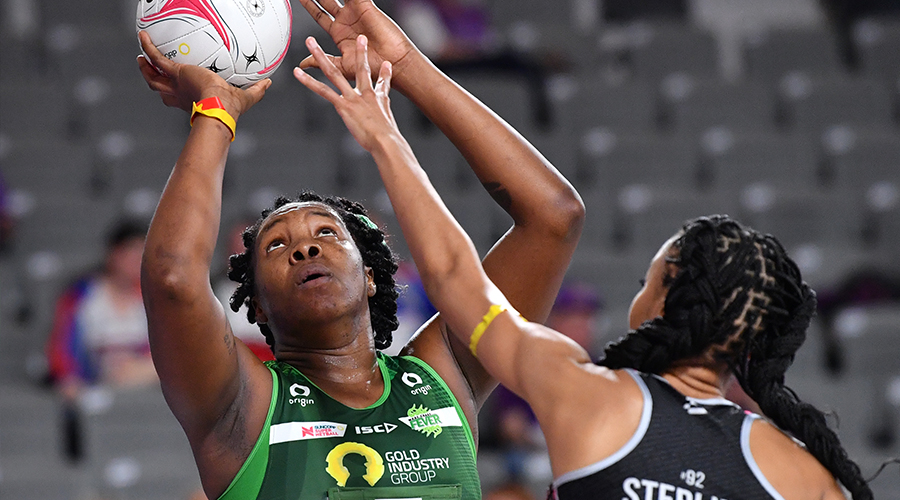 Fever goal shooter Fowler was the dominant figure in the first half. Her anticipated duel with Jamaican teammate, Adelaide's Shamera Sterling, was not the gripping battle the Thunderbirds had hoped for.

It was no shame Sterling was unable to tame the 198cm shooter whose strength and body positioning made her almost impossible to stop near the post.

The new look Thunderbirds, driven in the centre by Maisie Nankivell, pressured their opponents in the third quarter and stayed in touch thanks to a trio of super shots from Samantha Gooden.

Despite at ties fielding five internationals on the court, the Thunderbirds could not stay with the West Australians.

It was a rousing return to form Fever goal attack Alice Teague-Neeld who moved with confidence and shot four super goals in her 10-goal tally.

Teague-Neeld has in recent years endured the shooting yips but there were no signs of hesitation in the Round 1 performance.

"It's been a long pre-season (but) it was just a matter of going out there and having fun, because I really enjoyed that," the goal attack said.