It's hard to look past the Sunshine Coast Lightning as they prepare for their their consecutive Suncorp Super Netball grand final.

You don't earn grand final favouritism without good reason, and the Sunshine Coast Lightning will be heavily fancied to hoist a third premiership cup in a row when they take on the NSW Swifts on Sunday.

They're yet to be defeated in a Suncorp Super Netball final, with a stunning six-from-six record, and they beat their 2019 grand final opponent convincingly just two weeks ago.

But the Swifts have had another fortnight to prepare for the rematch, and can't be written off.

That said, it's hard to go past what the Lightning are bringing to the table. Here are five reasons why they're be victorious in the big one.

One of the big question marks over any team entering a grand final is how will they stand up under the pressure?

The Swifts won't know whether they're 'on' until that first whistle goes on Sunday, but the Lightning know exactly what it takes to win the big one, having done it the past two seasons.

And you can't put a price on that.

With stars all over the court for both sides, it's tough to single out one player as the potential difference-maker.

But by the same token, it's not tough at all.

Laura Langman was best on court in the semi-final a fortnight ago, and has proven time and again that big game performances are in her DNA. She was huge in the World Cup final and is almost unquestionably the best centre in the game.

In finals, her control and composure with every single possession is worth its weight in gold - she takes pressure off teammates and will quite happily work the ball around an extra 15 extra times getting it to the goal circle safely.

The Swifts ate up the Melbourne Vixens' nervous and rushed feeding to their goalers in the first half last week, but Langman simply doesn't throw those balls and rarely gives the opposition look-in.

She's also well and truly had Paige Hadley's number in their three clashes this year. Don't be surprised if she collects MVP honours again this week.

No, it's not at USC Stadium, but the Lightning would still much rather be playing in Brisbane than they would in Sydney.

There will almost certainly be more Lightning support than there will for the Swifts, and considering how important home court advantage is (just ask the Swifts last week), it certainly tips the scales in the Lightning's favour.

They managed to take home the silverware despite travelling to Perth last year, so remaining in their home state and own beds all week is a massive plus. 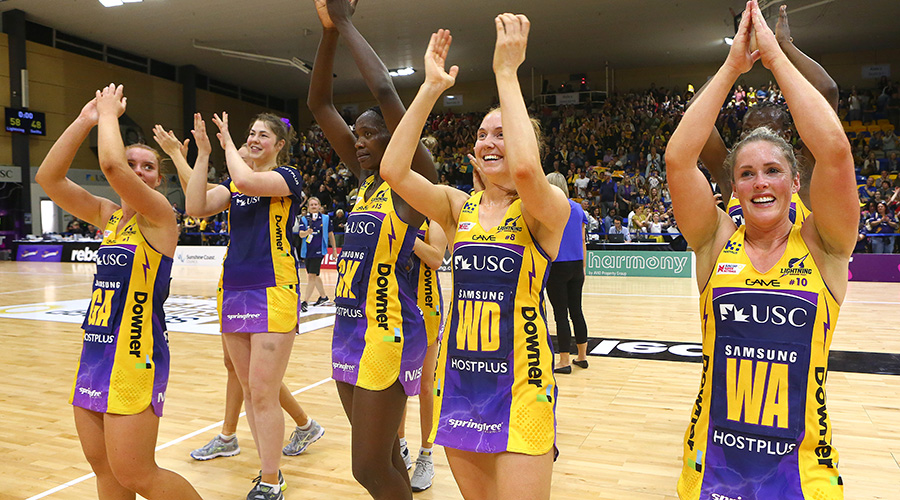 Ask any coach what the secrets are to premiership success, and "having your best players available" is almost always one of the first responses.

When you consider the misfortune that's struck the NSW Swifts throughout 2019, it's remarkable and an absolute credit to them that they've reached the grand final.

With captain Maddy Proud gone for the season, Natalie Haythornthwaite missing until after the World Cup, Helen Housby out injured for the three weeks leading into finals (and potentially still battling to be fully fit) and Kate Eddy missing for most of the year, they've copped more than their share of misfortune.

What was obvious in the semi-final was that the Lightning know each other like the back of their own hands. They know how they'll react in various situations and what their teammates are likely to do next, which is crucial in finals when the pressure is dialled up to 11.

But the Swifts looked lost when the heat was applied a fortnight ago, in part because their combinations are still

We've left the world's best goal defence until last, and with good reason: it's very likely she'll have the final say on Sunday as well.

Karla Pretorius has already proven she's a finals beast over the past two years, and she has the chance to add to her mystique further when she goes head-to-head with Helen Housby in a match-up that will go a long way to deciding the result.

Pretorius has lowered Housby's colours when they've faced off this year, with Pretorius averaging 80.7 Net Points (almost nine more than her season average), while Housby has averaged more than 10 points less against the Lightning than she has against the rest of the league.

Pretorius won't give Housby an easy ball for the entire game, which places more more pressure on Paige Hadley and Natalie Haythornthwaite, and then there's her unparalleled ability to create turnovers out of nothing.

If Pretorius really gets going, it'll be lights out.