There is a lot of uncertainty in the season at the moment but one thing that is certain is that these four individuals played a pivotal role in their team's victories in Round 11.

We have now entered the business end of the season with every result playing a crucial role on how the finals will be shaped.

With the ladder as tight as it is at the moment, winning games has never been more important. These four players impacted their respective matches in their own way that ultimately led to their team's triumph.

Here are your Round 11 Game Changers.

Every time I cover a Magpies game, I always come away thinking the same thing: is Jodi-Ann Ward the best GD in the competition?

Pretorius is probably at the top of most lists, but I think Ward should be climbing into that conversation, especially after her performance against the Vixens in Saturday’s Melbourne Derby.

She was everywhere and a very deserving winner of the Player of the Match award in this one, finishing with eight gains, three intercepts, eight deflections, a rebound and a game high 88 Nissan Net Points.

But the thing that made her my game changer for this one was the way she stepped up exactly when her team needed a spark, which is crucial in a tight contest like this one ended up being.

Her two gain and two deflection third quarter helped set her team up for the eventual four-point win. Particularly, her huge deflection in the dying moments of the quarter which slammed the door on an opportunity for the Vixens to score two-straight goals and regain the lead.

Ward brings such incredible energy and pace to this Magpies defensive end and her combination with Geva Mentor and Ash Brazill is a major reason why Collingwood are still in with a chance to play finals in 2021. 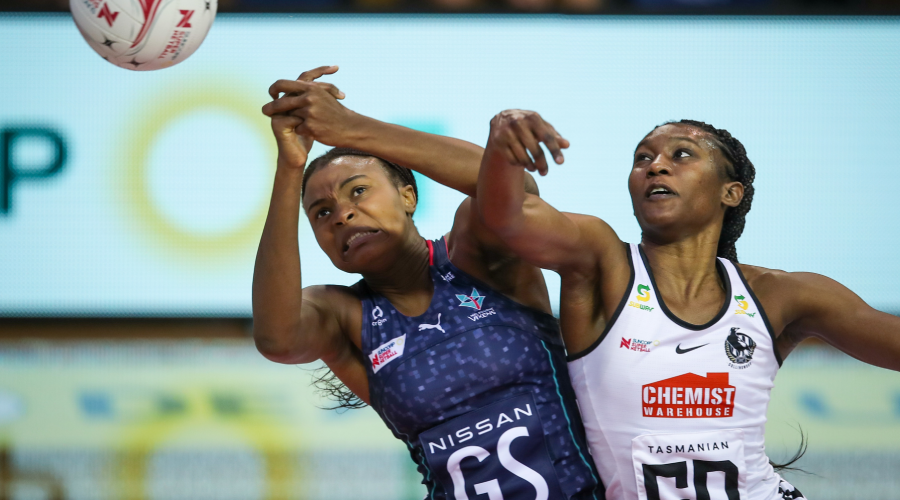 Nat Medhurst belted the nail on the head when she said “Maddie Hay has been instrumental for the GIANTS today” after the midcourter held the line late on a Swifts backward pass and flicked it over to a teammate to ice the game.

Plays like this have thrusted Hay into the Diamonds squad conversation this season, and rightfully so. She is dominating opposition defensive mids right now and looks set to finish the season near the top of the feeds and assists totals.

Her stat line was as impressive as ever against the ladder-leading Swifts, amassing 19 goal assists from 32 feeds, both of which were game highs, as well as leading the team with 77 Nissan Net Points.

But it’s her defensive effort and clean ball use that set her apart from the other 16 players that stepped onto the court in the second NSW Derby of the year.

Two gains, an assist and three deflections are not the kind of defensive numbers you expect to see from a wing attack in a game where neither team had more than 19 turnovers for the match, and her two general play turnovers committed over 60 minutes was an equal team low.

Forcing turnovers while making the most of every possession is the only way to beat this ultra-efficient Swifts outfit, and your main feeder is key to doing just that.

Hay gets the Game Changer nod, and the Player of the Match as well, but Sophie Dwyer might consider herself unlucky after playing what I think was her best game yet for the club. 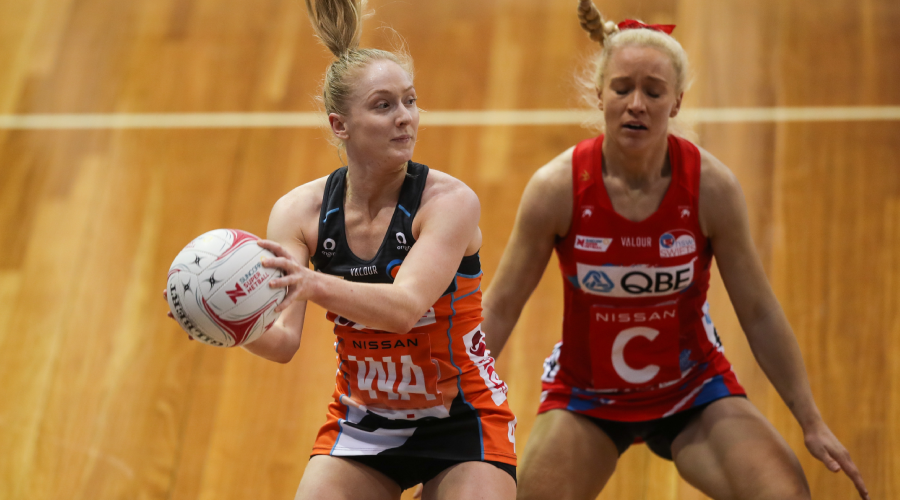 The Game Changer award is not always given to the player of the match, it is typically for the unsung hero who does their role for the team to influence the result. In this game, it was the defensive efforts of Sunday Aryang in the Fever’s 25-point thrashing over the Thunderbirds.

Whenever the Thunderbirds looked to be making a run, Aryang would consistently pop up with a timely defensive effort. Aryang finished the game with an impressive five deflections, four gains, three interceptions and no turnovers.

It wasn’t only Aryang’s defensive acts that influenced the game, it was her composure and confidence moving the ball out of defence that allowed the Fever to easily transition into their goal circle.

Aryang’s direct opponents in Sam Gooden and Georgie Horjus were kept to just 68% shooting accuracy, seven combined turnovers and were given no chance to impact the game.

Aryang was a training partner with the Fever for two years before being added to the extended squad in 2020. The young gun hasn’t looked back since and is now an important cog in this dominant Fever outfit. 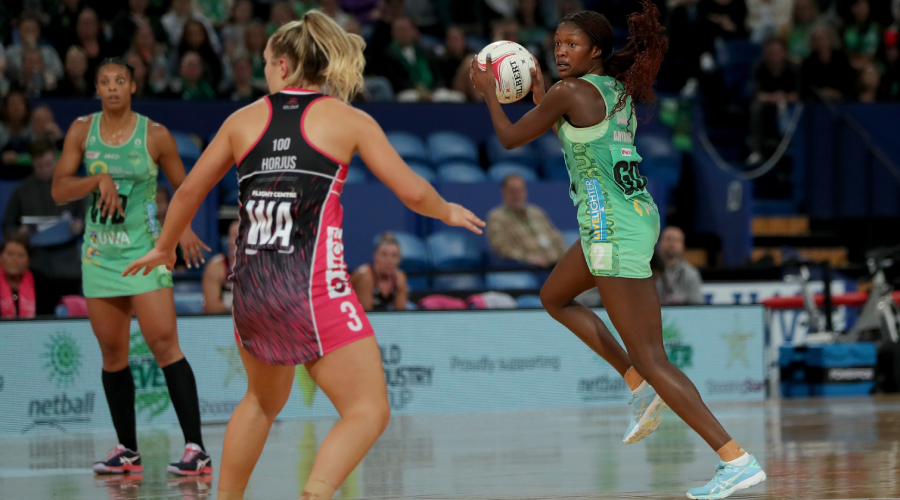 Now typically I like to find the player whose impact might have gone unnoticed or perhaps they played a specific role for their team that led to victory. But in this circumstance, the performance by Gretel Bueta on Monday night was simply too astonishing to pass up on.

With Tippah Dwan ruled out of this match just hours before start time, Bueta was required to play the full 60-minutes on the court. This is only the second time this season that Bueta has played the entire game, and she certainly didn’t let that opportunity go to waste.

Playing out of the GA position, Bueta provided the perfect combination to Romelda Aiken inside the goal circle. The athletic shooter finished the game with 18-goals on 90% shooting accuracy, along with a game high 26 centre pass receives.

This game was crucial for the Firebirds to win as they are now tied with the Fever in fourth position. If it wasn’t for the individual excellence from Bueta, who stood up for her team when they needed her the most, the Firebirds’ season may just as well have been over. 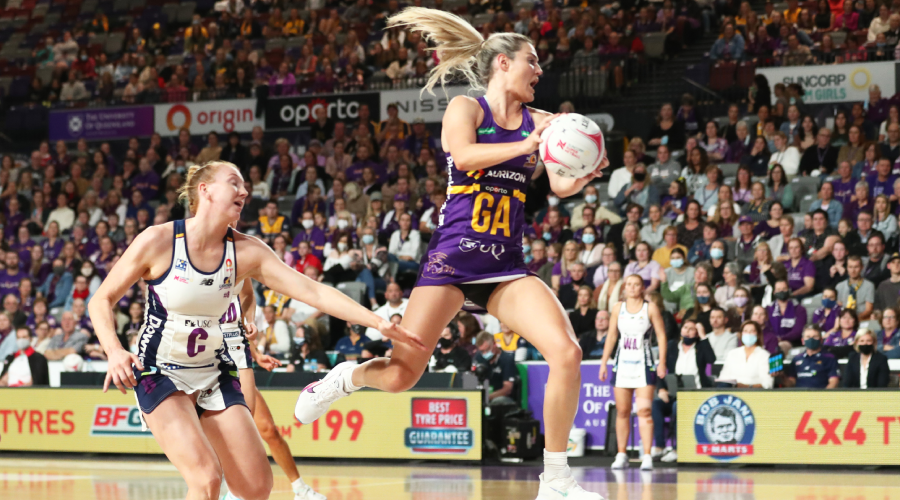