Round 5 dished up four Super Netball classics, each with some massive game changing moments. Who seized those moments and became our Round 5 Game Changers?

Two games decided by a shot after the siren, two finishing with just one-point separating the teams and another in the balance at the midway point of the final quarter. Round 5 was epic!

All four matches were there to be won, and these four game changers stepped up when their team needed them most.

Something amazing happened this morning. I woke up to begin my Game Changer article for the Vixens v Firebirds game to find it had already written itself. I arrived at the conclusion that this phenomenon occurred solely due to the unbelievable performance from Vixens’ debutant Rahni Samason.

To put this game into perspective, we must delve deeper into Rahni’s journey that brought the 23-year-old to her first start in the Suncorp Super Netball League on Saturday.

Samason was one of four netballers chosen by the Melbourne Vixens as a Training Partner for the 2018 Super Netball season. The young star was awarded MVP in the Australian Netball League in the 2018 season for Vixens’ affiliate team Victorian Fury. Unfortunately, Rahni suffered an ACL injury to her knee in 2019; and was unable to play in 2020 due to the coronavirus pandemic.

If it wasn’t for those setbacks, Samason would most likely already be on a roster. But then we would have been robbed of what was one of the best debut performances in recent years!

Samason only learned of her selection on the morning of the game; after Emily Mannix was sidelined due to a fractured knuckle sustained against the GIANTS last week.

There are few bigger tasks in netball than debuting in a match with minimal preparation, starting at goal shooter for a team yet to crack 55 points for the season and who has yet to win a game; as well as playing away against a team looking to bounce back from a disappointing loss last round.

You would forgive any player who shied away from the moment under those circumstances; except Rahni Samason said screw that and not only won the Player of the Match accolades, but also decided to win the game for the Vixens with a Super Shot after the final buzzer had sounded.

Now we aren’t trying to take away from the amazing performance from all the Vixens’ players and coaches in their first win of the season; however, Samason’s confidence and poise on the big stage in her first ever SSN game was simply too incredible not to award her the Game Changer.

I mean, the young gun even had the audacity to throw the ball off the post for her own rebound to score. Who does that in their first game!?

Samason ended the game shooting 93% from the circle, 80% from Super Shot territory, along with 10 goal assists and only one turnover. Not to mention a game winning shot. 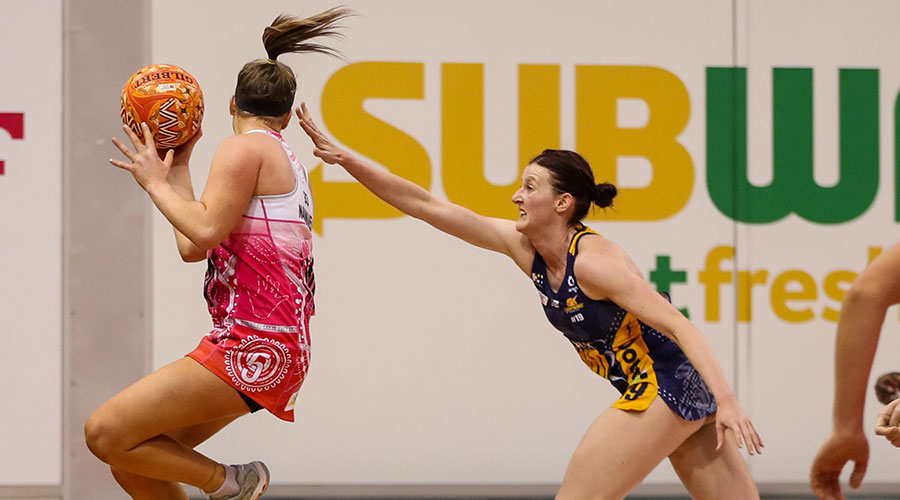 This was a tough one as there were so many moments in this see-sawing affair.

But I’ve gone with former Thunderbird Kate Shimmin, who came on late and completely changed the way this Adelaide attack had to play down the stretch.

The Thunderbirds feeders were having plenty of success getting the ball into Lenize Potgieter and Georgie Horjus by swinging the ball from one side of the shooting circle to the other, and the Lightning mids were struggling to shut it down.

Lightning Head Coach Kylee Byrne brought on Shimmin at wing defence after halftime, adding some length to that Sunshine Coast defence and forcing the Thunderbirds to take a more methodical approach in attack and transition.

Perhaps her biggest moment came at the midway point of the fourth quarter when she deflected and picked up an Elle McDonald pass just seconds after Shamera Sterling had come up with a massive gain. At this stage, with Adelaide holding a 49 to 48 lead, the Thunderbirds had all the momentum and seemed like poised to pull away from the Lightning. She almost did it again in the dying moments!

The added height she brings when playing WD came good again with just five minutes remaining. Adelaide had built a two-point lead and had the centre-pass, which eventually landed in the hands of Nankivell just inside the Thunderbirds’ attack transverse line. Shimmin was hot on her tail and shutdown that direct pass into the circle, forcing a cross-court pass which Maddy McAuliffe got a hand to, forcing a contact penalty.

In a match dominated by some of the biggest names in the sport, I think it was Shimmin who changed the game and sealed her former team’s fate. 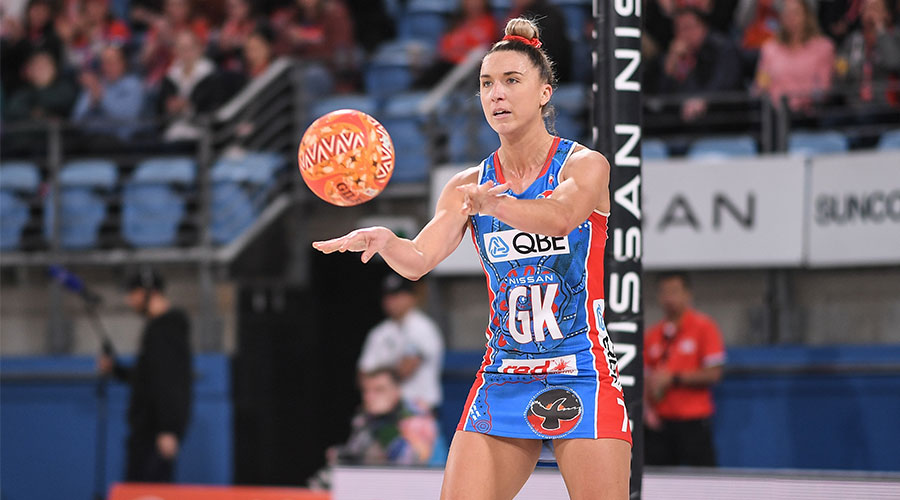 Annie Sargeant summed up my choice for the Game Changer of the Swifts vs Magpies match in two words perfectly: The General.

Sarak Klau, who was named the player of the match in this one, was immense on Sunday afternoon in her side’s win and had to be my selection for the Game Changer.

From the first whistle, Klau looked on against her tough match up in Shimona Nelson, but it was not until the final quarter that I had decided it was Klau getting the Game Changer tick. Notable mentions Tayla Fraser coming in at WA was a force to reckoned with, Paige Hadley doing what captains do best and Ash Brazill filling up the stats sheet and the highlight reels.

Klau’s final quarter was what did it for me. She truly was “The General” down in the defence end, racking up an impressive 76.5 Nissan Net Points, nine gains, seven deflections, six intercepts and two rebounds. She really asserted herself on this one and there was no way Klau was letting her side come out of Round 5 with a loss.

The moment that caught my eye happened in the final quarter, when Klau defensive effort on a feed into Nelson led to the ball going out of bounds which seconds later ended up in Sam Wallace’s hands and in for a goal. From here, the Swifts went on to outscore the Magpies 17-9 in a huge final quarter to cement their victory.

The cherry on top for Klau was when her dominance led to the Magpies leading goal scorer taking a seat on the bench for the final minutes of the game. 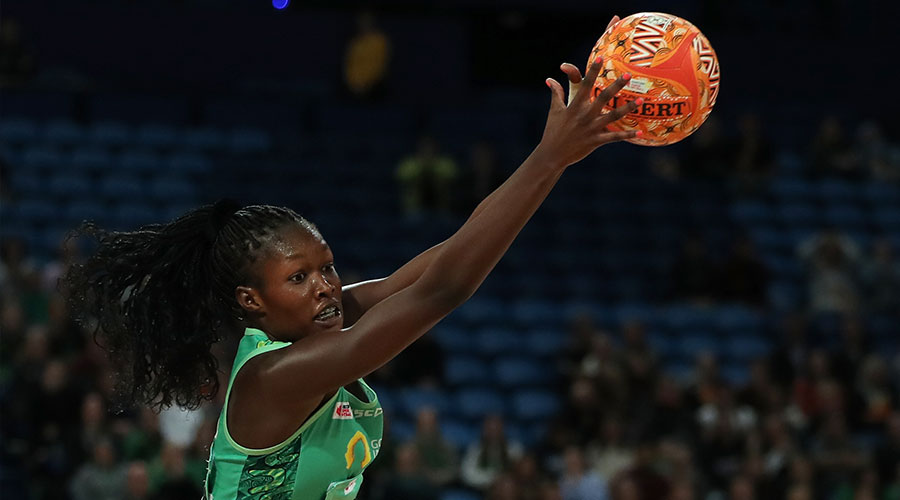 Jhaniele Fowler scored the game winner, Courtney Bruce got player of the match and Verity Charles got all the bruises, but Sunday Aryang is my Game Changer.

She had a really strong match throughout, on a player who has developed into a real handful in Sophie Dwyer, but her final quarter changed the tide of this ultra-physical 60-minutes of netball that was literally anyone’s game right up until the final siren sounded.

Three points down to start the final quarter and the Fever know that if they can wrestle momentum, and possession, away from a GIANTS team that has won just one final quarter so far this season they could pull off a comeback for the ages.

Halfway through the final term and the GIANTS are looking to add to a three-point lead through Amy Parmenter. Enter Aryang, who stepped in front of Parmenter’s hopeful lob forward to Dwyer for her third intercept of the match.

It was a massive moment in the match. A four-point lead may have just been a bridge too far for a Fever team that had been playing from behind all night against a GIANTS side who had really taken it to them physically.

From here the Fever would go on to score five points to one and take the lead for first time since the five-minute mark of the first quarter, and it was on from there!

In a game decided by a shot after the siren, there are always moments you can look back at that decided a match.

Had the umpire not called held ball on Jo Harten in the dying seconds and if they had of been able to keep the Fever from tying it up from the centre-pass, I probably would have given this one to Kristiana Manu’a, who picked off an Aryang pass with just under four minutes to play and the scores tied. But that was not to be.

It was a huge moment from a young player every Australian sports fan should be excited to see more of in the future.