The second week of Indigenous Round provided us with plenty of fireworks, particularly from these four players, who we have named the Game Changers for Round 6.

Another of Super Netball means another four Game Changers, and this one has a very Australian feel to it. There’s even a bit of Diamonds selection talk in here!

Check out who we choose as the Round 6 Game Changers and who we think might be making the Diamonds selectors think twice about up-coming squad selections.

This award could have gone to either one of the Fever players in their huge win over the Magpies, but I went with a player who truly deserves the recognition – Sasha Glasgow.

Glasgow is a keen competitor and one of the country’s most exciting young talents. Sasha was awarded the 19/U National Championship MVP back in 2016 and represented the Australian 21/U team at the World Youth Cup in 2017.

Sasha clearly has the potential and was in and out of the Thunderbirds line up through injury during her time in Adelaide. Glasgow made the decision to move to the West Coast Fever in 2021, having recently commented that “I had a good feeling about coming over west and just took it, rolled with it and have loved it ever since.”

Having departed from the Thunderbirds after four years, Sasha earned her first start for the Fever on Saturday, much to the delight of their fans.

Jhaniele Fowler was unstoppable in the Fever’s blowout victory, shooting at 98% from 60 goal attempts. Player of the Match Courtney Bruce was also phenomenal in defence, finishing with an unrivalled 114 Nissan Net Points.

However, this game was over at half time; and it was the sharpshooting of Glasgow who was instrumental in the opening half demolition.

Anytime Collingwood looked to be making a run in this game, Glasgow would always pop up to put a dagger in the hearts of Magpie supporters. The 22-year-old caught fire from the Super Shot zone, scoring four two-pointers from four attempts to give her team the highest half-time total of the season; and effectively putting any chance of an upset Magpie victory to rest.

If Sasha continues to shoot consistently from the Super Shot zone, teams won’t be able to back off of her, which will open the circle up even more for Fowler.

Glasgow, who has had to battle many adversities in her short Netball career, demonstrated the poise and confidence of a seasoned veteran throughout the match, making the most of every opportunity that came her way.

Not only was Glasgow damaging with her shooting, but the GA ended the game with 23 feeds, 16 goal assists and two rebounds, showcasing an exciting one-two-punch combination with Fowler.

It’s fantastic to see Sasha enjoying her Netball and contributing to the Fever's sensational start to the season. 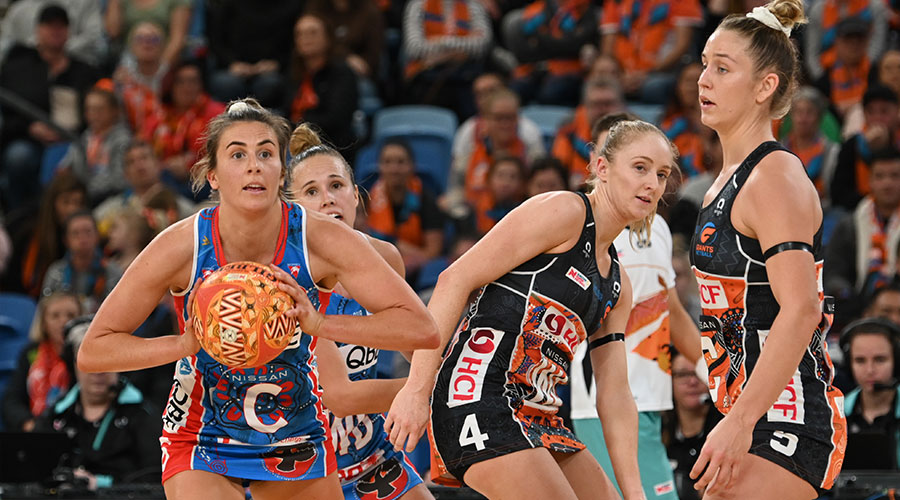 I could have given this one to any of the NSW Swifts players that took to the court against the GIANTS.

Maddy Turner and Sarah Klau held the high-scoring GIANTS attack end to their lowest scoring total of the year, which definitely deserved a nod. Likewise, Paige Hadley’s massive game on one of the league’s best feeders in Maddie Hay. And the ever-impressive Sam Wallace, who had her third perfect shooting game so far this season, is always in contention for a game changer write up.

But I’ve gone with returning Swifts co-captain Maddy Proud, who’s 60 minute grind against one of the toughest competitors in the sport helped her team bring home the Carole Sykes Memorial Trophy.

One of the GIANTS biggest issues in the first NSW derby of 2021 was their inability to move the ball smoothly through the middle of the court, and the Swifts fearless leader played a huge part in that. This stunted service into the GIANTS attack end, which hadn’t scored less than 65-points prior to this game, translated into Jo Harten, Sophie Dwyer and Maddie Hay combining for 13 general play turnovers, which killed them as they tried to chase down the Swifts.

To go with her relentless defensive effort, Proud also provided plenty of gold service for her shooters, who shot an incredible 63 from 63 for the day. Proud led her team with 28 feeds into the circle and only Helen Housby had more goal assists for the Swifts than her 18.

She set the tone for the Swifts yesterday and her patience and decision making with ball in hand and unyielding defensive pressure changed how the GIANTS had to play, and how many saw this game playing out. 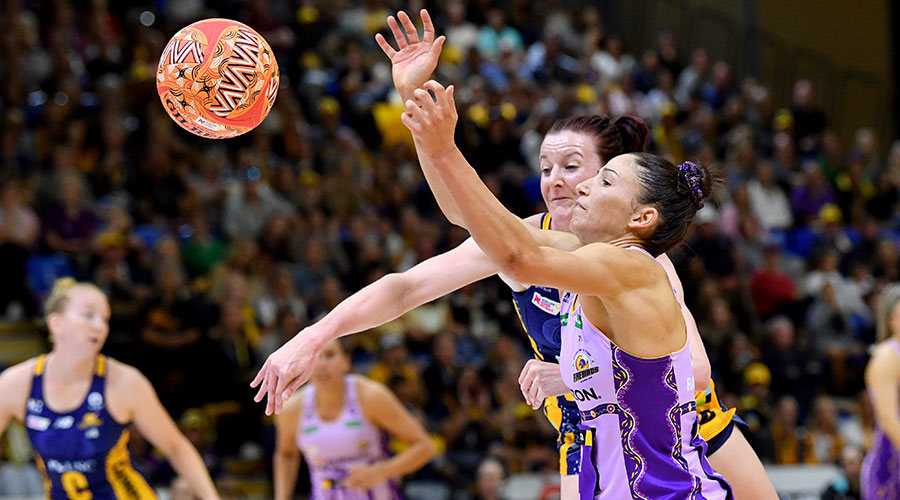 I promise I’m not always going to take the easy route and write about the Player of the Match for my Game Changer selections, but I cannot go past Kimmy Rav’s performance in the Birdies super important win over the Lightning.

Ravaillion was an absolute workhorse in the centre position for the Firebirds and she has continued to show why she is one of the best in the business.

With the Firebirds’ season hanging in the balance and the top four sides seeming to break away from the rest, they needed a win, and their relentless centre did everything she could to get it.

She played a full 60 minutes in the middle, received the PotM accolade and earned a cruisey 81.5 Nissan NetPoints. On top of that, Ravaillion dominated across all three thirds, finishing with 26 feeds, 20 goal assists, one gain, one intercept, one pickup and zero turnovers.

Most importantly she forced the Lightning to change their midcourt plans, going through three different opponents over the afternoon. She started the game against Mahalia Cassidy but forced her to the bench when her turnover count sky-rocketed early. Laura Scherian gave it a crack next but did not have the impact the Lightning were searching for. And Maddy McAuliffe made three, and she did breathe some light into the Lightning midcourt but still could not contain a Rav on a mission.

Join me for a round of applause for Ravaillion, what a game!

But the question looming, will she be knocking on Stacey Marinkovich’s door come Diamonds time? In this kind of form, a known championship winner and leader with experience on the world stage is going to be hard to look past her if she continues the way she is going. 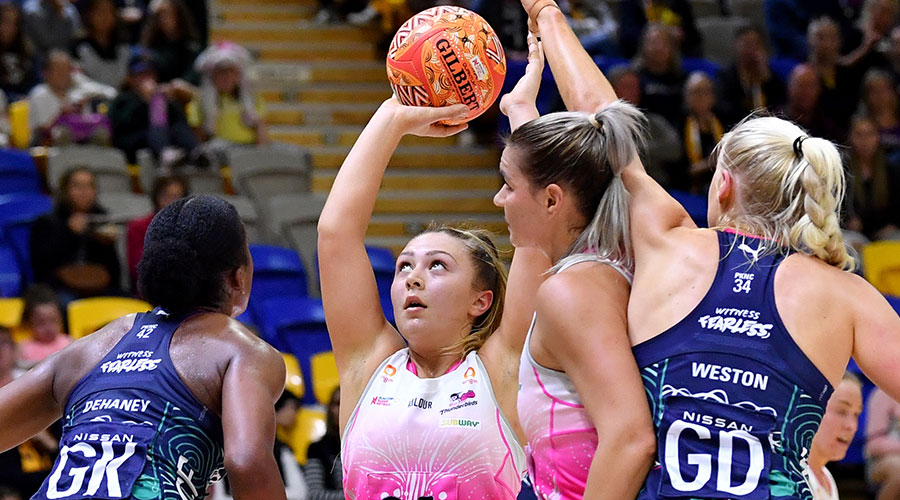 Swagger is such an important part of sport. Backing yourself and having the courage to take the game into your own hands and get creative is what separates good and great players.

Jo Harten has swagger. So does Shamera Sterling. And, make no mistake about it, Georgie Horjus has swagger.

And it was on full display against the Vixens, particularly when the game was on the line in the final quarter. When she is feeling it in attack, as Laura Geitz said after the match, “she’s fast, she’s dynamic and she sets up play” and her teammates can’t help but come along for the ride.

She finished with a healthy stat-line of 12 from 15 shooting, for 12-points plus 21 feeds, 17 goal assists, a gain and 64 total Nissan Net Points. But this Game Changer nod is about so much more than stats.

The give and goes with the feeders as she explodes into the circle, her defender-stunning flick passes which open up so many easy shots for her shooting partners, and her ability to hit shots from anywhere make her one of the most exciting prospects in the country.

The Thunderbirds came into the final quarter with just a two-point lead over the Vixens and they knew the “home” side would be coming hard for them in the final 15. And it played out just like that in the opening few minutes, with the teams trading goals. Until Horjus hit four straight to stretch the Adelaide lead out to five with ten minutes remaining, essentially slamming the door shut on this one for the Vixens.

There has been a lot of talk about GIANTS midcourt star Maddie Hay potentially being in the mix for a Diamonds call-up this summer, given her play and injuries around the league. But do not be surprised to see G. Horjus on the squad list of whatever international test series we all have to look forward to later this year.