Any round that involves a top of the table clash, a state derby, a big upset and an offensive showcase needs some big game changers, and that's exactly what we got in Round 7.

Seven rounds down, seven to go as the 2021 Super Netball season hits the midway point. Wins in Round 7 are crucial as all eight teams set their collective sights on finishing the season strong and setting themselves up for a championship run.

Crucial wins require game changing performances, and these four were not going to let their sides come away from Round 7 with a loss.

I had a great time covering this match, but jeez… what shambles!

The two teams combined for 47 general play turnovers, the clock ran up for the first quarter and a half, then disappeared entirely and took the score with it until the final quarter. Hats off to our commentators Annie Sargeant and Cath Cox who expertly navigated this minefield of the game.

It was scrappy stuff, particularly in the goal circles, where both defensive groups monstered the shooters for much of the afternoon. For the Sunshine Coast, Sam Poolman and April Brandley were having a field day on Steph Wood and Cara Koenen, combining for seven gains through the first three quarters.

The Lightning needed a big target to help settle down this game and to take it to this GIANTS defence. Someone they could depend on to snatch those high feeds out of the air and keep the scoreboard ticking over.

Kylee Byrne’s decision to move Wood to WA, Koenen to GA and bring on Peace Proscovia turned out to be the match winning move, and Proscovia’s 16 points from 16 shots in the final quarter more than earned her our Game Changer tick for this one.

And it was a brave move from Byrne because Proscovia has struggled over the last season and a half to come on and make a real impact on the game. The way she plays the goal shooter position is very different to the way Koenen does and it seems like her teammates can struggle to adjust.

But her more traditional holding style worked perfectly in a game where simplicity and calm heads were needed to take the win.

When the rest of the game was crumbling down around her, Peace Proscovia came on and stuck to the plan, changing this wild game in the process. 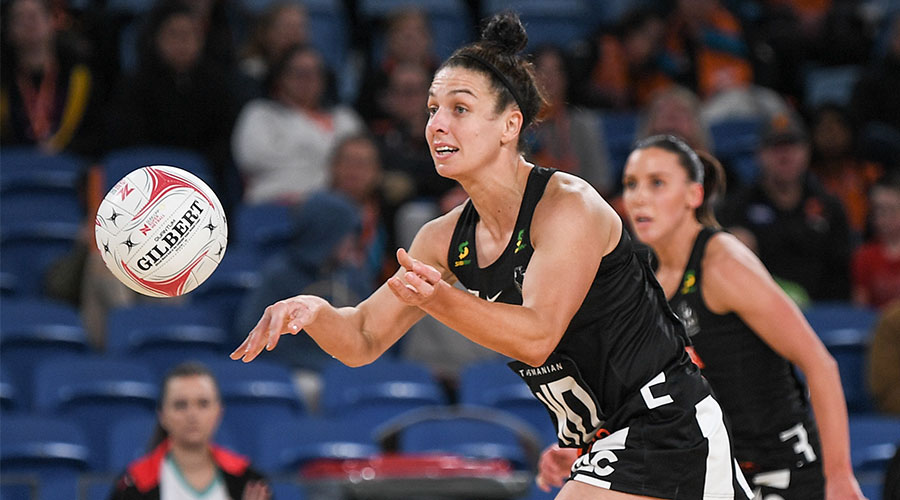 It was always going to be a tense and high-pressure match between the two Melbourne sides, especially considering both teams find themselves positioned at the lower end of the ladder.

Defence hasn’t been the strongest aspect for either side in 2021, with the Magpies and Vixens last and second last, respectively, for goals against in the competition. This meant that whichever team was able to tighten things up on the defensive end, would be well on their way to winning the game.

And in the end, it was the Magpies who lifted their defensive pressure and output over the Vixens. This was mainly due to the determined effort from our Game Changer – Ash Brazill.

The Collingwood WD has been as consistent as they come in 2021, and her performance in Saturday’s Melbourne Derby was nothing short of inspirational.

To put it simply, Brazill was everywhere! If you didn’t watch the game and peeked at the statistics afterwards, you wouldn’t be blamed for thinking she had minimal impact on the result. However, it was the things Brazill was doing without the ball that tipped the momentum in the Magpies’ favour.

Ash’s presence in the defensive third caused headaches for the Vixens’ attack, pouncing on loose ball after loose ball. And when Brazill wasn’t earning herself deflections or gains, she was limiting her direct opponent from having an impact on the match.

Hannah Mundy started at the WA position for the Vixens but couldn’t seem to find her rhythm going up against Brazill’s relentless pressure. In the end, a change was forced by Vixens’ coach Simone McKinnis in the second half, with Mundy moved to the interchange and Kate Moloney taking the WA bib.

Mundy and Moloney were only able to record 16 goal assists between them, showcasing the amazing defensive effort from Collingwood. Jodi-Ann Ward and Geva Mentor were rocks in the defending circle all game, but Brazill’s continuous pressure and energy, particular in the 2nd and 3rd quarters when the game was won, was the main reason in the Magpies breaking a three-game losing streak against the Vixens.

Brazill finished with six deflections, two gains and just one turnover in what was a scrappy affair. Ash continues to be an unsung hero for the Magpies and a fan favourite across the league. 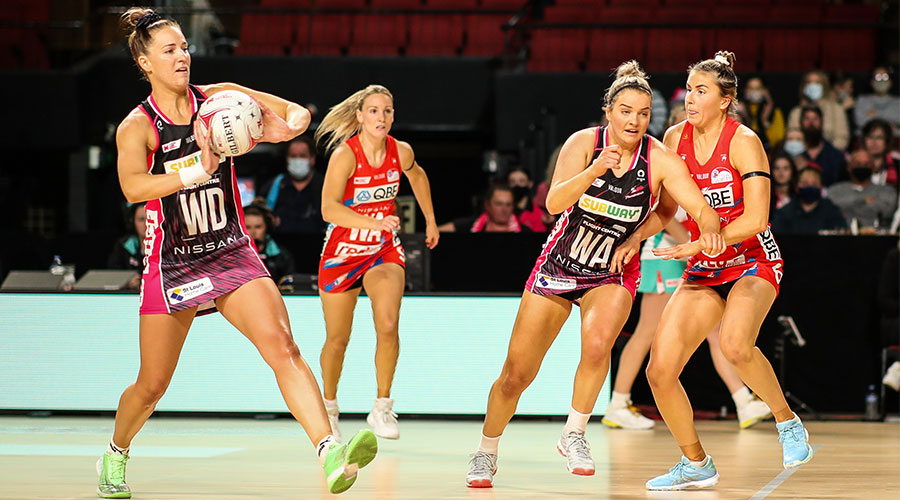 I have gone and done it again, I have picked the Player of the Match for my Game Changer, but I would like to profess that I had picked this particular player by half time.

In what was a massive win for her team in 2021 and one of the best for their club in the Super Netball era, Shadine van der Merwe was elite in front of the home crowd at Adelaide Entertainment Centre.

Seriously, van der Merwe, way to set the tone for the Adelaide Thunderbirds against the top four side in the NSW Swifts.

She was on court for a total of 51 minutes and every second she played, van der Merwe was making an impact. She was causing headaches for the Swifts all down the court earning herself four gains, four intercepts, one deflection and one pick up.

Never underestimate the power a wing defence has and their ability to cause a ruckus, van der Merwe was able to shut down Nat Haythornthwaite early and then followed up by keeping Maddy Proud quite for the remainder of the match.

She is a heart and soul type of player and to complete her stellar performance, van der Merwe went and earned herself and rightfully so, the Player of the Match accolade.

Also, I need to give a special mention to Shamera Sterling in her 50th national league match, she was an absolute force down in the goal keeper position who was in the mix for my Game Changer this week too. 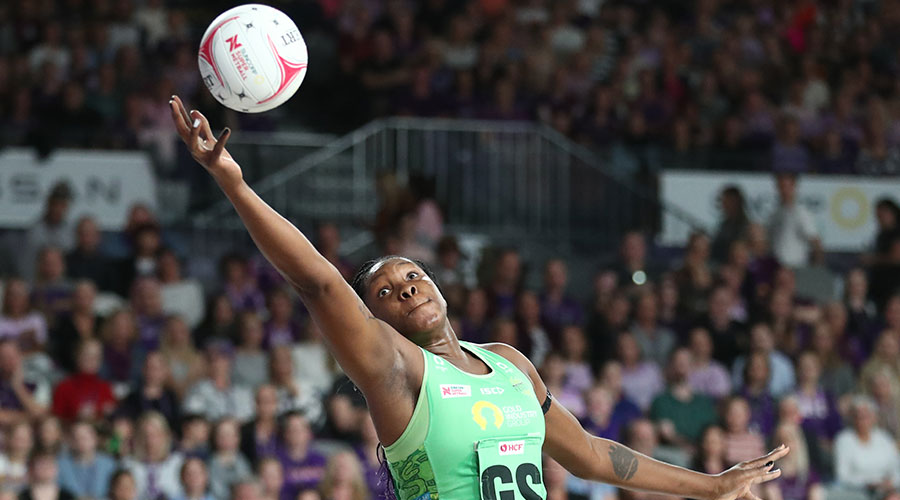 We’ve been doing this for seven rounds now and, for some reason, it always feels dirty to even consider choosing the goal shooter as the Game Changer, and now I’ve gone and done it twice in one week!

But, come on, Jhaniele was the difference in this one.

Particularly her huge third quarter, which really blew what was a tight contest in the first half out into a really impressive win for the undefeated Fever.

There was just three-points separating these two in the early stages of the third, and you could sense the Firebirds were coming. Up until this point, the Firebirds had played Fowler and the entire Fever attack really well, confusing the space and forcing the big Jamaican high more often than we’re used to seeing. She wasn’t having any of that in the third.

She was in position early and her feeders were getting it in there quick, allowing her to create one-on-ones with Tara Hinchliffe and exploit the space behind. And as we know, not even the fictional lovechild of Laura Geitz and Liz Ellis could defend Fowler when the ball’s coming in early and the game is in the balance.

She hit 19-straight in third, blowing the lead out to seven at the midway point, scored 41 of her eventual 126.5 Nissan Net Pointsa and, despite some brilliant Super Shooting by Tippah Dwan, essentially ripped this game out of the Firebirds’ reach.

She ended the game with 62 total points from 64 shots, 36 of which came in the second half when the game was on the line.

Weird thing to say about the player who has been named the league MVP three times in a row, but we don’t give Fowler enough credit. She is a match winner, a defence destroyer and the definition of a game changer.