For a season that could have taken a nosedive early after Kiera Austin’s Round 1 injury, the GIANTS came away from 2021 one win short of the club’s first premiership and with its future looking very bright.

Sophie Dwyer emerged as one of the country’s brightest stars while filling in for Austin and was eventually named the Rising Star at the Australian Netball Awards.

Tilly McDonell proved she’s ready for a bigger role in this new-look defence and that young midcourt might just be the best in the league.

We’ve got two keys to success for the GIANTS this season, and they are pretty obvious…

Lock down the best combination in that new look defence as early as possible. With Kristiana Manu’a and Sam Poolman leaving the club at the end of 2022, this is a completely fresh defensive group. Is it McDonell and April Brandley? McDonell and new recruit Lauren Moore? Moore at GK? We’re confident Julie Fitzgerald will sort it out.

And don’t let last year’s tough finish bring you down in 2022. This squad is ready to lift the trophy, unfortunately 2021 wasn’t the year 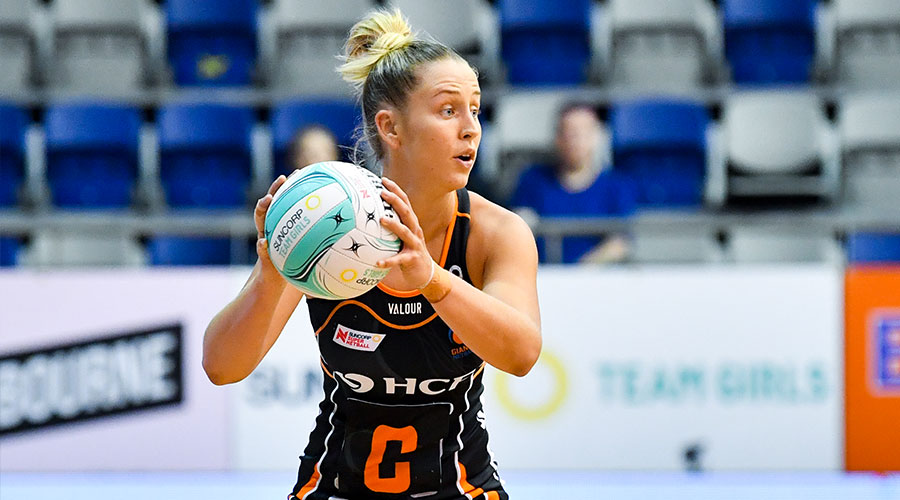 Jeez this is a solid starting seven.

After a few seasons of being the league’s best hype-builder, Tilly McDonell gets to show us what she’s got as the starting GK of the reigning minor-premiers. She’s confident, passionate and has the size and skill to take it right up to the best shooters in the league.

April Brandley was unbelievable last year, never letting the starting GD position go after being given the opportunity to start while Manu’a was out to start the season. She finished in the top ten for deflections and defensive rebounds and also racked up 21 intercepts.

Lauren Moore is an awesome player to have as a back-up and could easily start at either defensive position. Don’t be surprised if she pushes her way into the starting seven at some stage this season.

In Amy Parmenter, the GIANTS have one of the most exciting young players in the competition at wing defence. Fast, smart and ultra-fit, Parmenter finished in the top ten for intercepts, gains and deflections in 2022, an unbelievable feat for a midcourter.

Vice-captain Jamie-Lee Price can play anywhere through the midcourt, but is at her best when running the centre. Her aggressive, attacking style of play works perfectly alongside Parmenter, as the two form one of the toughest defensive midcourts to breakdown.

And to top it all off, you have Maddie Hay, who is coming off a gigantic 2021 performance. She led the league in centre pass receives and feeds, had the second most goal assists and third most Nissan Net Points. She’s unbelievable.

The reigning Rising Star of the league Sophie Dwyer starts at GA, and what a career building year she had in 2021. She stepped into the hole left after Austin’s injury and didn’t just hold her own, she dominated, firing in the second most Super Shots, finishing ninth in total points scored and hitting the ninth most total goals.

And last but not least is one of the best players in the world and GIANTS captain Jo Harten. She can do it all, play the holder, play up, lead the league in Super Shots, rebound and coach! An absolute gun and problem number one in a list full of problems for the opposition

The GIANTS can’t complain with this fixture, with four away matches in the opening half (including an “away” match against the Swifts) and four at home in the final seven.

The Grand Final rematch opens the GIANTS season, and it should be an unbelievable match. Neither side have played in NSW since Round 8 last season, so expect a big crowd at KRA and plenty of emotion.

Road matches against the Thunderbirds and Vixens follow the season opener before the GIANTS return to Sydney for a three-game home stand against the Firebirds, Magpies and Fever.

And the opening half of the season comes to a close on the Sunshine Coast, with a Sunday afternoon clash against the Lightning.

Five wins should be the halfway point target for this strong GIANTS side, with revenge against the Swifts, a strong showing in front of the home crowd and at least one win on the road a must.

The second Sydney Derby kicks off their run home, before the second short turn around period of the season mixes things up.

It’s back to KRA to play Adelaide, up to Brisbane to face the Firebirds and the regular season comes to a close for the GIANTS with a Saturday night beauty against the Sunshine Coast Lightning.

There are a few really crucial runs in there for the GIANTS, particularly that three game home run in the first half of the season and the second midweek round period against the Vixens, Magpies and Fever.

If they can successfully navigate those two sections of the fixture, you’d shocked if the GIANTS aren’t right in the mix for a finals spot again in 2022.

With a group of players this good, it’s almost impossible to envision the GIANTS not being serious contenders again in 2022.

And, with a fixture that never sees them play more than two matches away from Ken Rosewall Arena in row all year, they can really make themselves comfortable at home.

The only thing holding them back from us predicting them to be our minor-premiers in 2022 is some question marks in defence with a few new faces in the group.

They are a very dangerous second on the ladder for us.