Learn more about the stories behind the eight Indigenous Round dresses our teams will wear for the next two rounds. 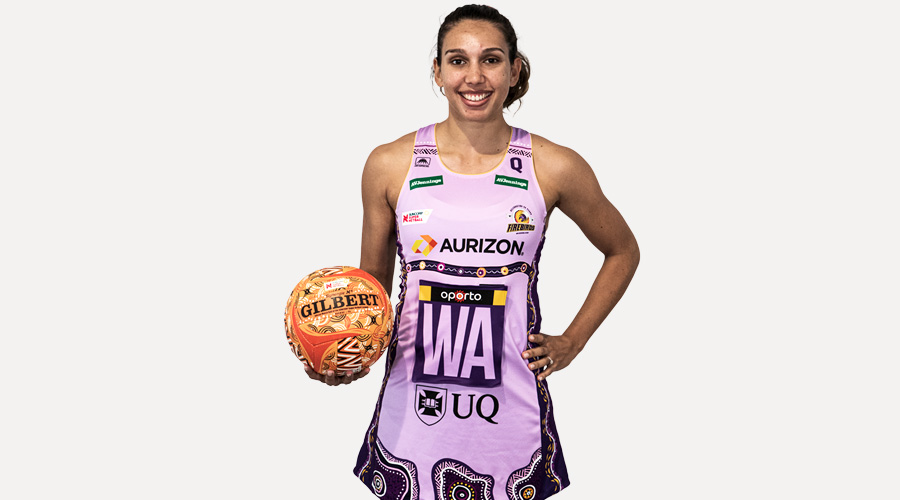 The Queenslad Firebirds are more than the 7 players on the court at one time. Every step or pass you make, is ignited by those who have come before you and the people who show support.It is the strength in diversity that fuels unity, maintaining balance and harmony on and off the court. You are vessels for change, awareness and equality, each pass connecting different stories and identities. Your roots strong in the Queensland landscapes. With every game you bring fire, and at every final buzzer, comes new growth. 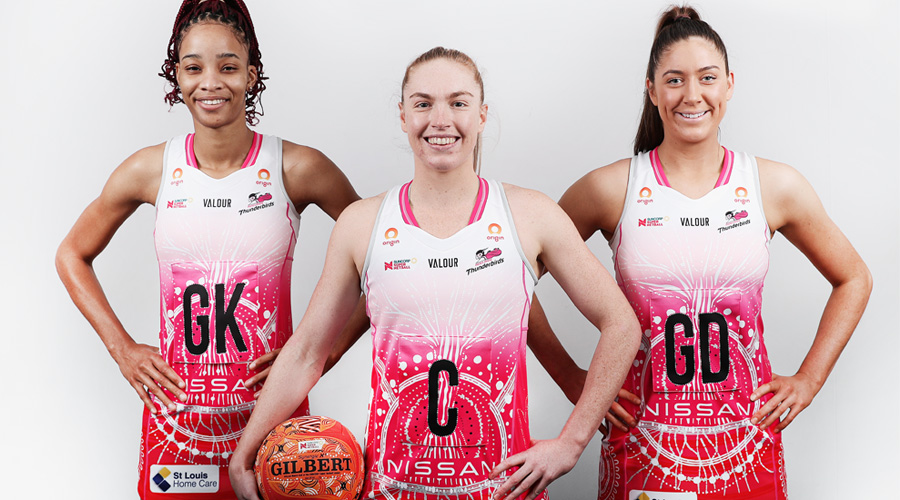 A local South Australia artist, Shane Cook was commissioned to design the 2021 Adelaide Thunderbirds dress. Shane, who was also South Australia’s 2020 Younger Achiever of the Year, worked with our Netball SA SAASTA students (South Australian Aboriginal Secondary Training Academy), Aboriginal Netball Academy students to develop the concept for the artwork.  FYI – Shane also designed the 2020 Adelaide Crows guernsey. The 2021 dress includes both pink (Adelaide Thunderbirds) and red (Netball SA), as a tribute to the Adelaide Thunderbirds connection to its grassroots. The dress features translated language by and the handprint of Mahleaha Buckskin - who is the first person (she is approximately 10 – we will need to confirm) to be raised speaking Kaurna (Adelaide is on Kaurna land) language from birth in at least 100 years. 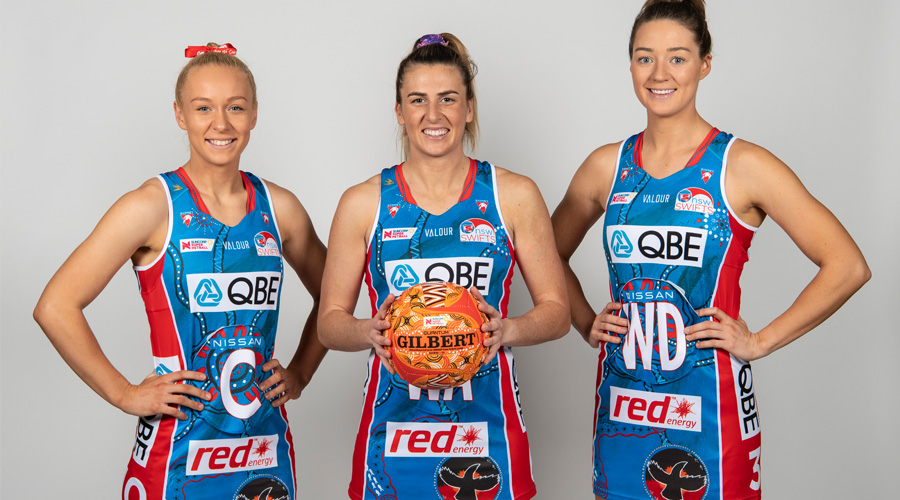 Meaning behind the 2021 Dress (Designed by Tarsha Hawley):

As a proud Indigenous women I feel very privileged to have been given the opportunity to design the NSW Swift’s Indigenous dress for 2021 Season.

The story behind the design:

I am from a small country town of Nyngan situated near the centre of NSW’s outback. From the Aboriginal tribe of the Wongaibon people, of which the crow is their totem. Behind the crow is the Aboriginal flag, these are two important parts of my culture and heritage, knowing where I come from and embracing who I am.

The concentric circle represents a meeting place, gathered around the meeting place are ten women which symbolises each player in the NSW Swift’s. The lines that connect with the women are lines representing their journey, each line is a different length because no athletes journey is the same. Some short, some long, some with setbacks, some paths took longer than others to achieve but together each athlete brings their own unique story to the team.

A combination of circles symbolises the waterhole, linked together with wavy lines meaning “water”.

The waterhole represents my hometown, the roots of my culture & the beginning of where my life begun. Nyngan is an aboriginal word said to mean ‘long pond of water’.  Along the side of the waterhole are fish which also interacts with the traditional owners of the land of which Sydney Olympic Park, home of the NSW Swift’s is based this is situated on the land of the Wann Clann tribe. In the middle are three wavy lines which represents the symbol of water.

The lands of the Wann Clann people also runs along the Southern Shores of the Parramatta River. Fish also symbolise Aboriginal culture along with black snakes and bush plums, they were among many food sources from the rivers, swamps and land Aboriginal people used to survive.

Along with this are stars which represent our ancestors and sprits. Aboriginal people used the stars for navigation purposes and as a calendar for hunting and gathering of seasonal foods and provisions.

I’ve used handprints which symbolises “Youth” within this story. Acknowledging the next generation of not only athletes but also for young Indigenous girls who inspire to be one day a professional athlete.

As an Aboriginal women myself coming from a small rural community, I hoped that one day that my dreams could be possible, I would of never imagined to be where I am today. It has taken a lot of hard work and determination but I feel truly blessed to have achieve what I have done so far.

I am hoping that I can inspires other Indigenous girls to follow their dreams, work hard and dedicate themselves to achieve what they truly desire.  I hope looking into the future, we see our people represent our culture, being identified amongst some of the Suncorp Super Netball or for the Australian Diamonds players and competitions.

The concentric circles in the background represent communities.

Whilst each community is culturally independent from their neighbours all groups had a connection through sharing songs and stories, ceremony and even country in some special places. 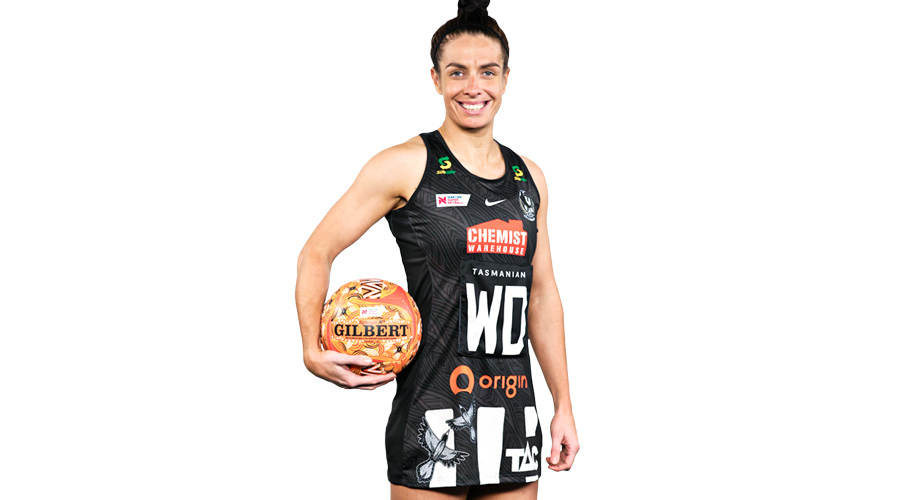 The design shows both magpies flying onwards and upwards, with outstretched wings, reaching new heights and possibilities. Magpies are nurturers who guide their young, playing a role similar to that of teachers, elders or respected persons. This guiding role is important to Aboriginal communities and families who learn, listen and adhere to the teachings of their old people. Cultural practices teach values, and are learnt through connecting to stories, song, land, people and community and it guides everything that the community does.

The background pattern of the design features gum leaves which represent cultural and personal growth. They meander like a river formation, signifying pathways and life's journey. Gum leaves are significant to the Traditional Owners, the Wurundjeri of the Kulin Nation, whose land Collingwood is a part of. The leaves are used in 'Welcome to Country' ceremonies and are extended to guests as a gesture of 'Welcome'.

Patten is also the artist behind the logo for the Barrawarn Program, the key Aboriginal and Torres Strait Islander community program run by the Collingwood Football Club Foundation. His designs were featured on the 2014 and 2015 Collingwood Indigenous Round guernseys. 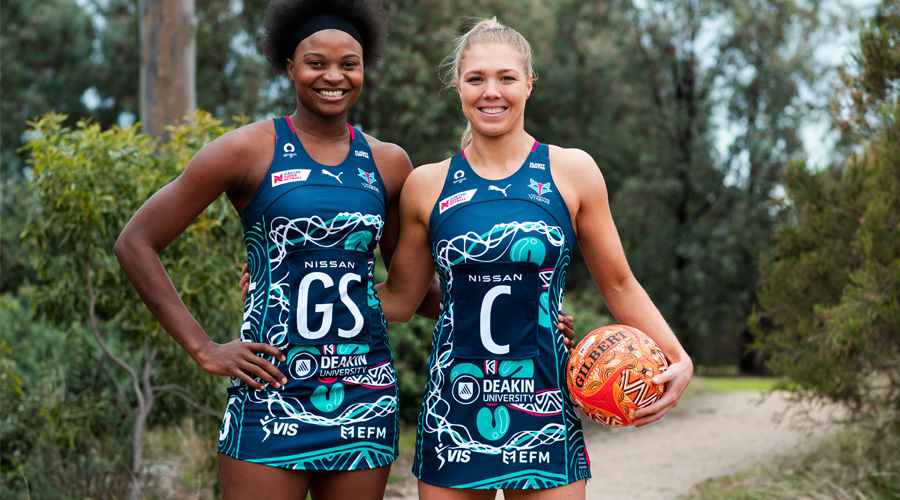 Returning to community netball: encompassing our Netball Victoria community returning to the court and the return of the Melbourne Vixens to Victoria for the 2021 Season.

This is the first year the Melbourne Vixens and Netball Victoria will host a home game in Victoria.

Tammy has been working as an artist for five years, starting her career with Kaiela Arts in Shepparton where she also delivers programs at Kaiela Arts including for youth, women, and children.

Linework is the traditional form of artwork for Tammy, which makes up her dress design, she also works with types of art through projection, painting, ceramic, sandpainting and weaving.

“My art has been connecting with both Aboriginal and non-aboriginal communities and I love the fact that I have been able to design the dress for the Melbourne Vixens, to me it has been an honour. My mum always supported me and told me since I started my art that it should go on a netball dress. She has always pushed me to believe my art needs to be on a dress”.

After that meeting I came up with the designs, paintings.

So when I found out, I rang her up and I said ‘hey, what’s one thing you wanted my art to go on?”.

And she was very excited and said, ‘I knew it, I told you”.

It’s one of those things that she believed my art should go on a dress. She always said it for ages, I

“To have indigenous round for sport in general is amazing and is a great opportunity to highlight Indigenous people. Its amazing for netballers in Victoria to see and connect with the dress and highlight culture.

The design:
The design illustrated by Tammy encompasses a return to netball at community level and the Melbourne Vixens returning to netball in Victoria after their season in the hub in Queensland. Tammy’s family connections are also a strongly depicted and represented throughout her design.

The painting represents the four values of the Melbourne Vixens.

There are 12 women around each value, showing the Melbourne Vixens team and coaches.

The waterways are connecting, lake, river or ocean depending on where you are in Victoria, which is the connection of family, sport, connection of coming together.

The bottom linework represents the land we are on.

Returning to netball and coming together again in Victoria, this design is about that. It is also about indigenous communities coming back to netball after the pandemic, all about netball is a big part of our community, having netball back is great.

“Having indigenous people mentally and physically coming back to netball, connection to sport”.

Meaning behind the 2021 Dress (Designed by Krystal Dallinger):

The story behind this year’s dress took inspiration from the 2021 NAIDOC theme “Heal Country”.

The symbol at the bottom represents our elders whose knowledge of the land, or animals and our traditional practices (which represented by the animal tracks and symbols) is passed down through generations to educate our countries future leaders and to keep our culture alive.

The boomerang and the spears represent the wars and fighting for acknowledgement, inclusiveness and recognition.

The darker symbol in the middle represents the connections we have with the land and the community around us in hope to revive our culture that has been lost over the years, connecting with that is the symbol above which symbolise coming back to roots so searching for the acknowledgement that has been lost then gaining the cultural identity.

The symbol on the side represents all the journeys that have been/ will be taken for us as a country to heal and regain that knowledge of the land that we live on, we all start in the same boat and every one will have a different journey in which we will take.

The turtles are a throwback for the first year l had the honour of designing the Giants dress representing my journey that l have taken. 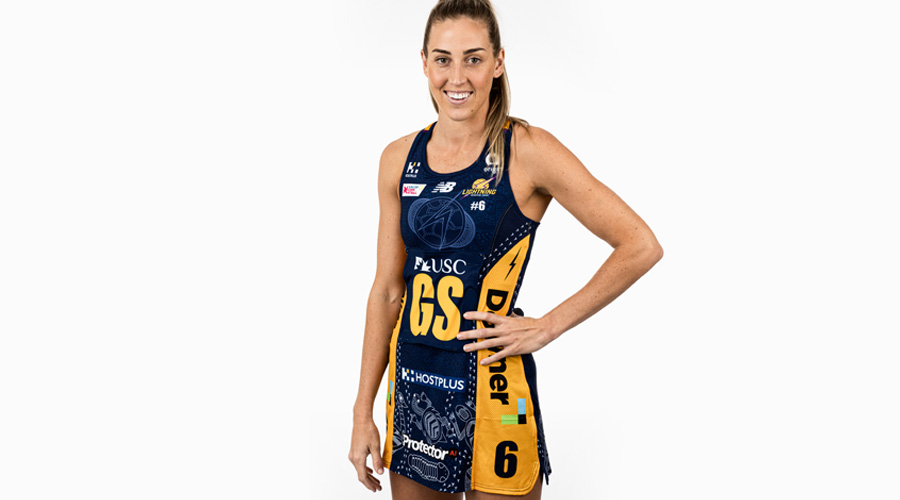 The dreaming always was, and will always be a continuum of a state of being. Within the dreaming is the spiritual essence, where spirit beings share the same Psyche with humans and the environment.

Kabi-Kabi people of the the Sunshine Coast ask all those that share our country to take pride in caring for all people and to  be mindful that you also have a responsibility, as Australians to care for this country and its people. I have provided for you through my art a representation of our Kabi-Kabi Dreaming. The Saltwater Dreaming and the Dreaming of the Lands throughout the Sunshine Coast.

Our Dreaming includes respect for all within our environment. The continuation of our lives requires us to have a responsibility not just to the land, not just to the stories of the land, but for all living things. Therefore I’ve chosen the longneck freshwater turtle, Maroochy (swan), the goanna, and witchery grub, on all the lands of the Sunshine Coast.

All Kabi-Kabi people have connections and respect of animals which interconnect stories with their human counterparts. Such totemic relationships contribute to the preservation and spirituality of this land and every living thing, it is important for all people to understand.

Lightning is a force of nature to be respected. Our Sunshine Coast Lightning Team is named after the lightning of our skies. As such that same description of respect can also be applied to our Lightning team by their opponents who can be struck down in the force of defence and attack by our Sunshine Coast netball team.

Our Lightning team are also surrounded by a shield of sustainability that protects within any environment. 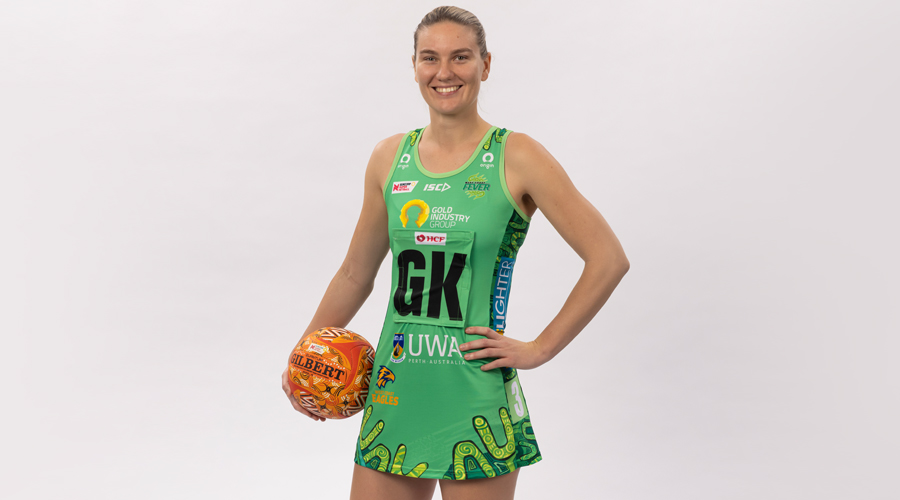 The dress has been designed by Noongar artists, Peter Farmer and Kylie Graham and features seven circular symbols representing the seven players on court gathering or coming together and the unpredictable path water weaves throughout the landscape.

There are also 90-degree angles that symbolise the sections of the netball court and the sometimes-sharp turns that life takes each individual on in their journey, while there are symbols of Aboriginal culture that represent the female.