The 2020 Suncorp Super Netball league season will see the addition of the two-goal Super Shot, an exciting new addition to the shooting circle.

The Suncorp Super Netball league continues to evolve the game of netball announcing the introduction of the two-goal ‘Super Shot’ in this year’s season, commencing on 1 August.

The decision follows several years of debate and joins rolling substitutions and extra time as new features of the 2020 season.

The Super Shot will provide goal attacks and goal shooters the opportunity to score two goals by shooting from a 1.9m designated zone within the goal circle and will be active in the final five minutes of each quarter, providing a blend of the traditional game with the new.

Suncorp Super Netball CEO Chris Symington said the Super Shot will add an element of thrill to the matches.

“Our statistical analysis of the first three seasons found that close to 90% of goals scored during Suncorp Super Netball matches were within three metres of the goal post. We know that the long shot is statistically more challenging, but the game has always been predicated on the ability for our shooters to score from anywhere in the circle,” he said.

“We want to encourage this spectacular element of our game and, when combined with the introduction of rolling substitutions this year, we believe the Super Shot will spark new tactics, further showcase the world-class skills of our athletes and add another level of hype and excitement to our matches.

“With the ever-growing competition for the attention of fans, the time is right to introduce an innovation that will make the game even more dynamic and unpredictable.” 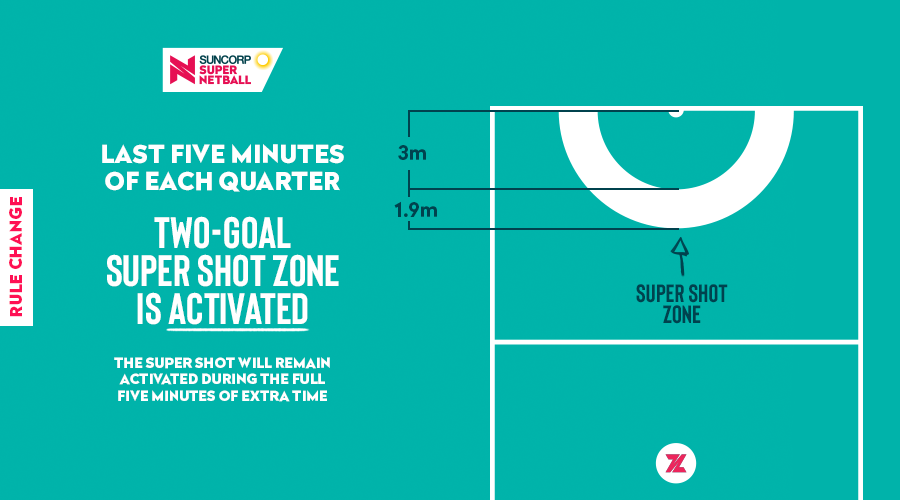 Since its inception, the SSN has actively embraced innovation within the game, adding the bonus point system, a rule which, last year, took the determination of the top four-placed teams down to the final seconds of the home and away season.

The Super Shot is one of three new rules being introduced for the 2020 season, joining a new extra time rule and rolling substitutions.

If scores are tied at the end of the match, teams will play five minutes of extra time and the Super Shot will be active for this entire five minutes.

Rolling substitutions, which allows teams to make as many substitutions as they like without stopping the match, should also see an added level of team tactics and more games where the entire bench gets court time.

The 2020 season begins on Saturday 1 August with the fixture to be confirmed in the coming weeks.

The Super Shot will apply to the Suncorp Super Netball competition only and will not be introduced at any other level of the game.