Caitlin Thwaites could be forgiven for wondering. Was it just a coincidence?

The raw numbers, after all, told an unflattering tale. In the first six Suncorp Super Netball games between fierce Melbourne rivals the Vixens and Magpies, only one player - yes, Thwaites - had been on the losing side all six times.

“I was starting to question whether it was me, to be the common denominator in the losing battles,’’ the Vixens shooter joked in the aftermath of a fine recovery effort by both player and team in Sunday’s 13-goal minor semi-final win.

“It was really pleasing. We obviously have got our minds firmly focused on finals and wanting to get out there and do the job for our club and for our team, and then there’s those extra added layers that bring more to it - whether that’s extra motivation against your old club or things like that - than it just being a game.

“We’ve also got one of my other old clubs this weekend, so there’s storylines everywhere for you guys as journalists to be able to dig out!’’

That would be the NSW Swifts, where Thwaites spent three happy seasons from 2014-16 before her move to Collingwood for SSN’s debut year. One of the shocks of the last contracting period came when no new deal was forthcoming despite Thwaites’ consecutive top-two finishes in the Magpies’ best-and-fairest.

Her homelessness was temporary, though, for the Vixens were in need of a replacement for ACL victim Mwai Kumwenda, and quick to entice their foundation player and 2009 premiership team member back to the fold.

She has averaged 31 goals at 91 per cent accuracy in partnership with Tegan Philip, and the fact that both scored 28 to share the load equally last Sunday against a Pies’ defence that had been so suffocating just a week earlier represented a welcome form spike for both.

“I thought ‘Teegs’ and Caity both had a great game on the weekend,’’ said Vixens captain Kate Moloney, praising the pair’s shooting as well as the more dynamic movement that allowed them to divide and conquer April Brandley and Geva Mentor. 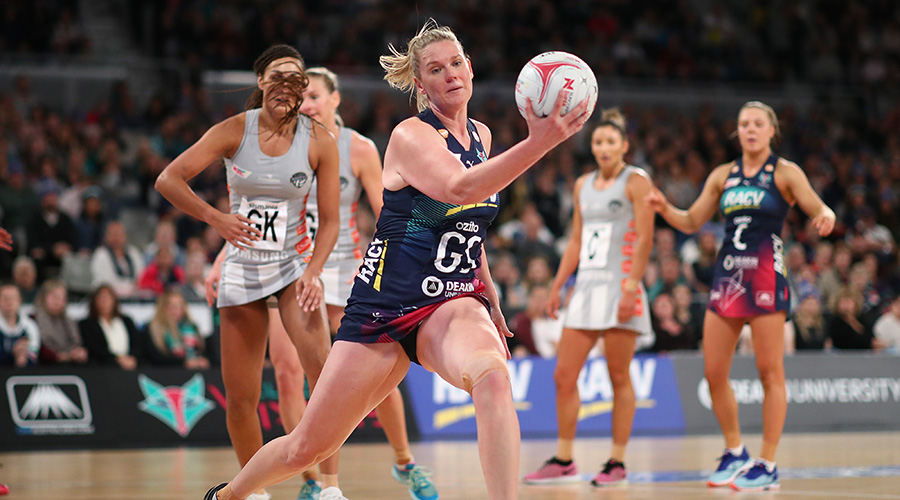 “We hadn’t beaten them this year and for Caity she hadn’t beaten her old side yet in a proper game. We never like losing to the Magpies, and it was a good time to get the win for us and I suppose for Caity, as well.’’

Not all reunions work as well as this one, yet Thwaites believes the fact that not everything has gone seamlessly in a year in which she also represented the Diamonds at her second World Cup may ultimately work to the benefit of a Vixens side that dropped its last three pre-finals rounds - including a Round 12 loss to the Swifts in which a struggling Thwaites was benched for Kumwenda just before half-time.

“We’ve definitely had our ups and downs and it’s not been all smooth sailing for us, but I think the fact that we’ve had to figure things out through the season has actually put us in good stead,’’ Thwaites said. “We’ve taken a lot of learning and a lot of growth out of those games, which is really good.’’

Learning and growth have long been personal themes, too. The 32-year-old has been commendably open about her struggles with depression and - more recently - the impact of her axing by the Magpies, having represented four clubs since graduating from the Melbourne Kestrels to join the newly-formed Vixens for the inaugural ANZ Championship.

“The 2008 Caity was probably happily naive!’’ she smiled, when asked to compare herself then with now. “I think there’s a certain amount of confidence that comes with youth and just feeling like you can take on the world.

“But then, today, on the flip side, there’s a certain amount of confidence that comes with the experience and the knowledge that I’ve gained across those years as well.

“So there’s definitely been so much growth that’s happened for me across my 17 seasons of netball … and having different experiences just adds to the level of knowledge and information that you can bring to any given situation.’’

Sunday’s is a big one: a preliminary final at Qudos Bank Arena against another of the well-travelled veteran’s former teams, and Thwaites finished on the losing side against the Swifts during both the home-and away rounds, just as she did against the Magpies.

Which could just be a coincidence, although a certain 215-gamer prefers to look at it as a hint of what's to come.