Following the retirement of Renae Ingles, the Melbourne Vixens have announced the signing of defender Kate Eddy.

The Melbourne Vixens have announced that Victorian defender Kate Eddy is their first new signing of the 2019 trade period as they look ahead to the 2020 Suncorp Super Netball season.

The 22-year-old returns home to Melbourne after working with the Vixens as a Training Partner during the inaugural SSN in 2017, before moving north after earning a contract with the NSW Swifts for the past two seasons.

“I’m excited to come back and play next year among some of the girls who have been through the [Victorian] pathway with me,” Eddy reiterated.

“I have a lot of respect for Simone as a coach as well, so I think as a player who plays wing defence I’m going to learn a lot from that. 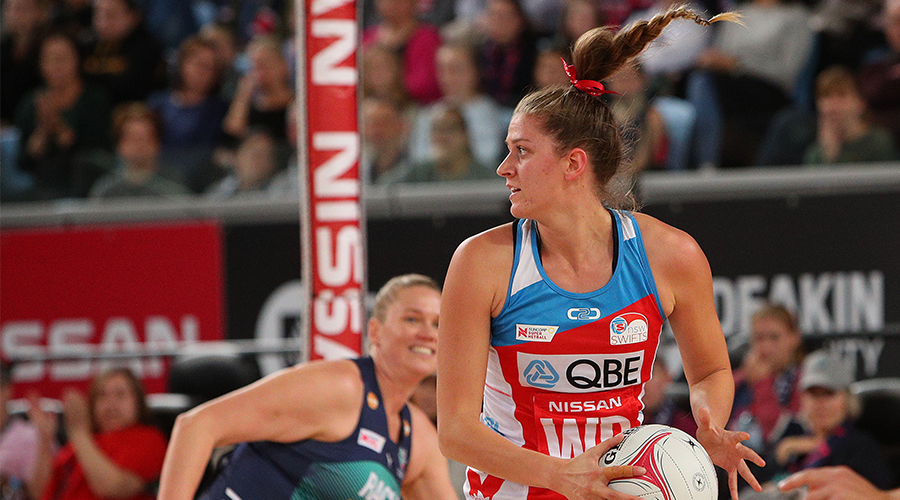 Eddy played all 14 games for the Swifts in 2018, and in 2019 was an integral member of the NSW Swifts’ premiership-winning squad, before a mid-season ankle injury ended her hopes of taking to the court in the Grand Final.

“I tried really hard to get back for the Grand Final and it didn’t really work too well…I think ramping it up kind of set me back a little bit, but at the moment I’m going well, seeing physios, and I should be fit and ready for pre-season.”

Eddy explained that her injury in Sydney reiterated to her the importance of life outside of netball, which as well as being closer to family and friends, was a factor in her decision to come home.

“When I hurt myself it was a big wakeup call for me.  I was very netball-involved in Sydney…it was like I was in like a big bubble and so hurting myself made me realise that I didn’t really have a lot of other things outside of netball.”

Eddy returns to the Vixens from the Swifts with a wealth of both on- and off-court experience.

“I learnt a lot,” she said of her time in Sydney.  “I think for me the biggest thing [I learnt] was the importance of culture and being friends with people on court…at the end of the day that’s why you want to win; you want to win with your friends and your family.

No stranger to the Vixens environment, Eddy was a Training Partner with the Melbourne Vixens in 2017, before being contracted by the NSW Swifts for the 2018 and 2019 seasons of Suncorp Super Netball.