The Sunshine Coast Lightning have claimed a dominant 65 to 57 victory over the West Coast Fever to take themselves into the Suncorp Super Netball season hiatus with seven wins and only two losses.

When the Lightning and Fever met earlier this season in Round 2, Lightning scored 80 goals to Fever’s 55, and broke the record for the most goals scored in a match, so the Fever were out for redemption.

Both teams came out firing with some clean netball and play went goal-for-goal for much of the first quarter. 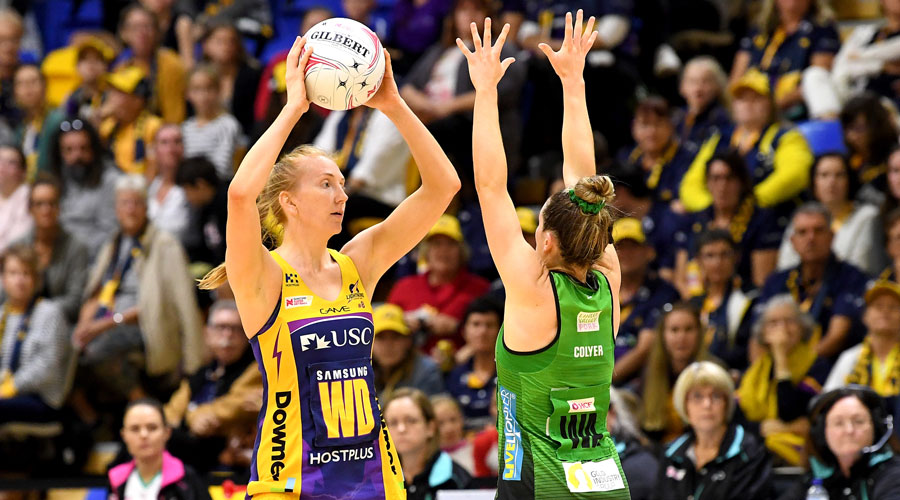 The fight for the first bonus point went right down to the wire but it was the Lightning that were able to break away, thanks to a late Steph Wood goal, and take a one-goal lead into the first break, 17 to 16.

Teams remained unchanged after quarter time and so did the flow of the game. It was a completely even split of ball possession and the score reflected this with the goal-for-goal match play continuing.

Late in the second quarter is was again the Lightning that took the lead, forcing a change to the Fever team with Stacey Francis coming on in goal defence for Shannon Eagland.

Nissan Player of the Match Lightning wing attack Laura Scherian worked overtime with her quick movement right throughout her team’s attack end and some pinpoint passing into goal shooter Peace Proscovia, who shot 44 from 45 (96%) for the match.

It again went down to the final seconds to determine the winner of the second bonus point, with the Lightning snatching it from the Fever to go into half-time with a 33 to 31 lead.

Lightning’s Pretorius quickly set the tone of the third quarter, taking a huge intercept within the first three seconds of play, kickstarting her team to a seven-goal lead half-way through the third.

A frazzled Fever again made changes with Alice Teague-Neeld coming on into goal attack for Kaylia Stanton, but it wasn’t enough, and the Lightning went into the final break with a nine-goal lead, 51 to 42.

The Fever changed the entire court structure at three-quarter time, leaving only Fowler and captain and goal keeper Courtney Bruce in their same positions.

The changes helped them change the momentum of the match, reducing the margin to five half-way through the last and claiming the final bonus point of the match. However, it wasn’t enough and the Lightning held on to clinch victory.