Sunshine Coast Lightning have kept the Collingwood Magpies to their lowest-ever score with a dominant 64 to 41 win to kick off the Suncorp Super Netball league Indigenous Round.

The two teams last met in Round 1 where the Magpies claimed a convincing 57-43 win over the Lightning and it was clear the Lightning were out for revenge from the get-go.

While both teams began the game playing some very clean netball, it was the Lightning who took an early lead half-way through the first quarter. This was in huge thanks to the smarts of goal defender Karla Pretorius who took three key first quarter intercepts, and the great finishing skills of goal shooter Peace Proscovia who shot at 11 from 13 (85%) in the first.

The Magpies made a comeback late in the quarter, but it wasn’t enough to claim the first bonus point, leaving them trailing the Lightning 15 to 13 at the first break.

Magpies’ wing defence Ash Brazill continued to bring her creativity and flair to the game, taking several intercepts throughout the first half and helping her team bring the scores to level in early in the second quarter.

Steph Wood, the Lightning goal attack, had an impressive first half, positioning herself well to benefit her attack end and finding a great balance between feeding into Proscovia and taking her own shots under the post. 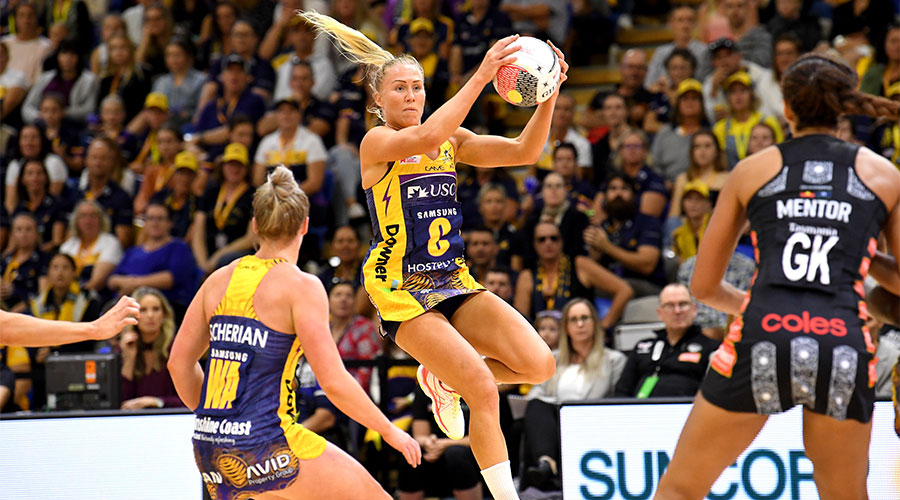 The Lightning continued to grind away, finding their attack end much easier than the Magpies and stretching their lead out to six at half-time, 31 to 25.

The intensity lifted at the beginning of the second half, but the Magpies’ lack of discipline began to cost them with their penalty count nearly doubling the Lightning’s at three quarter time, 54 to 29.

The Lightning capitalised on these opportunities handed to them and went from strength-to-strength, again stretching their lead out to 13 at the three-quarter time break and setting themselves up for strong finish, 48 to 35.

The Magpies made changes in bringing on Matilda Garrett in goal defence for April Brandley and Gabi Sinclair for Nat Medhust at goal attack.

The changes didn’t help the Magpies though and Pretorius continued her defensive dominance throughout the last.

retorius was strongly supported throughout the entire match by young wing defence Maddy McAuliffe who got her hand to many balls throughout the match.

The Magpies scored only six goals in the final quarter compared to the Lightning’s 16 to finish the match with no Suncorp Super Netball premiership points.