The Sunshine Coast Lightning have come back from nine-goals down to upset an undefeated NSW Swifts by two goals, 59 to 57, in an intense and physical match at Quaycentre in Sydney.

It was the most anticipated match of the season with the Swifts sitting undefeated in second place on the ladder and the Lightning showing dangerous form in their past two appearances.

The Lightning scored a record 80 goals in Round 2 against the West Coast Fever and the Swifts quickly levelled this record in Round 3, also against the Fever.

It was a fast and frenetic start with both teams bringing the expected intensity and physicality.

Karla Pretorius took a huge early intercept for the Lightning after celebrating her record 100th Suncorp Super Netball intercept in last week and her turnovers were capitalised on well by Laura Scherian and Laura Langman who brought the ball so cleanly out of defence down through the midcourt.

It was the Lightning who were able to take the first bonus point at quarter time, with a one goal lead over the Swifts – 17 to 16.

Both team’s goal shooters Peace Proscovia and Sam Wallace have had incredible starts to their seasons and today was no different. Both shooters were the key target under the post and both shot accurately in the first half – Wallace at 94% and Proscovia at 96%.

It went goal-for-goal throughout the second quarter – both teams showing they are real contenders within the competition. 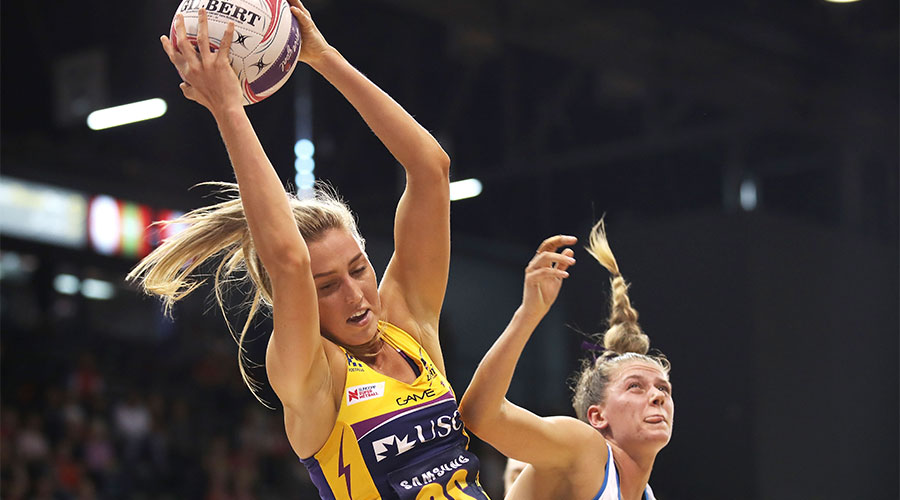 The Swifts hit the lead with five minutes to go with six consecutive goals from goal attack Helen Housby and the young Swifts defence outfit of Sarah Klau, Maddy Turner and Kate Eddy continued to apply relentless pressure to the Lightning attack end.

The Swifts evened the bonus point count at half-time, winning the second quarter and taking a one-goal lead into the main break.

The Lightning remained unchanged at the beginning of the third, but the Swifts mixed up their defence end – a move that paid dividends with the young team extending their lead out to nine.

The Swifts went on to take control of the match and the Lightning were forced to make changes up their attack end, bringing on up-and-comer Cara Koenen into goal shooter for Proscovia, looking to create more movement under the post.

Pretorius came into her element in the third and took four key intercepts, bringing the margin back to three at three quarter time, 45 to 42 with the Lightning trailing. Pretorius’ outstanding efforts earned her a Nissan Player of the Match accolade.

It was a hard-fought and physical last term, both teams were frantic and every loose ball was scrambled over.

The Lightning fought back and to bring the scores to level with five minutes to go and after a critical time-out the Lightning hit the lead and went on to control the rest of the match, claiming victory by two goals.