The Sunshine Coast Lightning have put themselves on top of the Suncorp Super Netball with a hard-fought 60 to 56 win over GIANTS Netball in Sydney.

Going into this match, neither team had lost a game since returning from the Netball World Cup and the Lightning were on a five-game winning streak, putting them just three-premiership points behind the top of the table NSW Swifts.

From the outset, both teams were playing clean transitional netball with both team’s midcourt players capitalising on some tight defence.

It went goal-for-goal for most of the first term, but it was the Lightning that were able to stretch out to four-goal lead half way through the quarter, thanks to some brilliant feeding by Laura Langman and Laura Scherian.

Lightning young gun Cara Koenen got the nod to start in goal shooter and rose to the challenge, moving well in the circle with goal attack Steph Wood and shooting 9/9 in the first alongside Wood who was also at 100% for the term.

The GIANTS had a late run of momentum and scored the final three goals of the term. They nearly evened the quarter but goal shooter Caitlin Bassett missed a goal in the dying seconds and the whistle sounded to see the Lightning win the first bonus point with a 16-15 lead.

The GIANTS continued their momentum as the second quarter began and steamrolled the Lightning, getting out to a three-goal lead within five minutes of play. Lightning coach Noeline Taurua called a time out to break this momentum, but it couldn’t stop the GIANTS who continued their dominant form right throughout the second.

With the Lightning down by four with five minutes to go in the second, Taurua made two changes, bringing Peace Proscovia on for Koenen to play alongside eventual Nissan Player of the Match Steph Wood, and Maddy McAuliffe on for Jacqui Russell in wing defence.

The change had an immediate impact with Proscovia shooting three goals in a row and bringing the margin back to one. It wasn’t enough to get the lead back however and the GIANTS claimed the second quarter bonus point and took a one-goal lead into the main break (32-31). 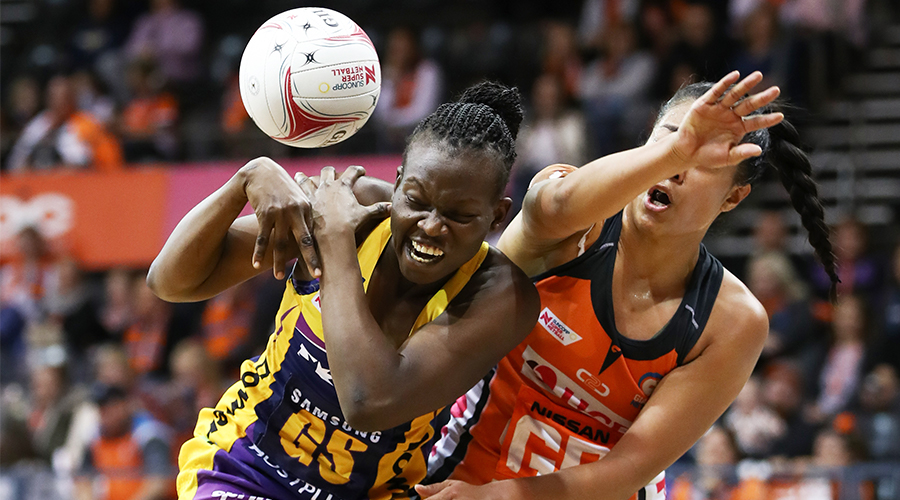 The Lightning came out firing at the beginning of the third and took back to the lead immediately, scoring six goals to the GIANTS’ three in the first five minutes.

GIANTS coach Julie Fitzgerald called a time-out to hold up the Lightning and moved veteran Kim Green into centre for Jamie-Lee Price and brought Kiera Austin onto the court in wing attack for Green for some added height in attack.

The intensity lifted right across the court late in the third, but the Lightning remained steady, taking back the lead at three quarter time and setting themselves up for the last with a five-goal lead.

The GIANTS made more significant changes at the break, bringing Austin into goal attack for Jo Harten and moving Price and Green back to their original positions.

The GIANTS fought boldly in the last, so much so they claimed the final bonus point with a 14 goal to 13 quarter, but it wasn’t enough to get the lead back from the Lightning and the reigning premiers claimed a four-goal victory and have set themselves up very well going into the final two home and away matches.