It’s the Sunshine Coast Lightning who have claimed victory in the first-ever Suncorp Super Netball match held in Darwin, defeating the Adelaide Thunderbirds in a thrilling match, 59 to 53.

The Lightning were strong favourites to take this match but struggled to get any flow happening early in the first, however, towards the first break things began to click and the Lightning fought back to go into quarter time trailing the Thunderbirds by only one goal, 15 to 14.

Young Lightning shooter Cara Koenen had her second ever start for the club, replacing usual starting goal shooter Peace Proscovia. Koenen showed why she’s one of the league’s most up-and-coming athletes, shooting 20 from 21 (95%) in the first.

It was quite an even second quarter, but Lightning continued to grind away and hit the lead half way through the term.
Thunderbirds goal keeper Shamera Sterling continued her stellar season form, taking five strong first half intercepts and making it very difficult for the Lightning midcourters to feed cleanly into the circle. 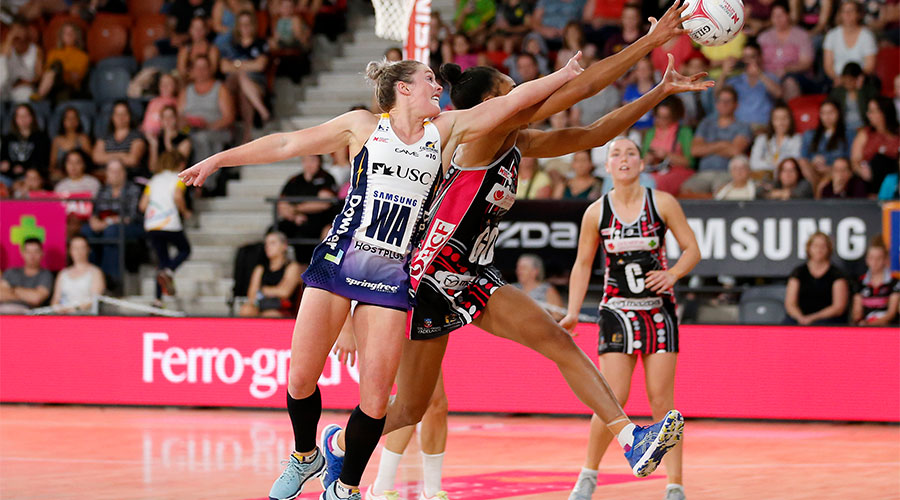 The Lightning found their standard smooth end-to-end transitions towards the main break and went on the claim their first bonus point for the game, taking a four-goal lead into half time, 29 to 25.

It then went goal-for-goal for much of the third quarter with the Lightning maintaining their slight lead.

Thunderbirds’ goal attack Folau showed why she’s one of the world’s best late in the third, sinking her signature long shots, shooting five straight goals for Adelaide and leading them into the final quarter with another bonus point and one-goal lead, 43 to 42.

The Lightning made a huge move in the final quarter bringing on Proscovia in goal shooter for Koenen who went to the bench with 30 goals from 32 attempts.

The change paid dividends with the Lightning taking the lead early in the final term and took control of the match thanks to the never-ending engine of centre Laura Langman who was everywhere for the Lightning, earning herself yet another Nissan Player of the Match nod.

The Lightning maintained their control throughout the last and extended their out to six at the final siren.