The Sunshine Coast Lightning have fought back from eight goals down to claim a last second victory over the Melbourne Vixens and put themselves on top of the Suncorp Super Netball ladder.

Both teams came out firing, playing clean netball and transitioning down the court well with very few errors.

It was the Vixens who were able to break away half-way through the first quarter and take a five-goal lead forcing the Lightning coach Noeline Taurua to call a time-out to break the Vixens’ momentum.

The break did little to help the Lightning though and Taurua was forced to make a change late in the quarter, bringing on Peace Proscovia into goal shooter for Cara Koenen and Koenen moving into goal attack for Steph Wood.

The Vixens defensive end in Emily Mannix, Jo Weston and Renae Ingles played extremely tightly throughout the first, the midcourters transitioned well and Caitlin Thwaites and Tegan Philip only missed one goal for the term.

Their first quarter dominance saw them claim the first bonus point and take a six-goal lead (17 to 11) into the first break.

Within minutes of the second quarter the Lightning penalty count had reached 18 compared to the Vixens eight and the Vixens quickly capitalised, stretching their lead out to eight goals.

The battle between the two team captains in centre, Lightning’s Laura Langman and Vixens’ Kate Moloney, was a sight to behold but it was Moloney who was having more impact at half-time with 22 feeds into her goal circle, compared to Langman’s 13.

The Lightning managed to settle late in the second quarter and with a last second goal from Proscovia, the Lightning manage to even the score for the quarter, 14 goals apiece. The Vixens held their six-goal lead at the main break.

The Lightning again changed up their goal circle at half time, bringing Wood back on for Koenen in goal attack for the extra drive and agility that Wood is so known for.

The Vixens kept up their tight defensive pressure and took the lead out to eight early in the third, but the Lightning responded well and reined the margin back into four goals half way through the third.

The Lightning then managed to keep control of play right throughout the quarter and claimed their first bonus point of the match, winning the quarter by two goals and only trailing the Vixens by four goals at the last break. 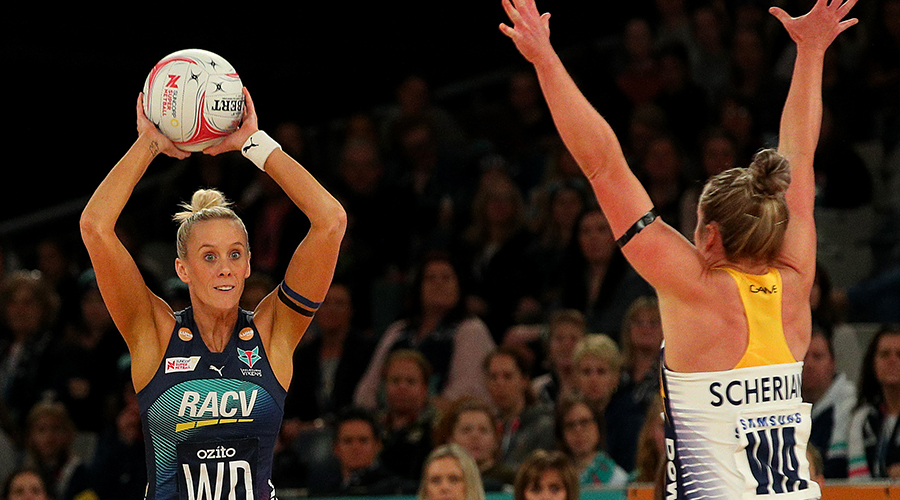 Vixens’ coach Simone McKinnis made a key change for the final term, bringing on Mwai Kumwenda in goal shooter for Caitlin Thwaites.

The change didn’t have the intended immediate impact with both Phumza Maweni and Karla Pretorius taking intercepts ahead of Kumwenda within the first few minutes. The Lightning scored on these intercepts, as well as their two centre passes, and they brought the scores back to level within three minutes.

From here, it was a battle to hit the lead at he final whistle and it was the Lightning who managed to do so with Wood scoring a last second penalty shot to win the game by one goal.

For her incredible performance in wing attack for the Vixens, Liz Watson was named the Nissan Player of the Match, chalking a huge 45 feeds into the circle and 30 goal assists.