in Finals
Share
Link copied
Brought to you by

A Grand Final replay – both GIANTS Netball and Sunshine Coast Lightning have experienced the brutality of a Suncorp Super Netball Finals Series before.

The two clubs made it all the way to the Grand Final, hosted by Lightning in a game that was set to mark history – with the winner not only having the glory of being the national champions, but also going down in history as the first team to lift the Suncorp Super Netball winner’s trophy.

The two encouters by these teams leading up to that game were tight, with little between them, but for whatever reason in the grand final the GIANTS folded and Lightning stormed to a huge 65 to 48 win.

LAST TIME THEY MET THIS SEASON

A one-sided start, a dogged comeback, a goal-for-goal final-quarter arm wrestle, a major error of judgment and a goal on the final whistle made for one of the most thrilling games of the season, with the teams fighting out a 53-53 draw in their last encounter.

WHERE IT’LL BE WON

How do you split two teams who could barely be split during the regular season?

With stars at every position, GIANTS Netball and the Sunshine Coast Lightning are about as evenly matched as two teams could possibly be, and their results this season – a three-goal Giants victory and a 53-53 draw – bear that out.

While it might seem counterintuitive to suggest the result will hinge on whether one team can keep the other’s defensive unit quiet, that’s the task in front of the Giants attacking quartet.

Can they curb the influence of Lightning goal keeper Geva Mentor and goal defence Karla Pretorius? 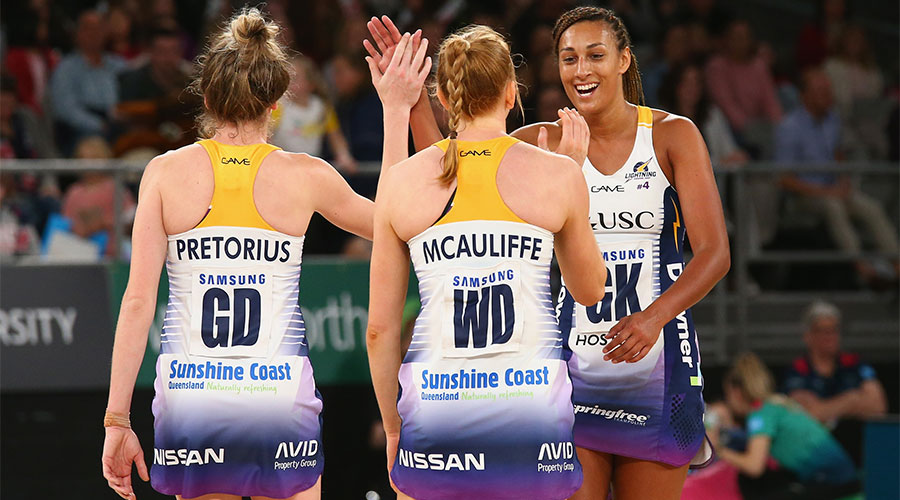 When the teams met in Round 1, Mentor managed just two defensive gains, while Pretorius had four in the three-goal loss. In Round 8, however, the pair had a combined 11 gains against the Giants, including seven across the second and third quarters as they hauled their team back from eight goals down and into the lead.

The mobile pairing of Jo Harten and Susan Pettitt presents a very different assignment to what the Lightning face against the likes of Jhaniele Fowler and Romelda Aiken, and if the Giants can use that movement to keep the ball out of the air and limit the opportunities for Mentor and Pretorius to do what they do best, it’ll go a long way to determining the result.

It’s a hard ask to maintain that level of discipline for four quarters, but under Suncorp Super Netball finals pressure, that’s what it’s going to take.