For as long as she can remember, Peace Proscovia has shared with others.

Much of her netball earnings from the Sunshine Coast Lightning, and as an ambassador for the World Cup and product supplier Gilbert, have been divvied up and sent home to her family in Uganda.

She gives of herself as a trailblazer and role model to young girls and women in the East African nation.

No one would begrudge the inspirational goal shooter a reward she can keep should the Lightning hold off either the NSW Swifts or Melbourne Vixens when the minor premier hosts the Suncorp Super Netball grand final in Brisbane on September 15.

“It will be a dream. I always wanted to win a grand final in the Superleague but I didn’t make it,” Proscovia said. 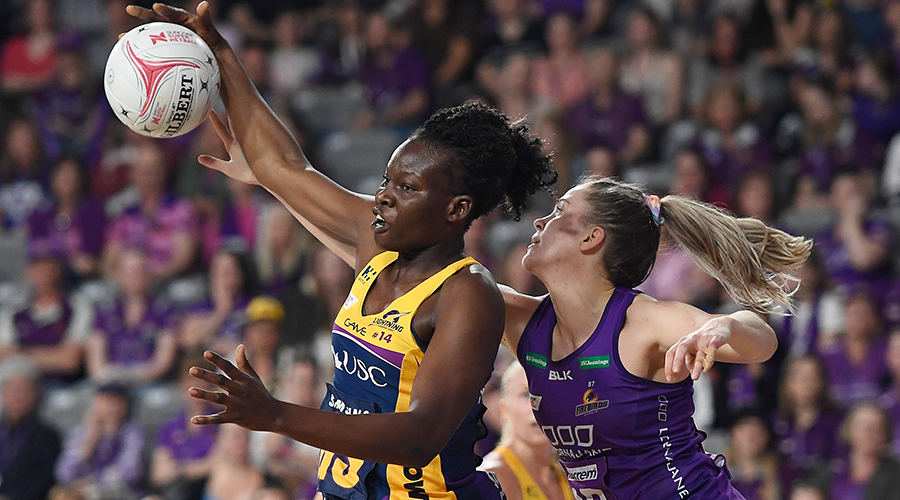 “Winning it with Sunshine Coast would make my dream come true.”

Proscovia’s story differs from that of her teammates, and not just because of a childhood spent digging her way out of disadvantage.

While captain Laura Langman has won titles at almost every turn, the first Ugandan to play professionally in the UK missed out in her two English Superleague grand finals.

She was a key member of the Loughborough Lightning outfit who fell to the Tamsin Greenway-led Wasps by the same narrow scoreline (55-51) in the 2017 and 2018 premiership deciders.

After seeking an opportunity in Australia’s national league, Proscovia can in her first season take the edge off her hunger for a title.

The key, according to Proscovia is to avoid being a stationary target. Repeating what worked last week will not be enough.

“I learnt lots of lessons from that experience,” the 29-year-old said.

“When it comes to finals the most effective team and creative team takes it all. As players we have to be very creative.”

Proscovia has shared the goal shooter bib this season with rising star Cara Koenen, and in recent games has spent much of her time as a substitute.

Rather than worry over the minutes she doesn’t get, the two-time World Cup representative cherishes the responsibilities she is given.

“It’s normally hard for coaches to substitute but Noeline (Taurua) trusts me to make a difference,” Proscovia said.

Whatever the outcome on September 15, the goal shooter’s outlook will undoubtedly remain positive.

“I’m a strong person from life experience,” she said.

“I’ve learnt that you have to be strong and sometimes things don’t come your own way.

“When life hits you hard you have to hit it harder.”