Ash Brazill sees her spectacular late-season role switch as extending beyond the obvious positional move from wing defence to centre.

As the Magpies stormed into Sunday’s Suncorp Super Netball minor semi-final against the Melbourne Vixens, the Nissan MVP for the third successive week earned the three votes as lead celebrator, too.

“I feel like my role with the club at the moment is just to be excited - (be) more the motivation kind of player than what I’m actually doing on court,’’ says the 29-year-old midcourter/exhuberance officer.

“I’m just loving netball at the moment and how I celebrated after the game, that just happened. I was so excited and felt like a little kid again, so I’m just trying to make that feeling more contagious.

“I’ve never felt like that (before). I was saying to the girls at training that that was by far the best game I’ve ever been a part of, and not just because we won, but because of the circumstances.’’

Famously, that meant three bonus points plus sufficient winning margin against their fierce Melbourne rivals that enabled the Pies to dislodge the Giants from fourth spot by just 0.62%. Brazill’s six-months-pregnant wife Brooke was among the many exhausted spectators for whom each quarter was a game in itself. 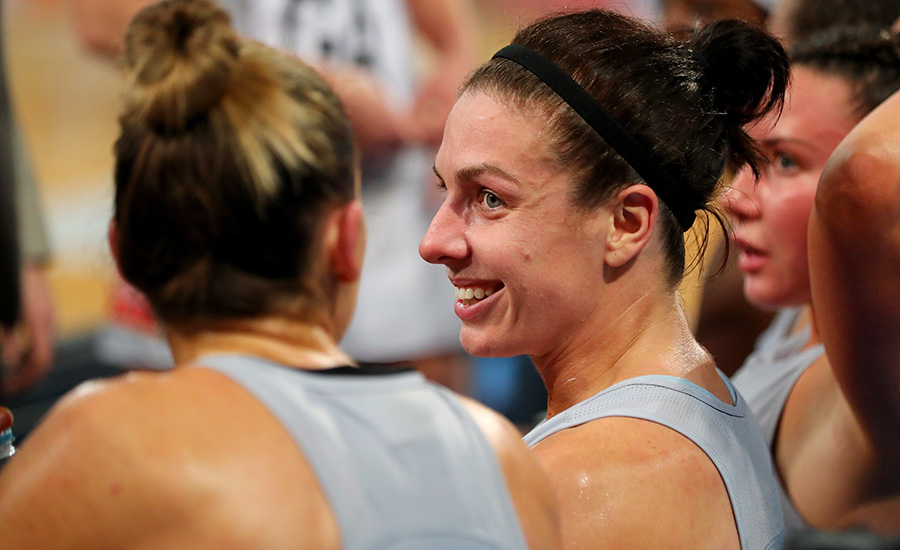 It was a truly special day, with Brazill admitting she is not just a player but sometimes a “fan-girl” who is still thrilled just to be out there. The recipient of the bench signals about how many goals were required in those final minutes, Brazill suspects she was the first on-court to realise what had just been achieved.

Finals. After a huge task against the Vixens.

“When that siren went I don’t think anyone realised that we were in except for me,’’ she says. “I ran up to Shimona (Nelson), she picked me up and something kind of came over me, I was just in shock," Brazill explains.

"If you’d asked me before the game ‘is this doable?’ I would have definitely said yes, but there was a part of me that was like ‘I don’t know if this can happen’.

"It was a such a big game and the Vixens are such a strong side that ...  to beat them every single quarter, was another challenge in itself. It was like the emotion kind of took over with everyone. It was a really cool feeling.’’

So, can we now consider Brazill a convert to SSN’s bonus points system? "Oh, definitely - because we’re in finals," she says, laughing. “If we weren’t, I would have probably said no."

Yet Brazill is more reluctant to describe herself as a centre, having spent most of the past six years on the wing. In typically self-deprecating fashion she deflects a compliment about her trio of MVP awards - “I think people have been feeling sorry for me. I said it was my first one and they just kept coming!” - but is also embracing the unexpected bib trade with Kim Ravaillion.

“Moving 'Brazzie' into the middle has given us that extra drive and power into attack," says Richardson, the first-year Magpies assistant who shares with Upton a 3-0 record in the temporary senior post. “She’s been awesome. It’s like she’s found a new lease on life, she’s actually relishing the role, and I think it’s really opened upon our attack end for us.’’

Collingwood’s remarkable AFLW All Australian says the constant running means she feels more like a footballer when she plays in the pivot. Yet, when asked if that cross-code endurance has helped, Brazill also jokes that she sees it as a Magpie plot to ensure she’s at peak fitness to continue her footy career in 2020.

In her original sport, the four-Test Diamond hopes she has silenced some of the critics who have described her as a one-position player, while also pointing out that she has only ever played where the coach has selected her.

Like her teammates, Brazill has recently been playing for Rob Wright, who has missed the past three weeks due to the terminal illness that claimed his mother Jeanette. the funeral service was in Sydney on Wednesday.

“Rob’s the heart of our side, and I still think that’s probably why we’re playing better, because to see what he’s been like in this tough time, it hurts you, and for us we’ve now got more to play for, because that’s keeping someone’s spirits up.’’

Which is fitting, for elevation is Brazill’s great specialty, and the super-athlete who flies higher than most also found herself hoisted skywards by goal shooter Nelson following the most thrilling game of her life.

A celebration to remember followed a game, Brazill's 104th, that she will never forget.