The remaining fixture for the 2021 season has been released and Queensland will be the new home of Super Netball.

What an unpredictable season we have had so far this year, and why should the race for top four be any different? With a condensed season in play and a competition that is anyone’s to win, Netball fans are certainly in for an exciting month.

Round 12 will see four games played over today and tomorrow, with each match having big ramifications on the ladder. The top four teams are playing the bottom four teams this weekend, so don’t be surprised to see a few blowouts. But, if this season is anything to go by, expect the unexpected.

Here is all you need to know for Round 12.

Round 12 will kick off this afternoon with the Magpies and Swifts going head-to-head at Nissan Arena. These teams have played each other a total of nine times in Super Netball history, with the Swifts winning five of these (including one draw).

The Swifts have won four of their past five encounters against the Magpies by an average winning margin of 10-points, and they will be coming into this game as heavy favourites to make it five from six.

In Round 11, the Swifts lost a narrow one against their state rivals in the GIANTS, a loss that cost them the top spot on the ladder. A win last week would have seen the Swifts go two games clear of the GIANTS and a game and percentage clear of the Lightning. Now, all three teams are sitting in equal first position with the minor premiership up for grabs.

A much needed win was achieved by the Magpies, defeating their own state rivals in the Vixens by 4-points. Mathematically, the Magpies are still a chance to make the finals but they will need to be almost perfect from here on in, including upsetting the Swifts this afternoon.

When these teams clashed back in Round 5, it was the Swifts who took home the win with a 9-point victory at home. The Magpies were only trailing by 1-point at three-quarter time, but the Swifts put the foot down, scoring 17-points to 9 in the last quarter.

Sam Wallace was the difference in the end, scoring 16 last quarter goals, including a stretch of six unanswered that single-handedly snatched victory away from the Magpies.

Ash Brazill was the best for the Magpies, ending the game with a team high 74.5 Nissan Net Points. Brazill has played the equal highest minutes this season with 663 (tied with Karla Pretorius) and with a condensed fixture on the cards that will see teams playing games in shorter turnarounds, Brazill will be required to dig deep to help push her team to victory.

The Magpies defence will need to be at its absolute best this afternoon, as the Swifts are currently ranked first in shooting accuracy this season (90.2%). Jodi-Ann Ward and Geva Mentor were both outstanding in defence against the Vixens last round, but they will need to rise to another level if they want to restrict the impact of Wallace, Helen Housby and Garbin.

The Magpies are currently league leaders in deflections resulting in a gain, so this will be a key factor to their chances of winning.

The top spot could come down to percentage at season's end, so the Swifts will be hunting a big win to boost their percentage above the GIANTS. 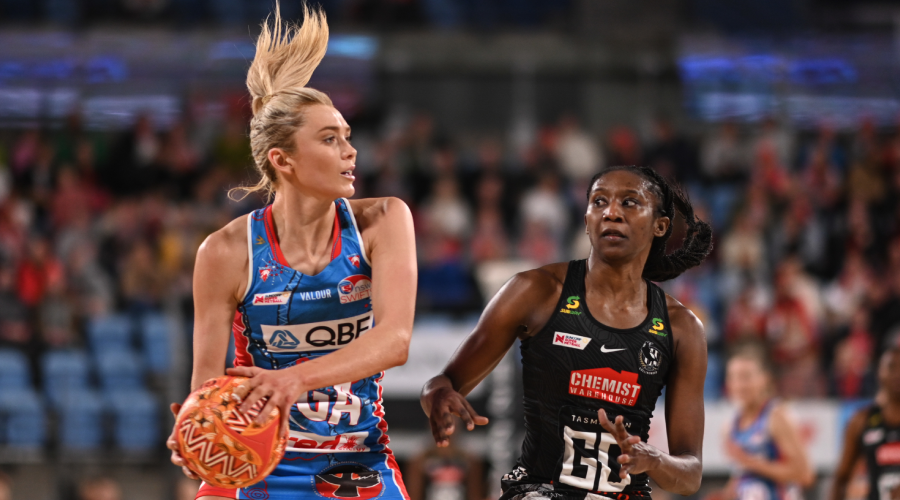 The second match today will see the Fever and Firebirds do battle at Nissan Arena at 6:30pm. This is the game of the round in my eyes, with these two teams currently battling it out for fourth spot on the ladder. The Fever are a game ahead in wins and currently have a greater percentage to the tune of 15%. If the Firebirds can steal victory tonight, then the race for top four will be blown wide open.

Despite the Fever looking like the team to beat in 2021, the Firebirds have been handed the biggest advantage of the year, with all remaining games to be played in their home state of Queensland. However, the Firebirds have only managed to win 40% of their games at home this season, including a 10-point loss to the Fever back in Round 7. And on the contrary, the Fever have only lost one away game this year and that was by 1-point to the Swifts in Round 9.

Despite all of this, the Firebirds will still have the mental edge over their opponents for the remainder of this condensed season, knowing they will get to play every game at home. If the Firebirds were ever going to pull off a miracle to claim fourth spot, this would be their best chance.

The only problem is that they will have to face arguably the best team in the competition first off the bat. After losing their only two games of the season in narrow defeats in Round's 9 and 10, the Fever are back on track with two massive wins leading into tonight’s game. The Fever have won by an absurd average margin of 19.5 points in their last two encounters, which would explain why their percentage is 10 greater than the next best (GIANTS).

The Firebirds will need to tighten their defence substantially as the Fever are ranked number one in total points this season (749). The Firebirds have also allowed the second highest points against (670) this year. Restricting the Fever’s scoring will be a tough task for the home team, especially given the news that star GK Tara Hinchliffe has been ruled out for the remainder of 2021 with an ACL injury. Before her injury, Hinchliffe was ranked fourth in the competition for Interceptions. This absence will leave a huge hole in the Firebirds’ defence, but if last week was anything to go by, they can still win without her.

Rudi Ellis took the starting GK bib and held her own in her team’s 10-point upset win over the Lightning last week. The Lightning did suffer multiple injuries to Steph Wood and Laura Scherian during the game, but the Firebirds will still take confidence knowing they can match it with the best.

A huge congratulations to Stacey Marinkovich who will coach her 100th game as Fever coach this evening. Stacey has been an icon for Australian Netball and will be departing the Fever at season's end to coach the Origin Australian Diamonds. Congratulations Stacey on an amazing achievement! 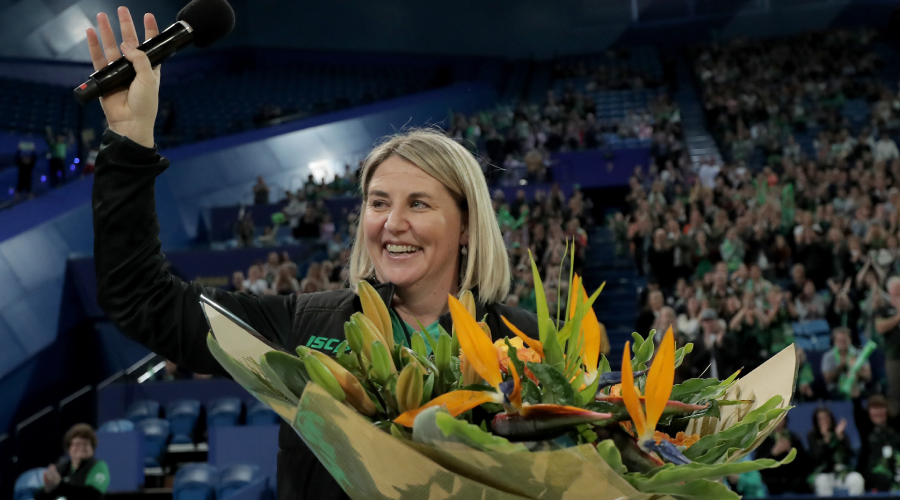 Nissan Arena will host the GIANTS and Vixens tomorrow afternoon in a first vs last matchup. The Vixens have had a disappointing season to date and will be looking to take out some positives from the season in their final three matches. The GIANTS, who looked out of sorts only a few weeks ago, have managed to turn their season around and find themselves on top of the current standings.

After winning their opening four games to the season, the GIANTS lost four of their next five encounters and were beginning to drop down the ladder. They have now won three of their last four games and are starting to peak at the perfect time in the season.

The Vixens have struggled to score in the past month, failing to score over 50-points in their last three matches. Tomorrow’s game won’t be any easier for the Vixens, as the GIANTS have the lowest points against across the entire competition with 615. On average, the GIANTS only concede 55.9 points. So, if the Vixens are going to pull off the biggest upset of the season, they will need to find a way to crack the 60-point mark.

In Round 11, the GIANTS had one of their best wins of the season, defeating the Swifts by 4-points thanks to a masterful third quarter performance. Maddie Hay’s presence through the midcourt was unparalleled, ending the game with 32 feeds, 19 goal assists, 15 centre pass receives and three deflections.

The GIANTS have one of the best mid-courts in the competition, with Hay and Jamie-Lee Price both in the top seven for Nissan Net Points this season. Hay and Price are also in the top six for goal assists in 2021, with 198 and 175 respectively. There is a strong connection between the GIANTS’ mid-court and their shooters, so the Vixens will need to improve their defensive structures heading into this match.

Mwai Kumwenda has been in terrific form this season, despite her team’s record, with another great performance last round in her 100th national league game. Unfortunately, the Vixens are struggling to find other avenues to scoring, with Kumwenda the only player on her team with over 100 goals this season. The Vixens are the only side who don’t have more than two players who have scored 100 goals or more in 2021.

This match is looking likely to be a one-sided affair, but from what we have seen so far this season, the team that is on top of the ladder typically doesn’t last very long. Could an upset be on the cards? 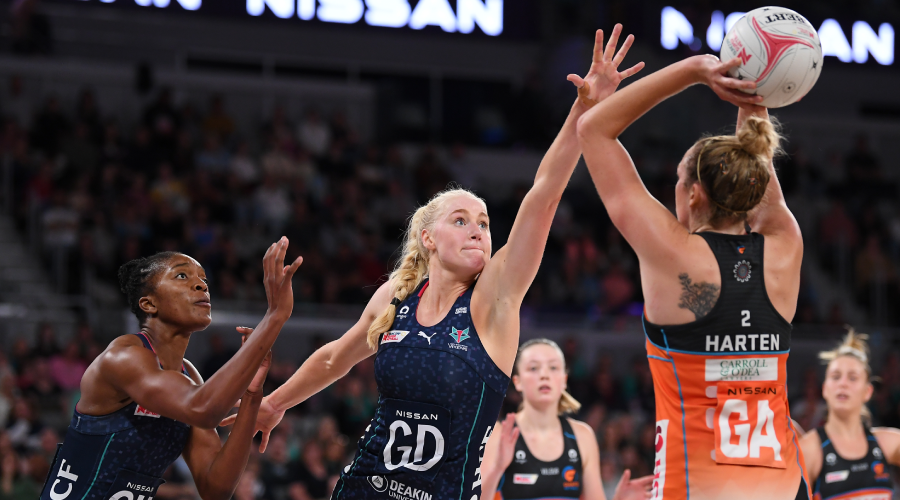 It’s Lightning vs Thunder in the final match of Round 12, with the game set to kick off at 6:30pm at the new home of Netball - Nissan Arena.

The Lightning were another team who blew the chance to take top spot, going down in a shock loss last week to the Firebirds by 10-points. Going into the match as heavy favourites, the Lightning started off well, until injuries to key players Steph Wood and Laura Scherian turned the game completely on its head.

The Firebirds made the most of a depleted Lightning’s outfit, outscoring their opposition by 10-points, ultimately the final margin. In great news for Lightning fans, both Wood and Scherian have been named in the Lightning's team list for tomorrow's game.

Here is an outrageous statistic: the Thunderbirds have never defeated the Lightning in the history of Super Netball. In the eight games that they have played, the Lightning have won all eight. The Thunderbirds almost pinched victory in Round 5 this season, going down by just 1-point thanks to two last minute goals from Steph Wood. Nine from nine is looking heavily on the cards again, as the Lightning will be looking to bounce back after a poor performance last round.

Shamera Sterling has been one of the shining lights for the Thunderbirds, putting together an incredible season to date. Sterling was the best player on the court when these two teams met in Round 5, recording a game high 96.5 Nissan Net Points, along with 11 deflections, seven gains and four interceptions. The superstar GK will need to be at her absolute best to give her side any chance of victory.

Super Shots really aren’t on the Lightning’s radar this season, as they are ranked last in attempts with just 45. To put that into comparison, the GIANTS lead the league with 149. The Lightning are the only team in the competition who don’t have more than two players in the top 20 for Super Shots attempted. Despite this, the Lightning are currently equal first on the ladder, showing that taking the direct route to goal is still an effective way to win games of Netball.

We have a big two days of Netball coming up so make sure you tune in to ensure you don't miss any action!