Learn how the Lightning kept their season alive with an Extra Time thriller, how two 100 game milestones were celebrated and how the Magpies' finals hopes were crushed.

With just one round to go, the top four has finally been confirmed with the Lightning claiming a spot in the finals after an exhilarating Extra Time finish to their clash against the GIANTS.

As a result, the Magpies' season came to an abrupt end and they will unfortunately play no part in the 2021 finals series.

There were two 100 game milestones in Round 13 along with some brilliant individual performances.

The Magpies did everything they could to pinch a spot in the finals in the first game of Round 13. Both teams would keep their finals aspirations alive with a victory here, but it was the Magpies who took the ascendancy.

Unfortunately for Collingwood, they couldn’t get the job done against the Fever on Tuesday evening, meaning their quest for a premiership will have to wait until next year.

Despite this, the Magpies had a solid 7-point win over the Firebirds and have claimed the season sweep after winning their Round 4 clash by 3-points.

Shimona Nelson was efficient in this Round 13 matchup, scoring 49-goals on 96% shooting accuracy. In comparison, Romelda Aiken only managed the 29-goals on a disappointing 69% shooting accuracy and was taken out of the game halfway through the second quarter.

The game was won with the Magpies’ ability to score off their centre passes. Collingwood had a centre pass to goal rate of 80%, with Kelsey Browne and Gabby Sinclair dominating the attacking third and feeding Nelson with ease.

On the contrary, the Firebirds had a centre pass to goal rate of only 60%, with Bueta and Ravaillion sharing a game high turnover total of eight apiece. The Magpies fed off of these turnovers, scoring 17% of their points off of unforced turnovers committed by the Firebirds.

Collingwood have only managed to win 25% of their first quarters this season, so to win the opening quarter by 6-points in this one was a clear indicator that they meant business. From then on, both teams went on their own scoring runs but the Firebirds just couldn’t close that first quarter deficit.

The ever consistent Molly Jovic and Kelsey Browne were in complete control through the midcourt, combining for 38-goal assists and 58-feeds. Gretel Bueta was the best for the Firebirds and lifted her shooting game with Aiken’s inconsistent shooting night.

The Firebirds will end their 2021 campaign against the Vixens on Wednesday night. A win would see them jump into fifth spot on the ladder and provide the Firebirds a solid stepping stone into next season. 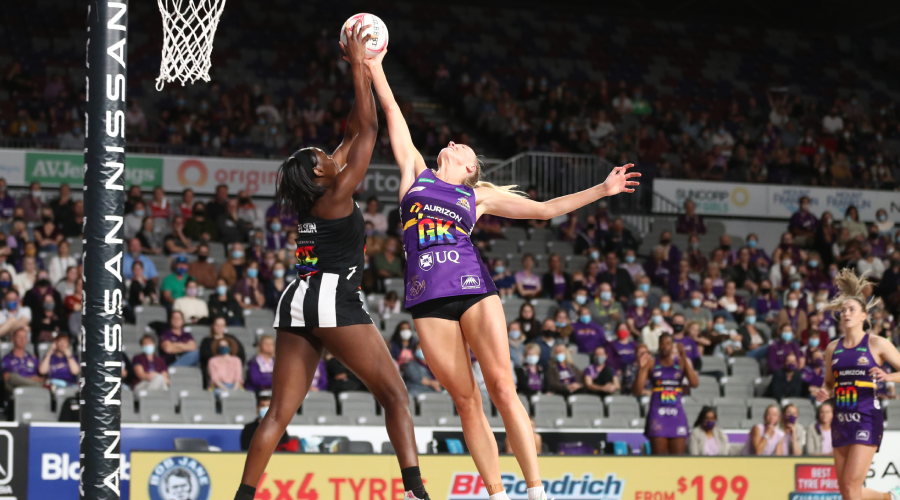 With neither team set to feature in the 2021 finals series, this matchup seemed uninspiring on paper. However, the battle to avoid the wooden spoon was the big story leading into this match.

The Vixens were two games behind on the ladder, however a win here could have seen them bridge the gap on the Thunderbirds and make things very interesting in the last round of the season.

Unfortunately for the Vixens, they suffered their 11th loss of the year, cementing the lamentable wooden spoon. In comparison, in 2020 the Vixens won 11 games and went on to win the premiership. Off-season couldn’t come quick enough for the Melbourne based team.

On the other hand, the Thunderbirds are finishing off the season in an encouraging manner, winning back-to-back games for only the second time this season. A win next week could even see the Thunderbirds move to sixth on the ladder, allowing them to take some confidence into next season.

Once again, the Vixens just struggled to score consistently. In three of their past four games, the Vixens have been unable to score 15-points in any quarter of these matches.

The Thunderbirds only took four more shots in the entire game, however, the Vixens shot at only 80% compared to the Tbird's 98%. Kumwenda once again was effective inside the circle, but unfortunately Barkmeyer and Stanton just couldn’t find their flow, shooting at a combined accuracy of 47.9%.

For the second week in a row, Elle McDonald came into the game to replace Hannah Petty at the centre position. McDonald had an immediate impact on the match and provided the Thunderbirds with some much needed composure and poise through the midcourt.

At the other end of the court, Georgie Horjus was in complete control of her attacking third and could do nothing wrong with ball in hand. Horjus recorded 15-goal assists, 19-feeds, 20-centre pass receives and scored 14-goals on 94% shooting accuracy.

Emily Mannix and Kate Moloney tried their best all game, but unfortunately it just wasn’t enough to will their team over the line and off the bottom of the ladder. 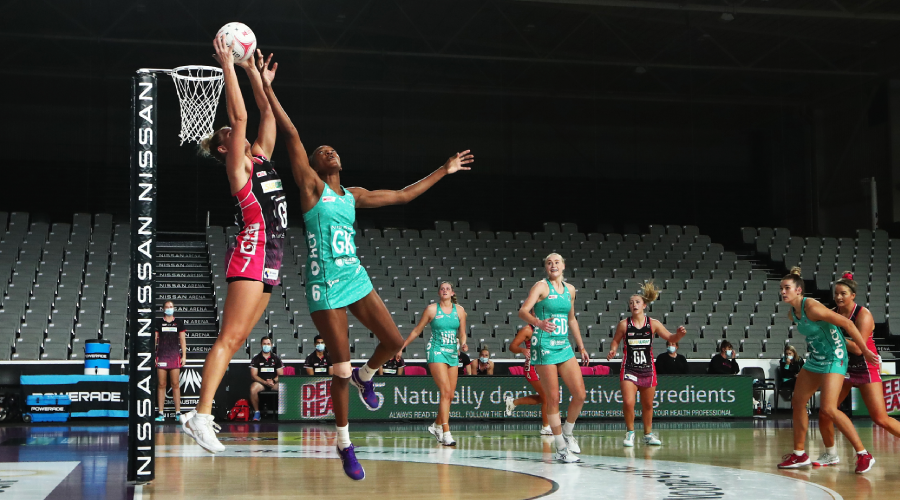 This was tipped to be the match of the round and it certainly didn’t disappoint. I still haven't stopped shaking after watching this game, I can't imagine how Lightning fans must be feeling.

With so much on the line for both teams, it was a heated and intense contest from start to finish. The Lightning had to win to guarantee a spot in the finals, with a loss opening the door to the Magpies.

Well, it came down to the dying seconds of Extra Time, but the Lightning got the job done and have now cemented themselves a spot in the 2021 final series.

Coming into this encounter, the Lightning have had the ascendancy over the GIANTS in recent years, winning eight of eleven games (including one draw). Not since Round 1 2018 have the GIANTS defeated the Lightning, and that drought will continue after this nail biting victory.

Perhaps these teams will meet in the finals series where the GIANTS can enact revenge.

If there wasn’t enough already to play for, both sides had milestones to celebrate, with Steph Wood and Sam Poolman both playing their 100th national league game.

Wood took home the win in her milestone, but unfortunately suffered an injury to her already worrisome knee. With finals just around the corner, Lightning fans will be praying the injury isn’t too serious so that Wood can play a part in their premiership quest.

April Brandley also left the court through injury in the last quarter, and will be another player to keep an eye on heading into finals. With such a snort turnaround between games, teams are going to be stretched in getting their players fit and healthy to perform each match.

Player of the match Mahalia Cassidy was simply inspirational all game. Leading from the front, Cassidy did everything to will her team to victory, finishing the contest with a game high 83.5 Nissan Net Points, 16-goal assists, 23-feeds, four gains, three interceptions and only one turnover.

Her counterpart in Jamie-Lee Price was equally as influential in attack for the GIANTS, however registered 12-penalties and a game-high six turnovers.

It was truly a battle of game styles, with the GIANTS taking ten Super Shots to the Lightning’s one. The GIANTS were effective from the Super Shot zone, converting eight of those attempts.

However, despite the Lightning failing to hit a Super Shot, traditionalists will be happy to see they came away with the four-points. And arguably the most important four-points of the season.

Unfortunately, due to the result in the earlier game, this match turned out to be a dead rubber. The Magpies were hoping for a GIANTS victory to keep their finals aspirations alive, however, the Lightning got the job done and officially extinguished those hopes.

It was always going to be interesting to see what performance the Magpies would bring, considering they just watched their season end right before their eyes and now had to go out and play a full game of Netball against the best team in the competition.

Well, when the Fever had doubled their opponents score after the first quarter, it was clear the Magpies were deflated.

With the top four as tight as it is, the minor premiership is still anyone’s to claim. Including the team who started the season 12-points behind the rest of the competition. It would truly be a remarkable story if the Fever can crown themselves the minor premiers of 2021.

Jhaniele Fowler is a force to be reckoned with at the moment and she will be taking some outrageous form into the finals. Fowler finished the game with 62-goals on 94% shooting accuracy, as well as recording a game-high 138.5 Nissan Net Points, 46 more than the next highest in Jess Anstiss.

The superstar shooter recorded a competition high 140.5 last week, and if Fowler didn’t sit for 8-minutes in this match, she would have surpassed that once again. Fowler has now recorded over 100 NNP for the sixth time this season, the only player in the competition to have more than three games over 100.

Despite the margin, Kelsey Browne tried hard all game and put in an inspirational effort to end the Magpies’ season. Browne finished with a game-high 21-goal assists and 29-feeds, and was moved into the centre position to provide that energy through the Magpies’ midcourt.

The Fever defence was in dominant form as usual, doubling the Magpies in deflections, gains and interceptions. The Fever were able to turn this defensive masterclass into scoreboard pressure, finishing the game with 12-goals from gains and a gain to goal rate of 67% (compared to the Magpies’ 29%).

Collingwood currently sit fifth on the ladder, but if the Firebirds can defeat the Vixens in Round 14 and the Thunderbirds knock off the Swifts, they could drop all the way down to 7th spot on the ladder. After an encouraging end to the year, finishing second last would be a true injustice to the way the Magpies played this season.

On the other hand, Round 14 will finish with the Fever taking on the GIANTS for what could be the battle for the minor premiership. 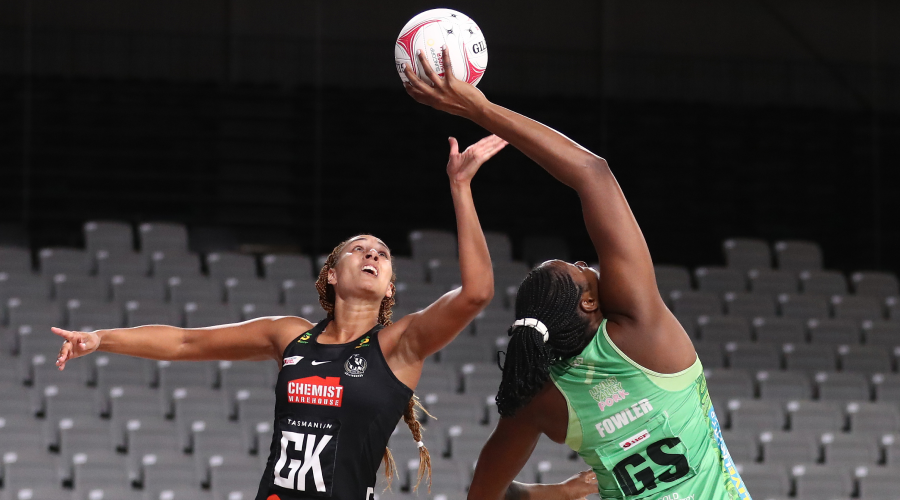 Round 13 Wrap: Jubilation and heartbreak > Components

Suncorp Team Girls Moment of the Week - Moment 3 - Round 13