Learn how the Thunderbirds, Firebirds and Vixens ended their 2021 campaign and find out how the top four will take shape leading into the finals series.

We finally made it. A month ago it was unclear how and if the season would be concluded, but after 14 grueling rounds, the regular season has come to an end, with the GIANTS crowned the 2021 Minor Premiers.

We must give a huge thank you to all players, staff, umpires, officials and broadcasters who have had to make enormous sacrifices throughout the year to keep this season alive.

You couldn’t script a better way to finish the last round of the season, as the top four teams went head-to-head to ultimately decide how the first week of the finals would take shape.

Here’s how they played out.

The round started with an unusual game on paper, as the Swifts were fighting to keep their hopes of a double chance in the finals alive, and on the other end the Thunderbirds were playing for nothing but pride. Despite this, fans were still treated to quite a competitive game.

There would have been quite a few sore bodies in the Thunderbirds’ camp, considering they had played against the Vixens two days prior to this matchup. That could have been the cause for their slow start, as the Swifts took a 5-point buffer into the first break.

From there, the Thunderbirds were unable to find the lead, with the game ultimately being decided by the same margin. Adelaide went on multiple runs and pushed their heavily favoured opponents the entire game, but in the end, the class of the Swifts was just too much to handle.

The battle between Garbin and Sterling was awe-inspiring. Sterling has had a remarkable season and finished off in style, recording six gains, five interceptions and seven deflections.

The superstar defender ended the season second in Nissan Net Points (952), first in interceptions (49), first in gains (95) and second in deflections (86) across the entire league. It’s a shame we won’t get to see her in action in the finals.

Hadley and Proud were superb through the Swift’s midcourt and will feature highly in their chance of going all the way in 2021. Proud will just need to tighten up her turnover tally, given she ended with a game-high seven general play turnovers.

Once again, the Swifts used their patented patient approach to goal, preferring to take that extra pass to ensure a high percentage feed into the circle. The Swifts dominated the time in possession count, ending the game with 56% of total possession. This would explain the high turnover count from Proud, considering the ball is in her hands for longer periods in a game compared to other Centre’s in the league whose team prefers to take the direct avenue to goal.

Even though they finished second last on the ladder, the Thunderbirds will take great confidence into the 2022 season, knowing they can match it with the best teams in the competition. The Thunderbirds closed out the season winning three of their final six matches.

The Swifts kept their hopes of finishing in the top two alive and will take on the Lightning on Saturday in the hope of securing a double chance in the finals.

Bonus stat: In her last five games, Lenize Potgieter has only missed two shots. That is 180 goals from 182 attempts. If I need someone to shoot to save my life, I know who I’m calling. 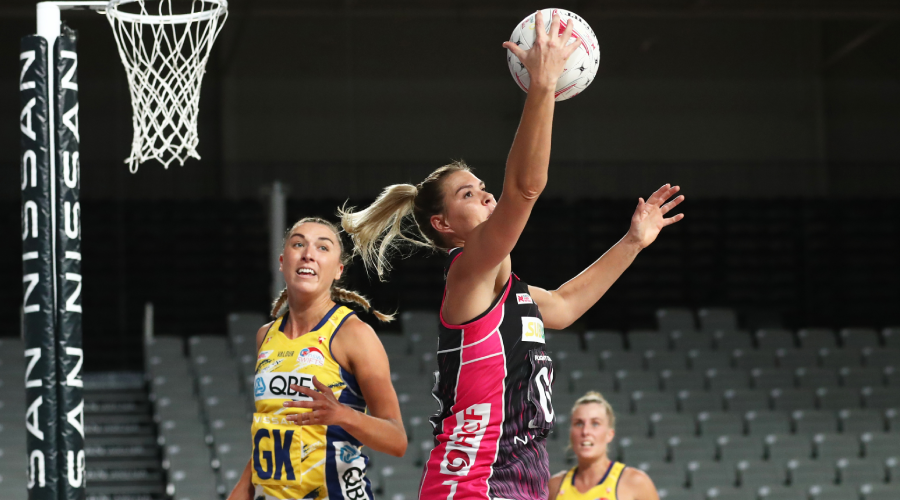 This match was all about finishing the season on a positive note for these two teams, with neither club featuring in the upcoming finals series.

The off-season couldn’t come quick enough for the Vixens, who have had a disappointing output in 2021, claiming the undesired wooden spoon after winning the 2020 premiership. In fact, they are the first team in Super Netball, ANZ Championship and Commonwealth Bank Trophy history to follow up a Grand Final win with a wooden spoon.

Nevertheless, the Vixens stormed out of the blocks to take a 3-point lead into quarter time. This marked only the third time this season that the Vixens have won the opening quarter. On both of those occasions they lead by just one.

Scoring has been an issue for Melbourne all year, averaging the lowest total points per game with just 50. So, when the Vixens put up 16 in the first quarter, a high score was looking on the cards.

However, the Firebirds completely dominated the second quarter, reducing the Vixens to just 11-points. Kim Jenner was exceptional in defence in the absence of Tara Hinchliffe, alongside Ruby Bakewell-Doran who was brought into the game in the second quarter to replace Rudi Ellis.

Interestingly, the Vixens' two highest team totals this season have both been against the Firebirds, scoring 66 and 58 in Rounds 5 and 14 respectively.

It was the battle between the two highest penalised teams in the league, and Wednesday’s match was no different. 116 penalties were called in this game, compared to 86 in the Swifts Lightning matchup.

Romelda Aiken was unstoppable inside the goal circle, finishing with 52-goals and 97.5 Nissan Net Points. Aiken ended the regular season as the third highest scoring player in the league with 531 goals. Accuracy is her only concern, as Aiken had the lowest shooting percentage out of the top seven players on that list.

Kate Moloney did what she has done all season, and that is give her absolute all for her team. Moloney ended up playing the third highest minutes in the league this season (841) and will be welcoming the break to recover and reset.

I expect that to change next season. 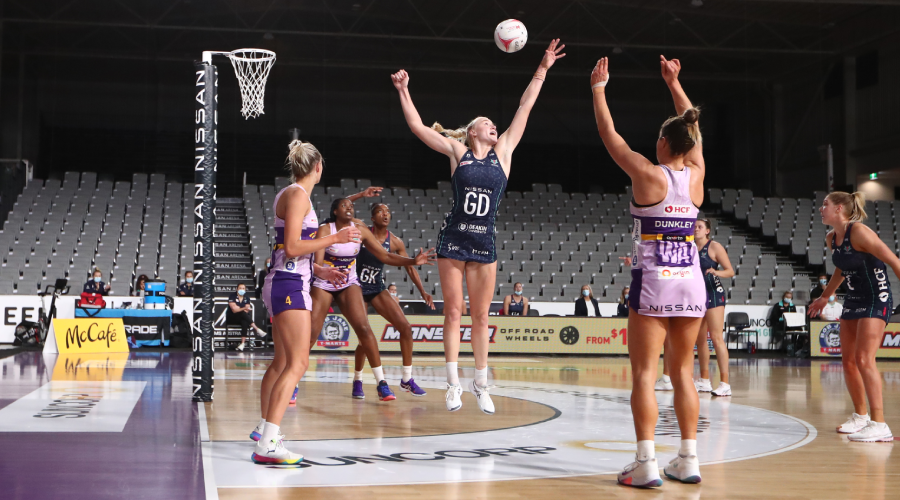 The first game of Saturday’s double header was played between the Swifts and Lightning at the new home of Netball - Nissan Arena.

The Lightning currently had the lowest percentage out of the top four teams heading into the round, so their chances of claiming the top spot were miniscule, however, victory would have gifted the Lightning a double chance in the 2021 finals series.

Unfortunately for Sunshine Coast fans, the Swifts got the job done with a 5-point win and secured themselves a spot in the major semi-final.

Spectators of the game would have been excused a double-take when they first switched on the game, with the Swifts donning their original yellow dress to celebrate 25 years of history. Under the captaincy of Liz Ellis, the Swifts won four Premierships in these distinguished uniforms (2001, 2004, 2006, 2007), with the hope of adding the 2021 Premiership to that list.

The Lightning were without star shooter Steph Wood, who suffered an injury to her knee in her team’s thrilling win over the GIANTS. The 29-year old is the Lightning’s second highest goal contributor, along with averaging the most goal assists for her team. With finals on the doorstep and a finals berth already secured, perhaps giving Wood an extra week to recover could prove beneficial in the long run.

The Swifts dominated the opening half, scoring their highest half time score of the season with 40-points. Sam Wallace led the way with 27 first half goals, as the Swifts only missed one attempt for the entire half. Wallace’s direct opponent in Phumza Maweni was taken out of the game in the second quarter and didn’t return to the match.

The lead ballooned out to 15-goals in the second quarter, as the Swifts dominated both ends of the court. A Super Shot flurry to close out the last quarter from Koenen made the final margin far more flattering than it should have been.

Maddy Proud was simply brilliant for the Swifts, finishing with a team high 90 Nissan Net Points, along with 42 feeds, 30 goal assists and three interceptions.

All eyes will be on how Maddy Turner recovers from a heavy clash in the fourth quarter which resulted in her being substituted out of the game. Turner is a crucial part of the Swifts’ lineup and would be heavily missed in their final on Saturday. 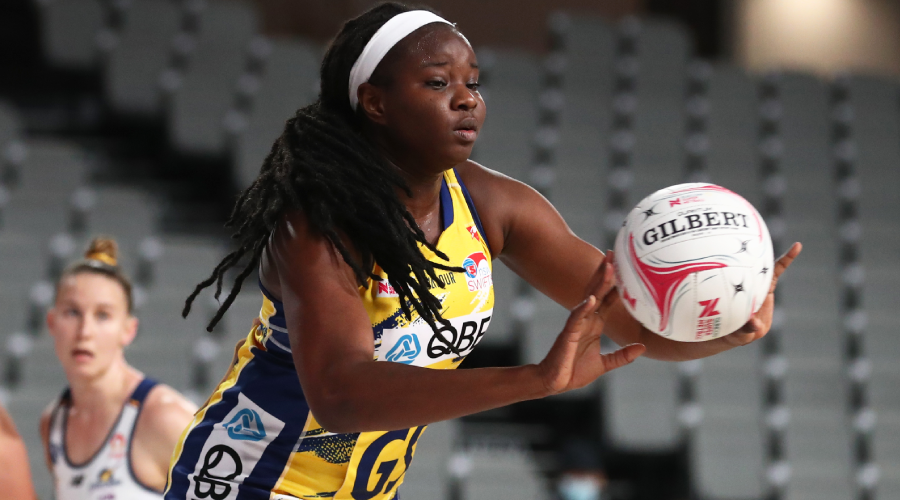 It’s hard to believe that the battle for the Minor Premiership came down to the last match of the final round. We promise you we didn’t script this, but how lucky are we that it unfolded this way.

With both teams locked on 32-points on the ladder and possessing a percentage unreachable by the Swifts, the winner would ultimately be awarded the 2021 Minor Premiership. And it was the GIANTS who came away with a hard-fought 2-point victory to claim their second Minor Premiership in Super Netball history.

When the Fever broke the record for the highest total points scored in a quarter (25) to open the game, as well as taking a 6-point lead into the first break, it was looking like the Fever would march towards top spot.

The GIANTS had other plans, however, dominating the second quarter to turn a 6-point deficit into a 1-point lead at half time. The Harten/Dwyer combination was too much to handle for a rarely beaten Fever defence, with the pair scoring 40 and 27-points respectively.

Having two players who can score at high volumes on the same team will be a challenge to defend in the finals. In contrast, Fowler scored 75% of the Fever’s total score. Now, this is obviously expected considering Fowler is the best shooter in the league, however, if team’s can find a way to reduce her impact on the game and force Teague-Neeld or Glasgow to beat them, they will go a long way to beating the Fever in the finals.

What is even more impressive with this win for the GIANTS is that they came into this game with only eight players on their list due to injuries and state restrictions. The GIANTS made no substitutions for the entire game, compared to the Fever who made 11 changes across the match.

With so much on the line in this game, along with such short turnarounds between recent matches, the ability to come away with a win against arguably the best team in the competition with only eight players to choose from is a giant effort (pun intended).

Last time these teams played each other back in Round 5, Courtney Bruce was the player of the match and led her team to victory. This time round, Bruce was unable to have the same impact in this game, finishing with only 47 Nissan Net Points and a game high 13-penalties.

There is no secret that the GIANTS favour the Super Shot more than any other team in the competition, and this game was no different. The GIANTS took 12-attempts from Super Shot territory and converted eight of those attempts. Harten scored five of those goals on 83% shooting accuracy.

The Fever will face the Lightning in the minor semi final and will go into this game as heavy favourites. The GIANTS will battle the Swifts in a NSW derby, with the winner going straight into the 2021 Grand Final.

Get ready for an exciting weekend of finals Netball! 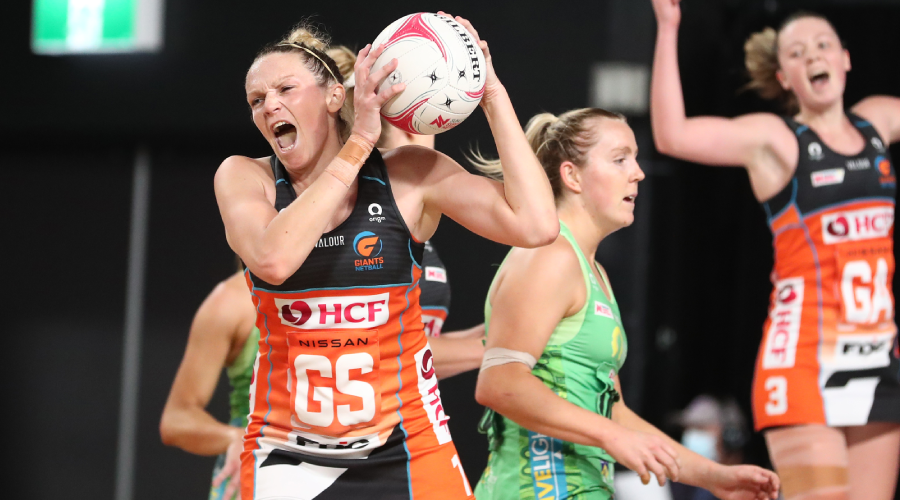