With Round 4 behind us, we are now officially more than a quarter of the way through the 2021 season. We break down all four matches from what was a thrilling Round 4 in our Round Wrap.

Coming into Round 4, fans might have been excused for thinking that this weekend of Super Netball might turn out to be a bit of a flop.

Let’s be honest now, only one of the four matches on the weekend was played between two teams in the top four, two of them were played between the two undefeated teams and the two winless teams, and the other was the reigning wooden spooners vs the consensus dark horse pick to win it all.

What we got instead was four hotly contested games, all of which were still in the balance with 20-minutes remaining. 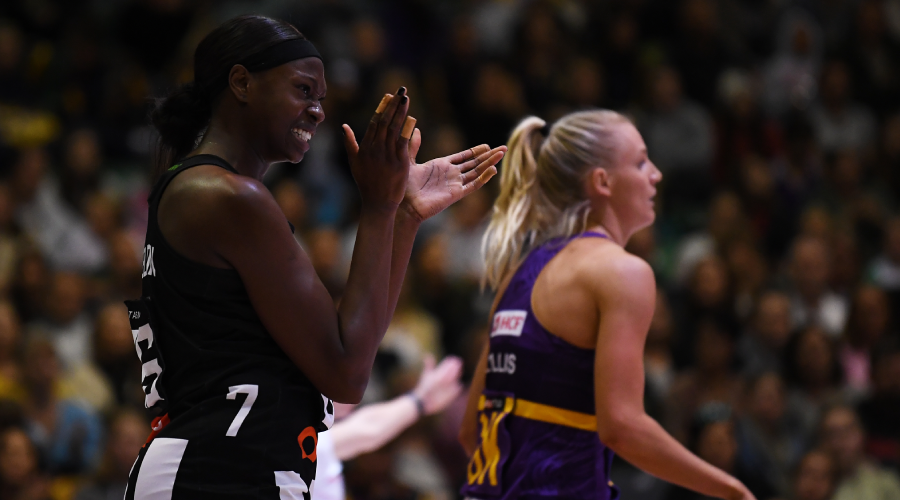 Welcome back to the top four, Magpies

There was a lot to play for in this Round 4 match-up, with the winner jumping into the top 4 and the loser falling behind the finals race. And it was the Magpies in a surprise victory against the heavily fancied Firebirds who now sit equal third on the ladder.

Collingwood, who remain unbeaten in Tasmania, carried over their hot form from last week’s win against the Thunderbirds, winning their first opening quarter of the 2021 season.

The Firebirds then responded in emphatic fashion, scoring seven straight points to start the second and take a five-point lead. Kim Ravaillion started to dominate the game in the Centre position, finishing with a game-high 42 Feeds.

The Magpies were able to claw back the lead, with the game tied at the main break. The match remained even throughout the second half; in what was a goal for goal shootout, with neither team able to break away.

The Firebirds were causing multiple turnovers, mainly due to the constant pressure from Tara Hinchliffe and Kim Jenner – however some uncharacteristic misses on the offensive end were keeping the Magpies in the game.

With scores tied with less than 5-minutes to go, it was the inspirational efforts of Ash Brazill who, in a desperate attempt, was able to keep the ball from crossing the baseline while also assisting Shimona Nelson for the go-ahead goal.

Nelson was the difference in the end, shooting an astonishing 98% on 55 shot attempts, earning herself the player of the match and leading her team to their second straight victory of the year.

The Magpies now face the Swifts in a very important encounter, with both teams locked on 8 points in third position.

It was a funny game for the Firebirds. They led the Magpies in many of the key stats, including turnovers created, Nissan Net Points and shots attempted, but to no avail.

That last stat is an interesting one. They attempted 74 shots to the Magpies 68, but only hit 60 of them (81%), and of those 14 misses, 10 of them were one-point shots. In the age of the Super Shot, it’s not unusual to see shooting percentages that low, but for so many shots to be missed from a “short” distance is concerning. It’s also the second time the Firebirds have had more shots than their opponent and lost, they did the same in Round 1 vs the Swifts.

The tools are all here for the Firebirds to dominate this league, but they need to start converting on those opportunities and putting teams to the sword. 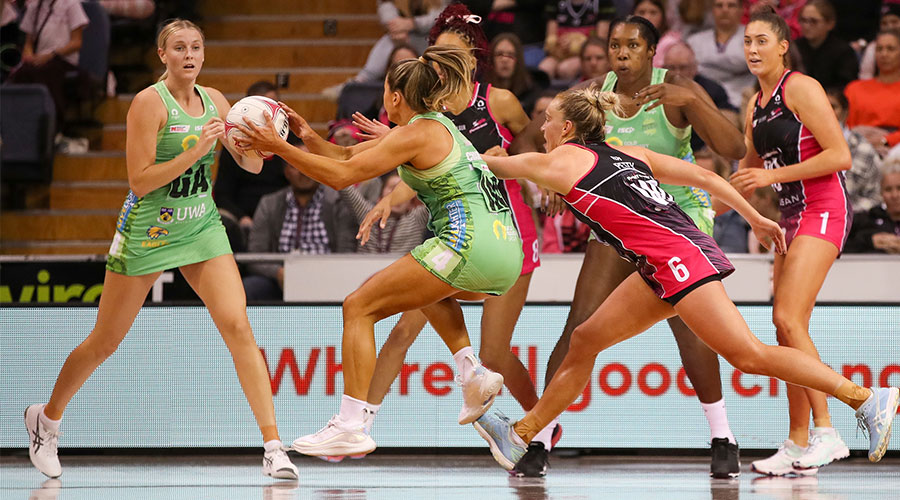 Who can stop the Fever?

The Thunderbirds gave the Fever everything they had on Saturday night, and for a minute there, I thought we might be in for our second upset of the weekend.

Georgie Horjus was flying around, Shamera Sterling had four gains in 15 minutes and Hannah Petty was all over Verity Charles in the middle.

But, for the fourth straight week, the Fever have come out of the quarter time break and outscored their opponent through the next three quarters by double digits. This week they erased a nine-point deficit and evened up the scores at half time, jumped out to a seven-point lead after three before running away eight-point winners.

I spoke about it in my Game Changers piece for Round 4, but it’s worth mentioning it again here that much of the credit should go to Head Coach Stacey Marinkovich. She’s making such great personnel changes throughout the match, plugging holes in her team’s game plan and exploiting the weaknesses of their opposition.

In this one, the Courtney Bruce and Stacey Francis combo seemed to be struggling with the size and speed of Georgie Horjus and Lenize Potgieter, who combined for 21-points in the first. On came Sunday Aryang at GD, Stacey Francis, Jess Anstiss and Verity Charles all slid up one, off came Emma Cosh and Alice Teague-Neeld was replaced Sasha Glasgow at GA.

Not many teams could support so many changes at once, which really highlights the experience of this Fever team. They are battle-hardened and they are rolling after four straight wins.

Which brings me to the question raised in the heading. Who can stop the Fever?

They are proving to be a complete package. Ultra-efficient and prolific in attack, with the highest centre pass to goal rate (73.9%) and total points scored (267), stout in defence, with the second lowest points against (222), and deep across the court.

So, who can beat them? Stay tuned for my tip for the team most likely a little further down... 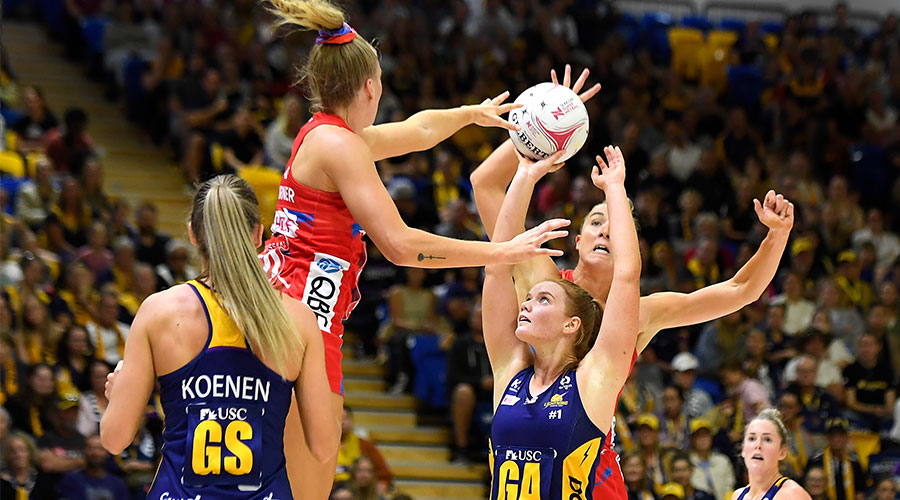 How good was this game?

Highlight reel plays by the minute, a full-throated Lightning crowd, two of the best midcourts duking it out and some of the most breathtaking defensive play you’ll ever see.

Whether it was Phumza Maweni’s huge shot rejection on Sophie Garbin, Maddy Turner’s deflection/pickup/somehow keep it in play at the beginning of the last quarter, one of Sarah Klau’s many incredible reads or eventual player of the match Karla Pretorius’ huge intercept to seal the game late, this one had it all for those who love defence.

And it wasn’t just coming from the GK’s and GD’s, even the midcourters were getting in on the action.

Mahalia Cassidy was immense on the Swifts circle edge, picking off swing passes and setting up her teammates to come out flying. And the same can be said for Nat Haythornthwaite and Paige Hadley for the Swifts, who both came up with great defensive plays throughout the game.

Of course, it was the Lightning who got the win in the end, thanks to a 14-10 third quarter and steadfast final 15. It was the perfect bounce back performance for the team after Round 3’s disappointing blow-out loss to the Fever.

The Swifts will take a lot out of this one and probably consider it a match they should have won. Penalties hurt them, particularly in the defensive shooting circle, where they were called for contact 31 times.

Another great chapter in what has become one of the best rivalries in the sport. 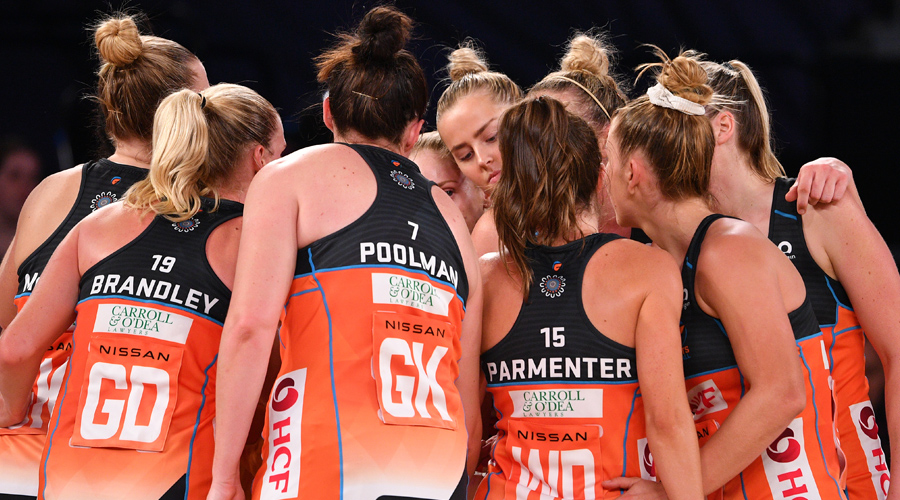 Much like the Thunderbirds, the Vixens came out and made this one much more interesting than most would have tipped it to be, but this GIANTS team is the real deal in 2021.

No surprise here, they are the one team I would back to halt the Fever. And they’ll get a chance to do just that next Monday night in Perth.

But, and it seems silly saying something like this about a team fresh off a 14-point win, they might be in for a rough night if they play the way they did against Melbourne.

The Vixens defended fiercely, particularly their defensive transverse line, where Hannah Mundy and Kaylia Stanton feasted on GIANTS attacker’s outlet passes. But, despite their best efforts and a couple of really strong stretches of play, the GIANTS always seemed to have the answers.

And that’s the sign of a good team. When you are challenged and the opposition seems to have your number, how do you respond? How effective is your plan B, C and D?

Jamie-Lee Price, who came into this match leading the league in assists and feeds, looked a little off on the night and led all players with six turnovers.

So up stepped Maddie Hay as the main feeder, and what a game she had. 45 feeds, 40 with an attempt and 25 goal assists (that’s 75% shooting for you) and she pushed the tempo of the game when the Vixens were desperately trying to slow it down. Her best game in the SSN, without a doubt.

I mentioned her earlier, but it would be remiss not to talk about struggling Vixens shooter Kaylia Stanton. It was another tough game for Stanton who shot just 44%, including six from 14 from one-point land, and turned the ball over five times.

This one felt like the game where the Vixens coaches asked Stanton to prove it. They brought her in because they obviously saw something in her and were confident she could get the job done at GA. She’s a professional athlete going through a shocking run of form, and sometimes you need to just say “work through it and iron out your kinks”. She got her most minutes as a Vixen by far with 52 in this one as Simone McKinnis clearly left her out their to work through her demons and build those on-court relationships with her teammates.

What will be interesting to track from here, will be how the coaching staff handle her place in the squad now that she has been given the opportunity to cement her place as the starting GA and struggled.

Whatever happens, the Vixens will be desperately trying to avoid doing something they haven’t done since 2010 when they come up against the Firebirds this Saturday; lose five straight matches.