Two state derbies highlight what is a massive weekend of Super Netball. We breakdown the final four Indigenous Round matchups in our Round 6 Preview

What a round of netball we've just enjoyed!

Two games decided by just one-point, two decided by shots after the siren, controversial calls, one of the best debuts in Super Netball history, heartache and all of that while netball celebrated the first weekend Indigenous Round.

It was huge, so can Round 6 back that up?

It gets off to an intriguing start, with a matchup between the fourth placed Fever and the fifth placed Magpies.

Unfortunately, due to the on-going coronavirus situation in Melbourne, this one will be played on neutral turf at Sydney’s Ken Rosewall Arena in front of no one but the support staff and security guards.

Which is a shame, because I think this one could be sneaky good.

Fresh off their emotional victory against the top-of-the-table GIANTS on Monday night, the Fever have the most potent shooting circle in the competition (333 points for),the third stingiest defensive unit (287 points against) and are book-ended by the league’s leading scorer in Jhaniele Fowler (226) and the intercept and gains leader in Courtney Bruce (11 and 21).

But, despite being 5-0, it’s not all roses for the Fever. Their starting line-up, which has been the same for all five matches, has been torched in the opening quarter of every game since Round 1 and outscored 67-88 in the opening 15-minutes so far this season. Those slow starts are yet to catch up with the Fever yet, but it’s only a matter of time.

One place the Magpies will feel they have the ascendency on the Fever is through the midcourt, where Kelsey Browne, Ash Brazill and Molly Jovic are putting together solid seasons.

No one has more goal assists than Browne’s 87 and only Maddie Hay can boast more feeds than her 131, Brazill seems to find herself on the plays of the week reel every Monday and Jovic has developed into one of the most consistent centres in the competition.

Turnovers have been a huge issue for the Magpies, who lead the league in general play turnovers, and that’s not a great place to be coming up against a Fever side with a 78.5% gain to goal percentage.

If they can cut down on the mistakes, they might be able to outwork this Fever midcourt and keep up with their potent attack. All eyes should be on the Jhaniele Fowler vs Geva Mentor matchup which never fails to produce some fireworks. 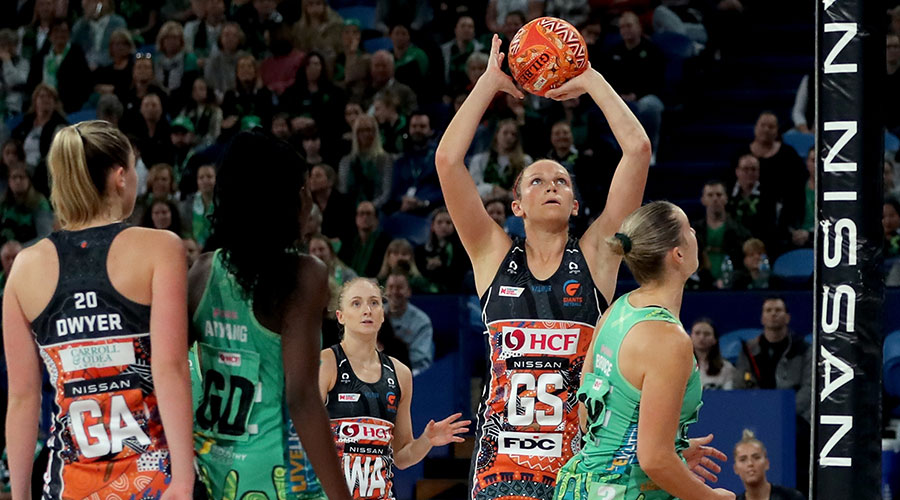 When it comes to blockbuster matchups in Super Netball, it doesn’t get much bigger than the NSW derby. And this year’s chapter in the rivalry between the GIANTS and Swifts might just be the best one yet.

These two teams have met eight times, the Swifts have won four times, the GIANTS three and, when they met in Round 14 last season, it ended in a high-scoring 77 to 77 draw.

There’s a lot on the line in this one too.

A GIANTS win should keep them on top of the ladder, no matter what happens during the rest of the round, while potentially knocking their state rivals out of the top four. A Swifts win would see them draw equal with the GIANTS and, depending on other results and how much they win by, could even see them atop the table by round’s end.

And, of course, there’s the matter of pride at stake here. It’s been almost two-years since these two teams last played each other in Sydney and there’s nothing like winning a derby on your own turf, in-front of your own fans.

And it’s too close to call who will do just that on Sunday.

That GIANTS attack is unbelievable, particularly when the Power 5 buzzer sounds. They have scored 332 points this season, with 80 of those coming from Super Shots, by far the most in the league.

Conversely, this Swifts attack prefers to keep hitting those high-percentage one-point goals, shooting an incredible 93.4% from one-point range while opting to attempt an equal-low 25-Super Shots. Both teams go about scoring in very different ways.

Defensively, these two are hard to separate, especially with GIANTS defender April Brandley set to return to the squad this weekend. While the Swifts allow a league-low 56.6-points against per game, no team gains possession from the opposition more than the GIANTS, who have 76 gains through five rounds. Surprisingly, the Swifts have the least gains of any team so far, with just 57.

Keep an eye on the midcourts in this one. The GIANTS young and physical mids have been running amok this year, dictating the pace of games, racking up huge gain numbers and punishing teams in transition. This talented Swifts group, which will welcome back co-captain Maddy Proud for this game, has been getting the job done while not looking completely settled with its combinations. 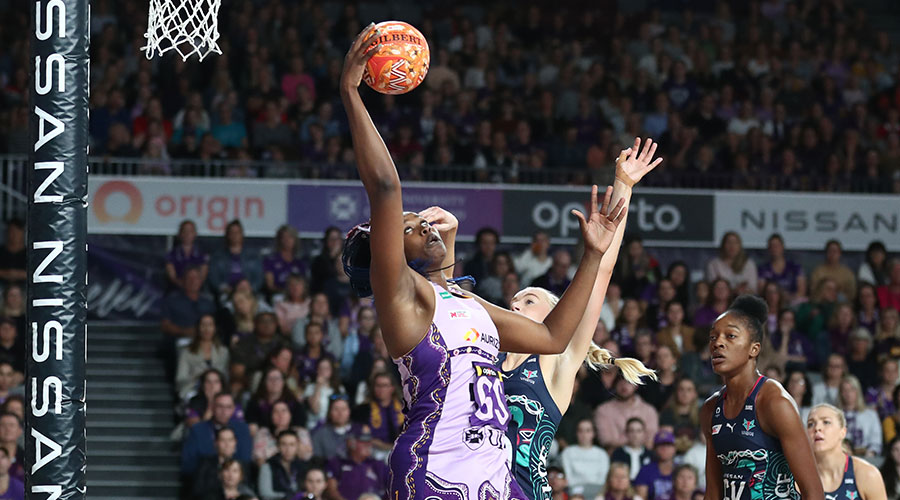 And if one state rivalry match wasn’t enough for your Sunday, well flick on your Telstra TV or the Netball Live App and settle in for the ninth instalment of the Sunshine State Derby.

And what a huge game in the context of both team’s seasons this one is. The Lightning are sitting second on the ladder and looking to keep the pressure on the GIANTS while the Firebirds have just one win and are desperately trying to stay in touch with the top four.

It’s certainly surprising to see this Firebirds team struggle the way it has in the early stages of the season.

Offensively, this team is firing on all cylinders, putting up match-winning scores every match. And the team certainly causes enough changes in possession to be able to over-power most teams. But the mistakes are killing them.

Only the Magpies and Thunderbirds turn the ball over more than Queensland, who have 120 general play turnovers on the year, and the penalty count is getting out of hand. As a team they average 68.4 contact and obstruction penalties a game, 8.4 more per game than the next team.

When we are talking about losses of three points, seven, three and two, those turnover and penalty stats are the difference between singing the team song in the change room and angry members calling for a new head coach five weeks into Megan Anderson’s coaching career… which is ridiculous.

Meanwhile, the Lightning survived an upset of their own in Round 5, fending off a very determined Adelaide Thunderbirds in their one-point win in Adelaide.

It was a hard-fought contest with the winless Thunderbirds outplaying the Lightning for large chunks of the afternoon. But the Lightning should be thrilled with the way they fought back after giving up the lead late in a building completely against them.

While these two midcourts are brimming with big names and the battle between the all-Australian Firebirds defence and the Australian led Lightning attack should be fascinating, I think the key matchup here will be between this high-octane Firebirds attack and the Protean-powered Lightning defence.

Karla Pretorius vs Gretel Bueta is one of the best matchups to watch in all of netball but look out for Phumza Maweni vs Romelda Aiken. Both are in red-hot form, particularly Maweni, who is having her best Super Netball season yet. 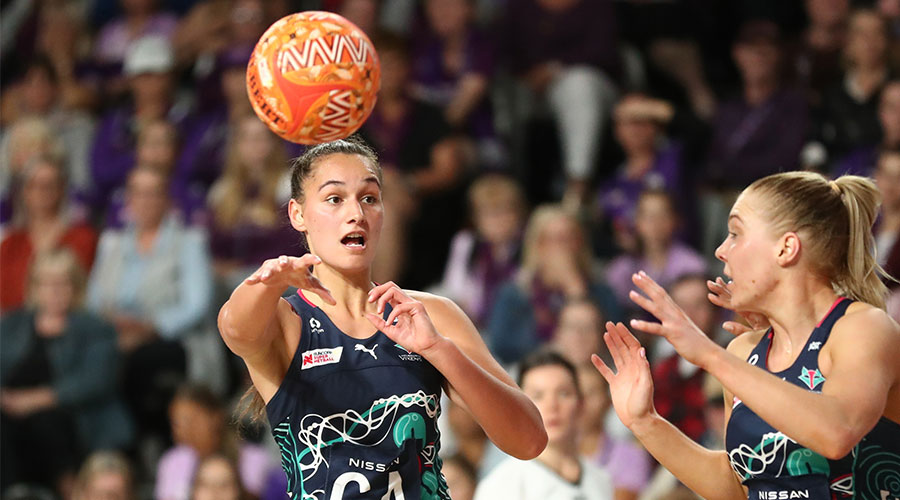 A week ago, I would have said that if the Adelaide Thunderbirds were still winless coming into Round 6, this matchup against the Melbourne Vixens would have been their best chance to snap their losing streak.

Now, thanks to Round 5 hero Rahni Samason, this one just got a whole heap juicier.

It was amazing to see the difference having Samason in this Vixens attack end made. They looked like the same team with an incredible defence that led the Vixens to their first Super Netball title last year, coached by the Joyce Brown Coach of the Year winner in Simone McKinnis, with a midcourt missing just one (admittedly huge) piece in Liz Watson passing the ball to the reigning Grand Final MVP and friends.

She just slotted in so well, hitting 19 from 19 one-pointers and eight of ten Super Shots, including the after the siren game winner. But, like any player who plays the majority of the game at GA, it was more than what she did on the scoreboard. 16 feeds, ten assists, a sneaky intercept and, the number that no doubt brings a tear to every Melbourne fans eyes… one turnover.

The big question is, can she back it up and get this Vixens team back in the finals hunt with a win against a Thunderbirds side that looks due?

She’ll be going head-to-head with Shamera Sterling and Matilda Garrett, who are coming good as the Thunderbirds’ starting defensive pair. Sterling is coming off a player of the match worthy performance against the Lightning, finishing with 11 deflections, seven gains, four intercepts and two rebounds. She was everywhere and seems to be enjoying playing alongside Garrett who has been impressive.

Things are also coming together up the other end of the court. Lenize Potgieter is as steady as ever at shooter and looks even better when she has the crafty Georgie Horjus working the shooting circle with her. Sam Gooden might be automatic in the Power Five, but Horjus has to be out there for the majority of the match for the Thunderbirds to be successful.

The matchup I’m looking forward to watching most is a classic wing attack vs wing defence battle between Maisie Nankivell and Kate Eddy.

Reigning Rising Star winner Nankivell is such a consistent performer and had a huge 42 feed, 25 assist game against the Lightning. If she can solve this tough Vixens defence, the Thunderbirds should snap this five-game losing streak and it will be up to Eddy to keep her off circle edge.

Round 6 Key Match Up - GIANTS vs Swifts

Round 6 Indigenous Round Round Preview