Round 6 of the 2020 season was fast, frenetic and (finally for Firebirds fans) fun. But what did we learn from these four huge matches?

After six wild rounds of Super Netball, the dust has finally begun to settle on the 2020 season, and the favourites are starting to emerge.

But the biggest story out of Round 6 didn’t come from the top of the ladder, but down the bottom, where Firebirds fans enjoyed something they haven’t for the first time in over a year – a win.

Let’s get stuck into Round 6.

The Swifts knew that the 2020 season wasn’t going to be easy, and that was before COVID-19 did everything in its power to derail the competition.

The 2019 underdog champs had a target placed firmly on their backs the second they raised the premiership trophy last September.

And it has shown in all six matches so far this year.

Last year, the Swifts average winning margin was 11 points, only one win was decided by one point, the other 11 came by four points or more and seven of those were double digit point wins.

Besides their 15 point win over the Thunderbirds and their seven point loss to the Lightning, the Swifts have won by just two, one, seven and then again by two against the plucky Magpies on Saturday.

It’s been hard going, and it’s taken all 60 minutes to get the job done. But you know what? The job gets done.

Head Coach Briony Akle has her players believing that they can win no matter what. The scores were level at three quarter time on Saturday and the Magpies were threatening. They found a way to overcome them. The Fever came all the way back to tie the scores with 50 seconds to go in Round 2. They found a way to hold them off.

These Swifts are battle hardened, and that will be incredibly important in the pointy end of this condensed season.

First and foremost, hats off to the Firebirds, who won their first game in 370 days on Saturday. It was a win you could feel coming since they were embarrassed in front of their home crowd by the Vixens in Round 2.

They were hungry, determined, and they looked emotionally invested in the game - Three things we can’t say about the Fever.

When the Firebirds came out after the quarter time break and scored 19 points to 9 to go up by eight at half time, you could almost sense that the fight had gone out of the Fever.

The two things you could highlight as the keys to victory for Queensland was secondary scoring and midcourt pace, two areas that West Coast have struggled with since 2018.

In particular, the glaring need for secondary scoring was highlighted in this loss.

Tippah Dwan, who’s filling the Goal Attack position left vacant by Gretel Bueta, scored 23 points in the win and demanded the respect of the Fever defence. This freed up Romelda Aiken to score 42 points of her own.

Up the other end, yes Jhaniele Fowler scored her obligatory 50 points for the game, but Goal Attacks Alice Teague-Neeld and Kaylia Stanton could only manage seven between them. That’s just too easy to play against defensively.

Head Coach Stacey Marinkovich needs to work out whether there’s a player on her roster that can support Fowler every week. But we have a terrible feeling the answer is no.

It’s been a rough start to the 2020 season for the GIANTS.

They’ve managed just one win, a tough draw against the then winless Firebirds, four losses and have been at the centre of one of the most controversial on court decisions ever in the sport.

Given the rough lead into their Round 6 matchup against the ladder leading Melbourne Vixens, many would have forgiven them if their minds were elsewhere during the game.

But, as they strolled into the locker room at halftime with a five point lead and all of the momentum, it looked like all of the adversity had galvanised the group.

Despite their eventual five point loss, that still may be true, it was just unfortunate they were playing against the form side in the competition.

What the Vixens attack end were able to do in the third quarter against one of the toughest defences in the competition was pretty incredible.

They shot 16 from 17, including four from Suncorp Super Shot range, for 24 points. Liz Watson and Kate Moloney owned the circle edge, racking up 16 feeds and 10 goal assists between them in the quarter. And, as a team, they had just 2 turnovers.

That’s some clinical netball right there.

And they did this with a completely different shooting circle, with Mwai Kumwenda at Goal Shooter and Caitlin Thwaites out in front at Goal Attack.

This is going to be a tough team to shut down this year. 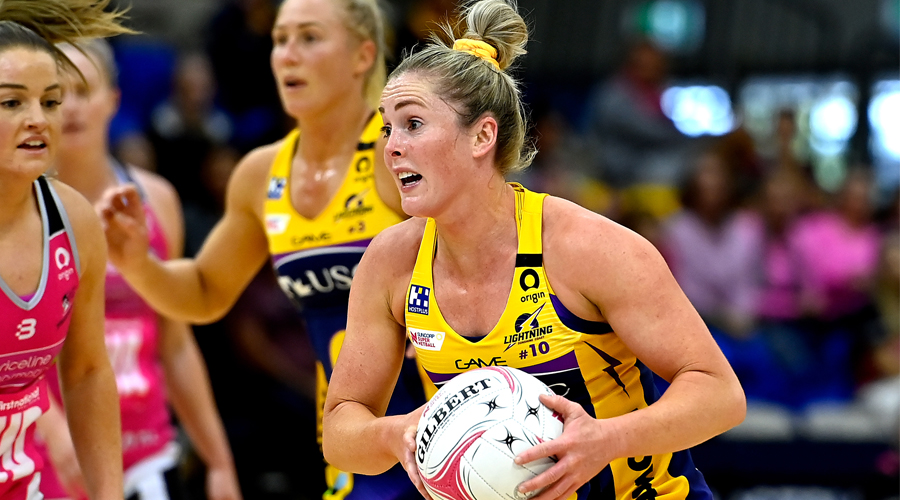 TBirds go return to the herd

After back-to-back impressive wins, including a huge one over the Vixens, the Thunderbirds couldn’t make the most of their chances against a Lightning side that gave them plenty.

They outscored the Lightning in the second and third quarters and came into the final 15 minutes trailing by just one.

But the wheels eventually fell off and the Lightning made them pay, outscoring Adelaide 14 points to seven to secure the eight point win.

The problem; turnovers. So many Adelaide turnovers!

When they weren’t giving up held ball turnovers, they were throwing it straight to players in yellow and purple dresses.

And full credit has to go to a Lightning team that had seven gains, including five intercepts, in the final quarter alone! They are numbers that most teams would be thrilled with over the course of an entire game!

Round 6 Super Netball 2020 Round wrap