The 2019 Suncorp Super Netball season is rolling along nicely.

It’s tight at the top with the just two wins separating the league leading Swifts and forth place GIANTS, who knocked off the Thunderbirds to jump the Magpies in Round 6.

And all four of the outsiders looking in have proven that, when they get it right, they can trouble anyone.

With just three rounds to go before the Netball World Cup break, all eight teams will want to go into the month off with some momentum.

So, with the help of Firebirds and Diamonds legend Laura Geitz, let’s get stuck into the Round 7 match-ups.

Both the Thunderbirds and Lightning will come into this game, the first ever Suncorp Super Netball game to be held in Darwin, looking to get back in the win column after disappointing losses in Round 6.

The high-scoring Sunshine Coast Lightning were shut down by the Vixens last week. Peace Proscovia, who has averaged 36.4 goals per game so far this season, could only manage 26 last week and, with a showdown against Shamera Sterling on the cards, it wont get any easier in Round 7.

However, it wasn’t all roses for the Jamaican goal keeper in Round 6, who was outplayed by Caitlin Bassett for much of the game. She’ll be keen to bounce back against one of the world’s most prolific scorers.

But it’s a match-up between Maria Folau and Karla Pretorius that Geitz feel could be the one to watch at Territory Stadium on Saturday.

“There is so many huge match-ups in this one. Both teams have so much national level talent all over the court. But it’s hard to go past Pretorius vs Folau.”

“These two ladies know each other’s game inside and out and both are in really good form. Karla is an absolute freak at goal defence but Folau is such a smart player. This will be incredible to watch.” 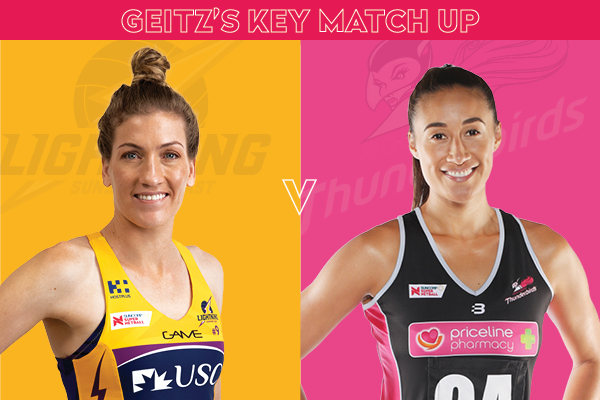 But, with the addition of Caitlin Bassett and the huge play of rookie Amy Parmenter, it will be a very different GIANTS team that makes the trek across to Perth on Saturday night.

After a slow start to the 2019 season, the Fever are playing much better netball, drawing two games and winning one over the past three weeks.

Much of this is thanks to the return of their inspirational leader, Courtney Bruce, who’s massive match-up against fellow Australian Diamond Caitlin Bassett is Geitz’s key one of the match.

“Bassett’s found some really good form. Of course it was going to take a couple of weeks to get back into the swing of things with her new team and teammates.”

“Bruce struggled a bit in Round 6 against the Firebird’s moving circle. Her bread and butter is the holding goaler, so I’m sure she’ll be excited for this match-up against her Diamonds teammate.” 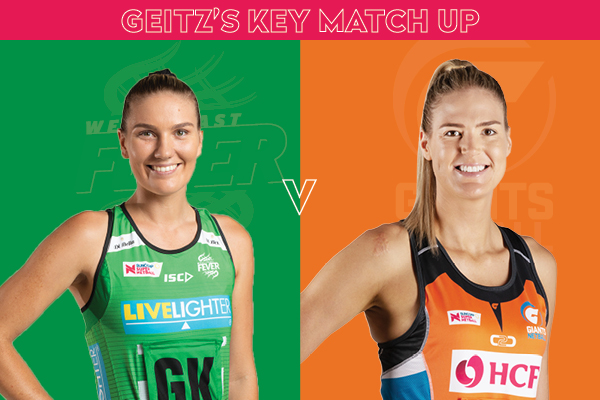 Number one on the ladder vs number eight is usually a recipe for disaster, but there will still be plenty to intrigue in this clash between the Firebirds and Swifts.

It’s hard to fault what the Swifts have achieved so far this season as they lead the league in wins, bonus points and goals scored and are second in goals against.

Things haven’t been running so smoothly for the Firebirds however, who have been ravaged by injury and have yet to secure a win so far in 2019.

But things are looking up. Over the past two weeks, the Firebirds have been much more competitive, losing a closing game to Adelaide and drawing to the Magpies last week. And the big part of this form shift has been the elevated play of Kim Jenner and Tara Hinchliffe in defence, and they face their biggest test of the year in Helen Housby and Sam Wallace.

“In my opinion, no team so far has really managed to disrupt the Wallace-Housby pairing so far this year. And that could be the key to beating the Swifts.”

“If Jenner and Hinchliffe are both on their game, I think they are capable of really breaking down that partnership and making life difficult for the Swifts attack end.” 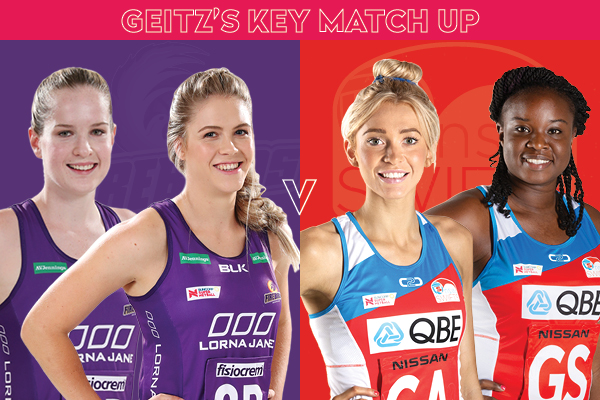 The final match of Round 7 will be the first Melbourne Derby of the season, as the Vixens take on the Magpies on the Queens Birthday holiday.

After a disappointing performance against the Swifts, the Vixens bounced back last week, halting the Lightning’s run of four consecutive wins. And they did it by relying on their air-tight defence, which has allowed a league low 323-goals against.

But those kind of stats seem to go out the window in these derby matches, and the inconsistent Magpies will be keen to outwork their cross-town rivals which all starts in the middle.

Geitz’s key match-up for this game will be a battle of the wings – Kelsey Browne and Ash Brazill vs Liz Watson and Renae Ingles.

“Both of these teams have plenty of fire power in the attack end but it’s the work around the circle edge that makes them tick.”

“Kelsey and Lizzy are such dangerous players at wing attack and can really take over a game. Braz and Renae will have their hands full trying to slow them down.” 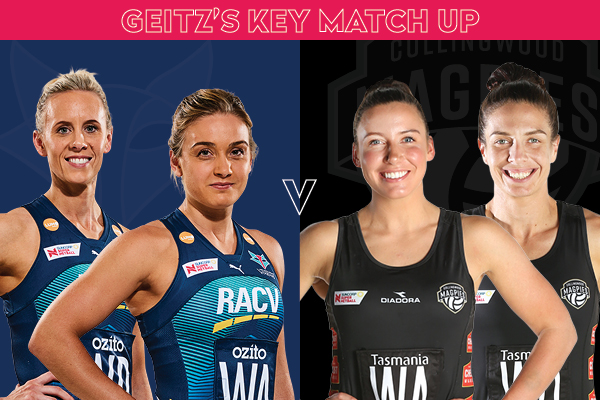 Round Preview Round 7 Head to Head Laura Geitz Preview