The midway point of the 2020 season brought us our first round of rematches, including the second Grand Final replay. And it did not disappoint.

It’s wild to think that the midway point of the 2020 season has now come and gone.

While it’s strange to go into Round 8 without all of the teams playing each other once, we did just enjoy our first round of rematches which is are always juicy.

We got our second Grand Final rematch of the season, the top of the table Vixens had an opportunity to make amends for their only blemish of the year, and, after game one between the Firebirds and GIANTS ended in a draw, everyone was pumped for another thrilling finish.

Did it live up to the hype? Let’s take a look.

We mentioned in the Round 7 Preview article that this was a must win game for both teams.

For the Magpies, a win here would snap a three-game losing streak and keep them in the finals conversation going into the second half of the season.

For the Fever, it was a chance to go into Round 8 sitting in the top four.

Unfortunately for the Magpies, it was the team wearing green dress number three of seven that came away with the chocolates on Tuesday night. And they did it with ease.

Jhaniele Fowler did what she does every week; score a bucket load of goals. She ended the night with 62 points and was truly unstoppable for the whole match.

Up the other end of the court, Fever captain Courtney Bruce had an unbelievable match at Goal Keeper. After struggling through with a back injury for the first six rounds, she broke out and completely shut down the Collingwood attack end, racking up six intercepts, eleven gains and eight deflections in her Player of the Match performance.

The biggest concern for the Magpies is the health and fitness of stud Goal Shooter Shimona Nelson, who played just 26 minutes for the match. Her minutes have been steadily declining over the past three rounds and there’s no denying they are a different team without her.

They need to find a way to get her out there when the game is on the line.

Now that’s what we’re talking about! What a game! What a finish!

Tied up at halftime, two points at three quarter time and a goal on the siren to win it after a Super Shot tied it up with ten seconds remaining.

The GIANTS will be thrilled with how their attack end operated, particularly the way they were able to adjust when the Jo Harten and Kiera Austin combination wasn’t working. Caitlin Bassett, who started on the bench, was brought in midway through the second quarter and absolutely schooled the Firebirds young defenders.

Firebirds fans will be loving the play of Macy Gardner and Mahalia Cassidy, who looks like a totally new player after her season ending ACL rupture last year.

Sustained success isn’t far away for the Firebirds faithful. 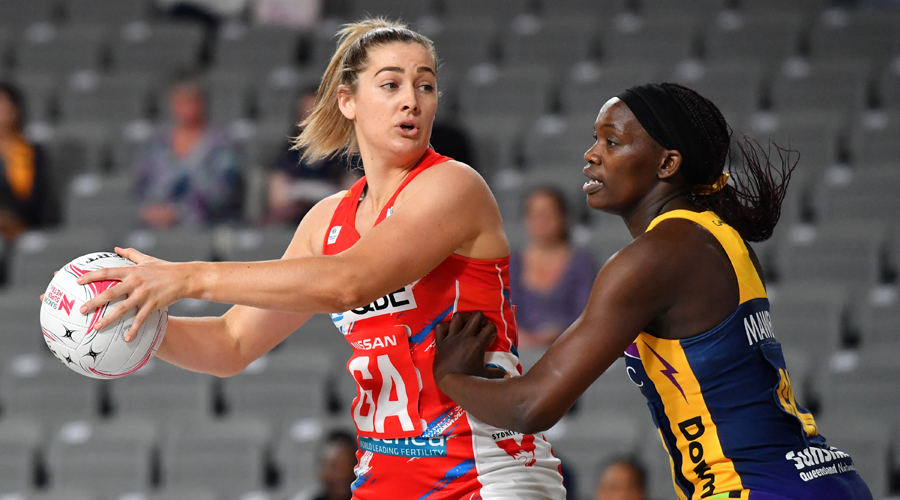 Everyone loves a Grand Final rematch and this one was particularly good.

Coming in, we knew it was going to be a hard-fought battle because these two teams match-up so well against each other.

The Lightning’s brand of defensive netball is the perfect foil for the Swifts free flowing, fast paced game plan. Goals were never going to come easy and winning was going to take a mighty effort.

And that’s exactly how it played out.

Lightning captain Laura Langman was incredibly important early, disrupting the Swifts midcourt run and giving her shooters plenty to work with. She ended the game with two intercepts, three gains and 30 feeds.

The Sunshine Coast went into the half time break with a three-point lead, but it was all NSW in the second half, outscoring the Lightning 32 points to 11 and running away with a seven-goal win.

Sarah Klau was awesome at Goal Keeper for the Swifts and her seven deflections and six gains were crucial in the win. She has quickly become one of the most disruptive defenders on the planet and her 50 deflections through the first seven rounds is the equal most in the competition.

Welcome to the Mannix show

Speaking of disruptive defenders, let’s talk about the incredible performance of Emily Mannix, who’s Melbourne Vixens came away with a hard fought seven-point win against the Thunderbirds to finish the round.

Mannix was everywhere. She ended up with eight interceptions, 12 gains, 10 deflections and a whopping 136 Nissan Net Points for the game and was centimetres away from a couple more of each.

And those turnovers proved to be more crucial than ever because the Thunderbirds were all over the Vixens from the opening centre pass.

Shamera Sterling was her normal mind-blowing self and put together a huge five intercept game herself. Her defensive sidekick Shadine Van Der Merwe played one of her best Super Netball games at Wing Defence and really made it difficult for the Vixens to establish circle edge.

But Melbourne showed why they are the ladder leaders and one of the early favourites to win it all. Goal assists league leader Liz Watson was impressive again and just always seems to make the right decision, even when everything else around her is collapsing.

Super Netball 2020 Round wrap Round 7