Round 8 is the split round, which means just four of our teams are in action this weekend. We break down the first two games of Round 8 in our weekly preview.

Round 8 not only gives the teams a chance to recharge the batteries, it also marks the first weekend of the second half of the 2021 season, meaning the focus shifts to how each team can grab one of those top four spots.

All eight teams have now played each other once and will now know what worked, and what didn’t, when they come up against each other for a second time.

We have just two games to talk about this weekend, so let’s get stuck in.

If this Round 8 clash between two of the biggest franchises in the sport ends up being as much fun as their Round 1 meeting was, then we’re in for some fireworks.

Of course, when these two met at Nissan Arena in May, we saw Super Netball’s first ever game decided in extra-time, with the Swifts coming away with the 69-66 win over the Firebirds.

Both teams will come into their second meeting smarting from disappointing Round 7 losses. The Swifts were ambushed by a Thunderbirds side keen to claim a big scalp in front of a packed Adelaide Entertainment Centre. And the Firebirds found out just how good the undefeated Fever are, going down by 10.

Sam Wallace, who scored 49-points from 49 shots in Round 1, has been on a tear this season and many have her tipped to dethrone Jhaniele Fowler as the MVP at the end of the season. It’s not just the volume of goals she’s scoring that has people liking her chances, it’s her reliability that sets her apart from the other big shooting targets in the comp. 286 goals from 296 shots for 295 total points scored. It’s 107-points less than Fowler through seven games, sure, but just ten misses? That efficiency is crucial when it comes to building pressure.

Penalties were a huge problem in Round 1 for the Firebirds, who racked up a concerning 95 that afternoon, and that continues to be the case a month and a half later. They average a combined 69.3 contact and obstruction penalties a game, by far the most in the league, meaning they play a lot of 6 vs 7 netball every game.

At the centre of all of that is how Sarah Klau and Maddy Turner, who have been on fire lately, can handle the three-headed scoring monster that is Romelda Aiken, Gretel Bueta and Tippah Dwan.

Service is key, so if the likes of Jemma Mi Mi, Lara Dunkley and Kim Ravillion can out-work the Swifts midcourt, the Firebirds could put up some serious points and stun their big rivals on their home court. 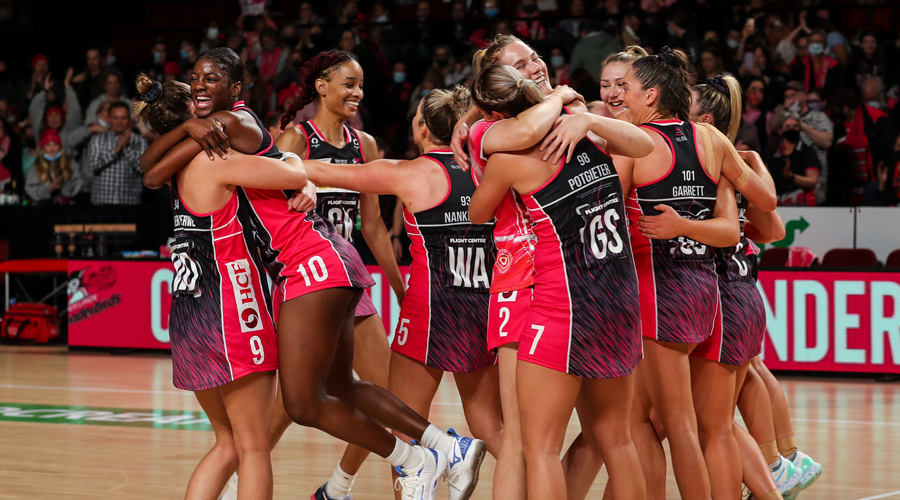 What a fascinating match this one, between two teams trending in opposite directions right now, promises to be.

The Adelaide Thunderbirds have a chance to do something they haven’t done since 2014 and that’s win three games straight after big wins over the Melbourne Vixens and NSW Swifts.

They’ll be trying to do that against a GIANTS team desperate to avoid something the franchise has never done before: Lose four games straight.

Thanks to a hot four and zero start, it’s not quite panic stations yet for the third placed GIANTS, but a loss to the building Thunderbirds and a Magpies win next weekend might see them slip out of the top four at round’s end.

It’s hard to say what has caused this run of poor performances from the GIANTS. Maybe the disjointed trip to Perth in Round 5 shook them up? Maybe the loss of Kiera Austin is starting to catch up to a shooting circle that has played almost every minute since midway through the second quarter of Round 1? Or maybe it’s the fact that they have come up against the three teams they currently share the top four against in those three losses?

On the other hand, a full team effort has been the spark behind this Thunderbirds hot streak. Lenize Potgieter and Georgie Horjus have settled into a groove and, with Potgieter’s consistency and Horjus’ creativity, are turning into one of the best attacking duos in the comp. Hannah Petty, Shadine van der Merwe and Maisie Nankivell have been taking it right up to the best midcourt units in the comp lately. And Shamera Sterling has been off the charts alongside Matilda Garrett.

So, with all that going on, how does this one go down?

When they met in Round 1, the GIANTS really outplayed the Thunderbirds from start to finish, coming away with a 14-point win. But the rattled Adelaide side that took to the court that day looks to be a thing of the past.

Sterling vs Harten is huge, as is Petty and Van Der Merwe’s upcoming matchup on the league’s feed leaders Jamie-Lee Price and Maddie Hay, and how Sam Poolman and April Brandley handle this unique Tbirds attack will be fun to watch.

But the battle between two of the country’s most exciting young midcourters in Amy Parmenter and Maisie Nankivell is the one to watch in this one. Parmenter is coming off a gigantic eight gain, six intercept, eight deflection, 94.5 Nissan Net Points game but will have her hands full against the reigning Rising Star of the year in Nankivell.

Round 8 Key Match Up: Swifts vs Firebirds

Round Preview Round 8 Super Netball 2021