The final game of Round 8 marked the end of the first month of the 2020 season. And what a way to bring it up!

What a weekend of netball!

We kicked off with the Australian Diamonds Head Coach announcement, followed that up with a top of the table clash for the ages, a great showing from the GIANTS. A one-point thriller and a massive Sunday afternoon upset.

Nine times out of ten, Grand Final rematches, big state derbies and Grand Final previews tend to let us down. It’s not that they are never good, they just rarely meet our expectations.

Saturday’s match between the top of the table Vixens and second place Swifts, billed as a potential Grand Final preview, was that one time out of ten where our lofty expectations are met.

A tight start leading to a tied game going into halftime, a stereotypically crucial “premiership quarter” in the third, a big comeback with less than two minutes remaining, then some clutch play to seal the deal for the winners.

Where do we even start here?

How about up forward for the Vixens where Mwai Kumwenda controlled the game from start to finish, scoring 46 points from 49 shots and providing Melbourne’s feeders with a reliable target for the entire 60 minutes?

How about the relentless defensive pressure from the Vixens, particularly from Kate Eddy and Player of the Match Jo Weston, who both stepped up when their team needed them and the game was on the line.

We know these Vixens are the real deal and we know the Swifts can take it right up to them. And we only have to wait another eight days before they go at it again.

Coming into season four, many predicted a tough year ahead for the Magpies and, unfortunately for the Collingwood faithful, those predictions look right on the money.

Losing one of the best midcourters in the world in Ash Brazill hurts, replacing one of the best to ever play the Goal Attack position in Nat Medhurst is an almost impossible task and losing an international calibre defender in April Brandley is always going to sting.

Throw in having two of your best players in Madi and Kelsey Browne both returning from serious knee injuries and a condensed season and you’re fighting an uphill battle.

And that’s really starting to show after eight rounds.

Full credit has to go to a GIANTS team who are getting good at fixing problems mid-match then putting the pedal to the metal.

Last round, against an undersized Firebirds defence, it was the Caitlin Bassett show. This week, against one of the best Keepers in the world in Geva Mentor, it was the more agile shooting circle of Kiera Austin and Jo Harten who got the job done.

The week the GIANTS get that combination right from the opening pass, look out!

Until then, they’ll just keep going into the quarter time huddle trailing, something they’ve done five times out of eight so far this year. 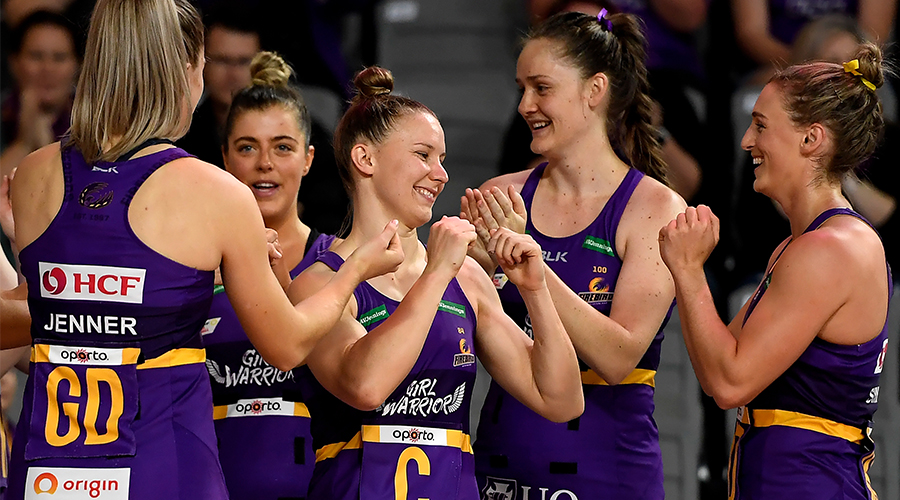 Are the Firebirds the new hoodoo team of the league?

They’ve been a completely different team since their Round 2 loss to the Vixens and, although their record since has been a just fine two wins, three losses and a draw, they have been ultra-competitive in every match since.

So where has this change come from?

Let’s start with Mahalia Cassidy, who is quietly putting together a season worthy of some sort of Comeback Player of the Year Award. We’re currently petitioning for one to be created just so she wins it.

Tippah Dwan has been incredible, never missing a beat since coming in to replace Gretel Bueta at Goal Attack, and her Suncorp Super Shot on the third quarter buzzer and oh so calm shot with 15 seconds to go to seal the game were highlights for her.

For the Thunderbirds, this is one that got away.

The final two minutes will not make for easy watching for the Adelaide players and fans and they’ll be hoping to make amends on Wednesday when they take on the Lightning.

The new boss flexes her muscles

After the biggest day of her professional career on Saturday, one might have expected Fever Head Coach Stacey Marinkovich and her team to be a little off their game on Sunday against the Lightning.

One would have been wrong.

The new Australian Diamonds Head Coach and her Fever absolutely belted the Sunshine Coast Lightning, and not just in the attack end where they put up a record tying 80-points.

Courtney Bruce and Stacey Francis dominated the Lightning shooters all day, finishing with four interceptions and a massive 16 gains between them. As a defensive unit, they were able to hold the Lightning to just 56 points, their lowest goals against total for the season.

Verity Charles was simply unstoppable through the midcourt and led all players with 41 feeds and 26 goal assists, numbers you rarely ever see against the Lightning’s relentless midcourt.

And Alice-Teague Neeld played the perfect game at Goal Attack, racking up goal assists (21) and feeds (30) while also keeping the defence honest by hitting her shots.

It capped off a brilliant weekend for Marinkovich. Announced as the Diamonds Head on Saturday then hand the Lightning their biggest defeat in franchise history on Sunday.