With coronavirus wreaking havoc across the country, the eight Super Netball sides have had to travel to Melbourne and Adelaide to get Round 9 done. Here's all you need to know ahead of a very different looking Round 9.

It’s been a rollercoaster of a season so far and Round 9 certainly isn’t any different. With multiple states across Australia being forced into lockdown during the week, all eight teams have made their way to Melbourne and Adelaide for the upcoming weekend of Netball.

Firstly, I must say a big thank you to all teams for their patience and sacrifice which has allowed Round 9 to go ahead. It is a considerable commitment to make, and everyone involved with the league, especially supporters, are grateful for your sacrifice.

Coming off the split round, we are back to a Netball packed weekend, with four very important games lined up. Here is all you need to know for Round 9!

The Melbourne Vixens take on the red-hot Sunshine Coast Lightning in a first vs last match-up at John Cain Arena. This will mark the first time in six weeks that the Vixens have been able to play at home due to the Melbourne lockdown, with their last game at John Cain Arena played way back in Round 4.

You would think being back at home would be welcome news for the Vixens, however, they are yet to win a game in Melbourne in 2021; and currently hold an average losing margin of 9.8 across all home games. And to make matters worse, the Lightning are currently undefeated in away games this season with an average winning margin of 5.8.

The Vixens do hold slight leverage over the Lightning, winning three of the past four encounters between the two sides, with an average winning margin of ten. However, these are two entirely different sides than in previous years, with the Lightning currently sitting a game clear on top of the ladder.

Considering they haven’t played since June 12th due to the split round and their matchup against the Fever being postponed last weekend, Melbourne should be well-rested. The question will be whether the Vixens will come out fresh and energised to start the game or will their touch be off due to the long break? The Vixens will need to ensure they come out with intent, considering they have only won one first quarter for the entire season.

The Lightning may come into this game with heavy legs after their bruising extra time victory against the Magpies last round. In one of the games of the season, Cara Koenen was enormous for her side, ending the game with an incredible 117 Nissan Net Points (the second highest recorded this season).

Karla Pretorius was the difference last time these two teams went head-to-head, earning herself six deflections, five gains, three pick-ups and two interceptions. Pretorius, who is 5th in the league for interceptions, could prove to be a headache again for her opposition, with the Vixens currently last in terms of total points per game with 52.

The Vixens may look to take their chances from Super Shot territory this week, as they currently have doubled the Lightning in Super Shot attempts in 2021. Back in Round 2 when these two teams went at it, the Vixens took ten Super Shots to two, however eventually suffered a five-point defeat.

This game is looking to follow the same suit, with the Lightning looking the stronger side. If results go their way, Sunshine Coast could see themselves two games ahead on top of the ladder with only 5 Rounds to go. 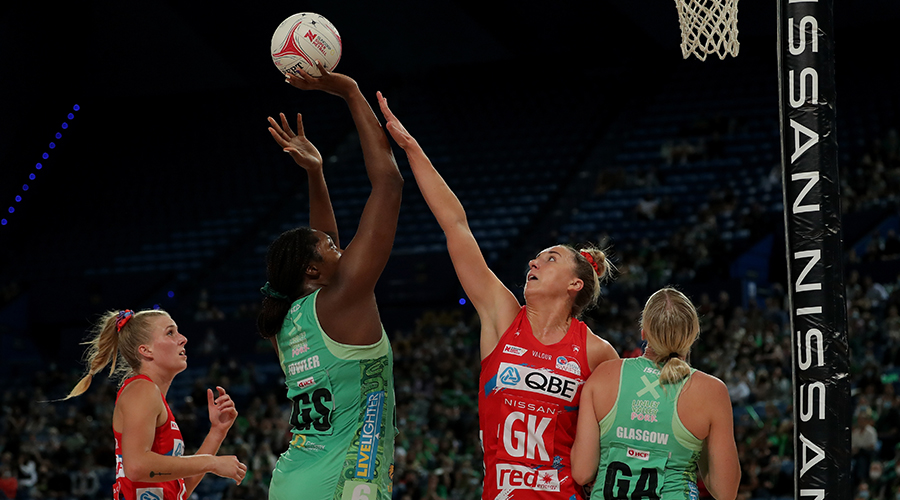 This is looking like the game of the round, with the 3rd placed Swifts taking on the 4th placed Fever.

The top four is starting to take shape. If the Swifts can take home the points in this encounter, they will move two games clear of the Fever. Conversely, if the Fever can get the job done, they will jump the Swifts due to their higher percentage.

The Fever have won the last three games against the Swifts by an average of seven points and will be hungry to make it four on the trot.

Swifts Captain Maddy Proud plays her 100th national league game this weekend; and is coming off one of the best individual games of the season last round. Proud scored the highest Nissan Net Points for 2021, with an incredible 118.5 — including 33 feeds, 19 goal assists, two gains, two interceptions and only two turnovers.

The Swifts will need to pay close attention to Verity Charles, with the Fever WA currently sixth in total goal assists this season. Interestingly, back in Round 2 when these two teams clashed, Charles was benched in the second quarter with a game low -22.5 Nissan Net Points. Verity will be looking to make amends after finding some hot form in recent weeks.

This game could come down to who takes better control of the ball and manages to reduce turnovers. The Swifts currently have recorded 40 more turnovers this season than the Fever; and will need to limit unforced turnovers if they are to win this match.

The key to victory for NSW will be nullifying the Fever in the second half. The Fever have only lost one second half quarter for the entire season; and currently hold a +55 in second half points against their opposition. Considering the Fever are yet to lose a last quarter in 2021, the Swifts must ensure they make the most of the opening 30 minutes. And, given the Fever have had two weeks off, they should be fitter than ever and poised to run over the opposition.

Jhaniele Fowler has had as dominant of a season as possible, leading the league in scoring and total Nissan Net Points, where she has 116 more than 2nd place with a game still in hand. Sarah Klau will have a huge task ahead of her to limit Fowler’s production, with the Fever GS attempting 60 shots back in their Round 2 encounter.

This game has all the makings of a classic and certainly not one to be missed! 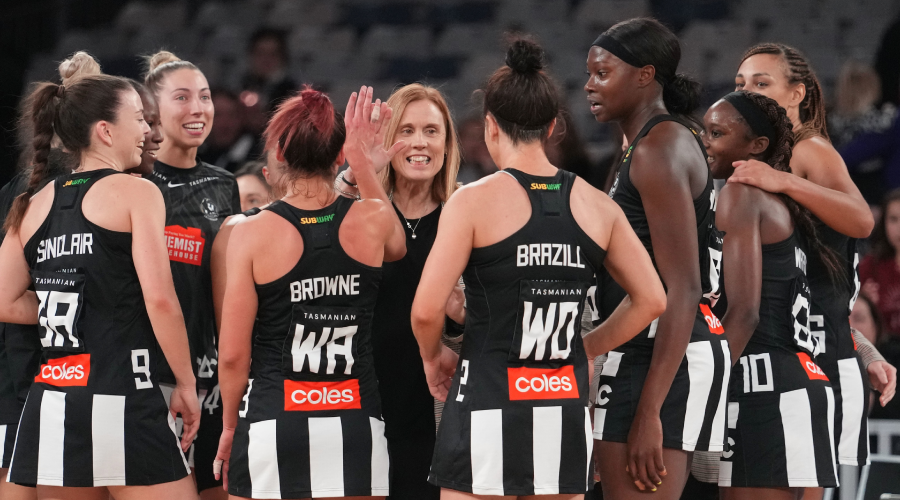 The second match-up in Sunday’s triple header is between 5th and 7th place on the ladder, with this being the only game that isn’t being played in Melbourne this weekend. The Magpies have a had a rough time of it recently, having not played a game in Melbourne since Round 3.

The Thunderbirds have had the edge over the Magpies in recent years, winning six of their past nine encounters (including one draw).

This is a must win game for the Magpies, who could fall two games out of the top four and see their finals hopes slip away. The Magpies suffered a heartbreaking loss in extra time to the ladder leading Lightning last weekend. Collingwood had every chance to win and will take great confidence into Round 9 knowing they can match it with the best.

The Thunderbirds were blown away by a dominant GIANTS outfit in Round 8, recording the lowest total points of the season with 41. Adelaide currently has the greatest number of turnovers, highest total possession changes and the second lowest centre pass to goal rate in the league. This shows that the Thunderbirds are at times careless with the ball and lack a consistent connection between mid-court and their shooters. The key to the Thunderbirds winning will be their ability to keep possession of the ball and turn that into shots on goal. Especially considering the Magpies have the second highest number of goals from unforced turnovers in the league.

Despite the Thunderbirds record, they have been building some solid form coming into Round 9, knocking off the Vixens and the Swifts in consecutive weeks. If they can put aside their big loss to the GIANTS, the Thunderbirds have the capability to make it three wins from four games.

The key matchup to watch closely will be Shimona Nelson and Shamera Sterling. The last time these two teams played each other, Nelson got the edge over her Jamaican compatriot, shooting at 95% and helping the Magpies to a four-point win.

They're the best goal keepers in the world at the moment. When you look at the stats, it's almost impossible to separate them. They're a shooters worst nightmare! 😤

Which player will get more intercepts and deflections in round 9?#EverythingIsPossible pic.twitter.com/ftcBD0ZgBF

Nelson is currently leading the competition in bad hands/catch turnovers. The Magpies GS prefers to body out her opponents and use her height to catch high feeds. So, if Sterling can disrupt Nelson’s positioning inside the circle by playing off her body, she might be able to cause some important turnovers for the Thunderbirds.

Kelsey Browne will also be one to watch, as she recorded a match-high 25 assists last time out. Browne has developed a strong connection with Nelson as the season has unfolded; and could prove to be the difference in the end.

It was a scrappy and fast-paced game back in Round 3; and this is looking likely to follow suit. However, those type of games usually tend to be incredibly exciting, so be sure to tune into this one! 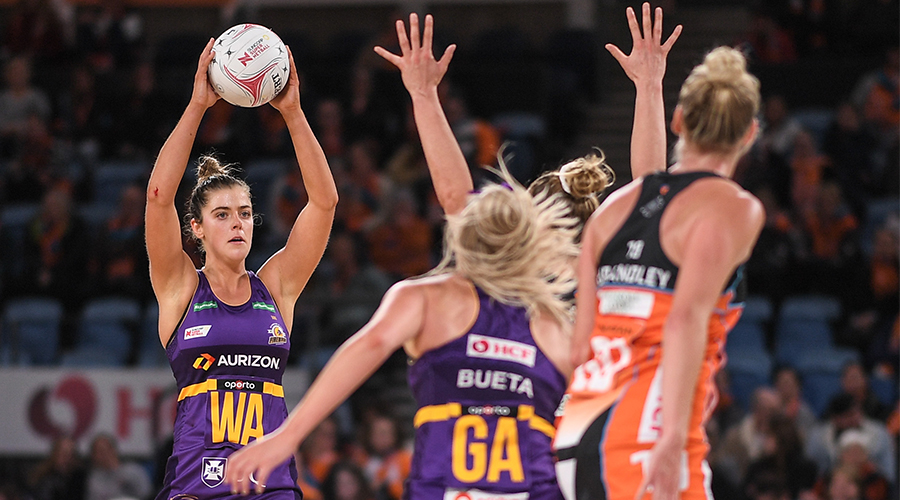 The final game in Sunday’s triple header is between the rampaging GIANTS and the inconsistent Firebirds. As we head towards crunch time of the season, this match-up has big implications on the season.

Top spot is up for grabs; however, the Vixens will need to cause one of the biggest upsets of the season if the GIANTS are to jump the Lightning into first position on the ladder. The GIANTS can move a game clear in 2nd spot, if the Fever can knock off the Swifts, and face the Magpies and Vixens in Rounds 10 and 11 respectively, setting up a big month of Netball for the GIANTS.

The Firebirds have only won one game in the previous six rounds and will be desperate to get back onto the winners list. The key to winning this game will be to nullify their oppositions opening quarter. The GIANTS have only lost one first quarter for the entire season and that was to the Swifts in Round 6 by just the one point.

This game will be played in neutral territory at John Cain Arena due to the current COVID restrictions interstate. This will be unusual circumstances for both teams, who have only played a combined total of one game in Melbourne this season. This a big blow to the Firebirds who would have welcomed the home game against red-hot GIANTS outfit. The Firebirds have only won 25% of away games in 2021, compared to the GIANTS who have a winning average of nine-points in their away games this season.

It will be the battle of the Centre position, with Jamie-Lee Price and Kim Ravaillion both in career best form. Price and Ravaillion are 2nd and 6th, respectively, in total Nissan Net Points for the season to date. The two are goal assist machines, with only the one assist separating the two in 2021. Price took home the bragging rights in their Round 3 clash, with the GIANTS winning by seven-points.

Super Shots should also play a big role in this one, with both teams 1st and 2nd for total attempts from two-point territory. The match could be decided on who can makes the most of their chances, as both sides are shooting under 50% from Super Shot range. Jo Harten leads the way in two-point goals scored for the season, so the Firebirds will need to be aware of the GIANTS’ strategy in the last five-minutes of each quarter.

Round 9 Round Preview Super Netball 2021