For the most part, Round 9 went exactly to plan for the favourites. But that doesn't mean it didn't throw up any stories for us to talk about in our Round 9 wrap.

Another round of the 2020 season done and dusted and this one went pretty much to plan for the favourites.

The top four sides got the job done against their bottom four opponents, and pretty comfortably in the end.

But that doesn’t mean we don’t have some huge storylines to talk about in our Round 9 wrap!

Is the MVP conversation a two-horse race?

The Melbourne Vixens looked every bit the ladder leading Grand Final favourites when they calmly dispatched the GIANTS on Tuesday night.

They had all the answers in attack, where Mwai Kumwenda is in career best form, that defence is causing turnovers at an alarming rate and their midcourt is dominating all three thirds.

Which brings us to Liz Watson.

Is there another player in the league that’s played better than Liz Watson through the first nine rounds?

These three stats tell the story of a player who is by far the best offensive midcourter in the competition; a league leading 236 goal assists, 101 more circle feeds than anyone else with 385; and 181 centre pass receives (second most).

Besides Jhaniele Fowler, who is on top of every shooting stat we have, no player is dominating the game like Watson.

And her 48 feed, 32 assist and 30 centre pass receives performance against a solid GIANTS defence was probably her best performance yet.

And it wasn’t just the numbers that defined this game for Watson. She plays her best netball when the game is in the balance and never seems to make the wrong decision with the ball in her hands.

It hasn’t been pretty for the Swifts, but they are going out there two times a week and getting the job done.

Head Coach Briony will be thrilled with the play out of Sarah Klau, who has taken her game to a whole new level this season, and will be loving the production she’s getting out of her Captain Maddy Proud, who looks like she’s back to 100% after her ACL injury last year.

One area of the court where they do seem to be a little out of sorts is their scoring efficiency, particularly when they have the centre pass.

Their Centre Pass Goal Percentage is a fourth best 67.5%, with just the Vixens, Fever and Lightning scoring from their centre pass more often than them. Problem is, considering we’re nearing the pointy end of the season, those are not the four teams you want to have a sizable advantage over you.

Collingwood should come out of this one feeling ok about their performance, especially after the Swifts jumped out to a seven point lead at quarter time. The Magpies took it right up to the reigning premiers in the second and third, despite being without their two midcourt stars Kelsey and Madi Browne.

And while we’re on the Browne sisters, we should absolutely take this opportunity to congratulate Madi on her amazing career. The speed and creativity she brought to the game will be missed.

Madi Browne, one of the greats of our game, has called time on her career.

We wish you all the best with your next venture Madi, thanks for everything you gave netball, on and off the court.

If the performance of Karla Pretorius and Shamera Sterling last night didn’t have you writing GK or GD on all of your white t-shirts, then there’s something wrong with you.

Same goes if you weren’t shaking your fists at the netball gods after Sterling went down with an injury late in the game.

These two were having a field day out there and punishing two attack ends that were as wasteful and untidy as we’ve seen so far this season.

Pretorius finished the night with eight gains, six interceptions, three deflections and a rebound to help her Lightning come away with a six point win.

Up the other end of the court, Sterling putting on a clinic at Goal Keeper, racking up ten gains, five interceptions, five deflections and three of the nicest rebounds before being helped from the court in the late stages of the match.

We’re still waiting for word from the Adelaide doctors, but we’re sure we speak for everyone when we say fingers crossed it’s not as serious as it seemed.

In the end it was a gutty win by the Lightning, who now have an opportunity to lock-up their place in the finals with games against the fifth place GIANTS and fourth place Fever in the next two rounds. 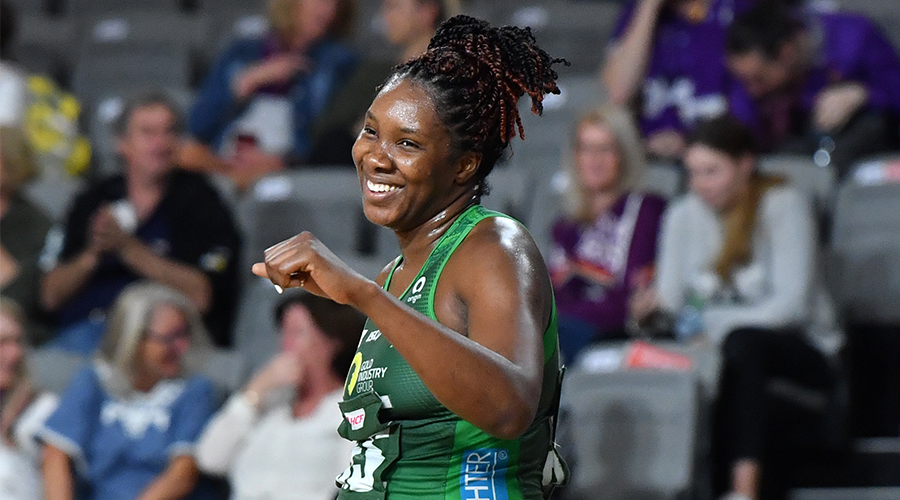 If everything is clicking, the West Coast Fever are pretty much unstoppable. We know, that’s a big if.

Jhaniele Fowler is averaging an outrageous 55 points per game so far this season, which means she’s on track for another 750 point season. She poured in 63 in last night’s win over the Firebirds.

Verity Charles is having a massive season lobbing passes into her and when Alice Teague-Neeld can draw a defender by hitting a few shots early, it makes for a rough day at the office for defenders playing against them.

After missing two games early, Courtney Bruce’s last three games have been off the charts. Get a load of these stats; 29 gains, 15 interceptions, 15 deflections and nine rebounds. In three games!

Considering the Fever score off 33.9% of the turnovers they create, the second-best percentage in the league, having a player averaging almost ten gains a game is massive.

Losing Ingrid Colyer was heartbreaking and will test their midcourt depth, an area probably considered their biggest weakness. Look for Jess Anstiss to play more Centre, Charles to spend more time at Wing Attack and Stacey Francis to fill that Wing Defence position.

It’s all there for the Fever, but the main problem the last two years has been putting it all together consistently.

A win on Saturday against the ladder leading Vixens would be a massive confidence boost and silence the doubters.

Round 9 Round wrap Super Netball 2020