In what was a perfect welcome to their newly revamped home venue at USC Stadium, the Lightning trailed at half-time but roared clear in the second half to win by 11 goals, 72-61.

The GIANTS ground their way to a three-goal lead in a pulsating first half, earning two bonus points along the way, but the Lightning dialled up the pressure at both ends from the opening seconds of the third quarter, and with World Championships spots potential on the line, the GIANTS were found wanting.

The Lightning piled on an incredible 25 goals for the quarter, with Peace Proscovia (43 goals from 48 attempts) helping herself to 20 of them, as the GIANTS lost the reins in defence and saw the game slip away.

The Lightning finished the quarter in front 55-47, with goal defence and Nissan MVP Karla Pretorius holding Jo Harten to five goals for the quarter and prompting GIANTS coach Julie Fitzgerald to pull Harten to the bench, with Kiera Austin inserted at goal attack in a bid to turn things around.

But it was to no avail as the Lightning picked up where they left off, and increased their advantage further after substituting Cara Koenen into goal shooter for Proscovia halfway through the term.

The second-half blowout didn’t do justice to the enthralling contest fans were treated to in the opening two quarters.

Both teams led for periods throughout the half, with the Giants getting the early jump and leading by as many as three goals, before the Lightning hit back to square things up.

It took a Jo Harten goal on the final whistle to separate the two teams, with the GIANTS leading 17-16 and taking the first bonus point.

A run of four GIANTS goals midway through the second quarter saw them open up a four-goal lead, and from there the teams traded goals, with a handful of late Lightning goals not enough to stop the GIANTS taking the second bonus point and a 33-30 lead at the long break. 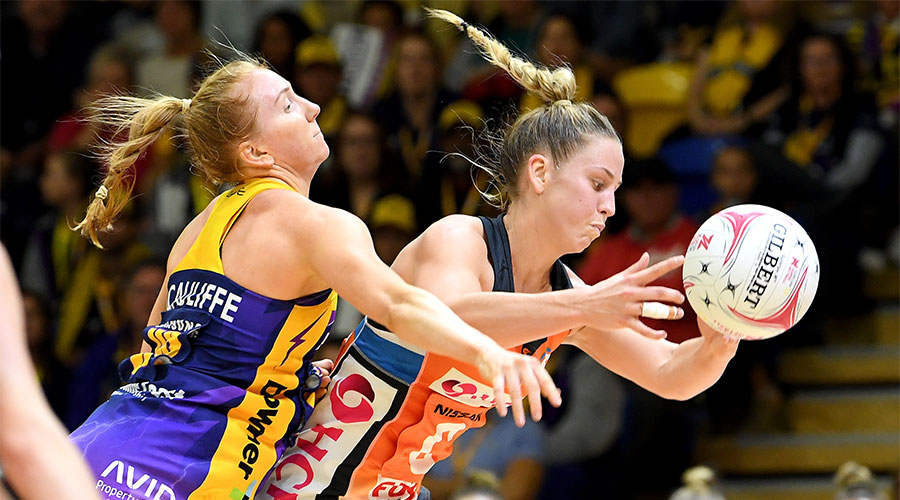 It didn’t take long for Pretorius to inspire the troops in the second half, coming up with a turnover inside the first two minutes to shift the momentum in the Lightning’s favour.

They chewed up the deficit with seven of the first nine goals, grabbing a two-goal lead that soon became three and then four.

The GIANTS turned to debutant Teigan O’Shannessy at goal keeper, replacing Sam Poolman, but the Lightning continued the onslaught, scoring five consecutive goals late in the quarter as Steph Wood (21 from 24) and the midcourt of Laura Langman and Laura Scherian tore holes in the GIANTS defence.