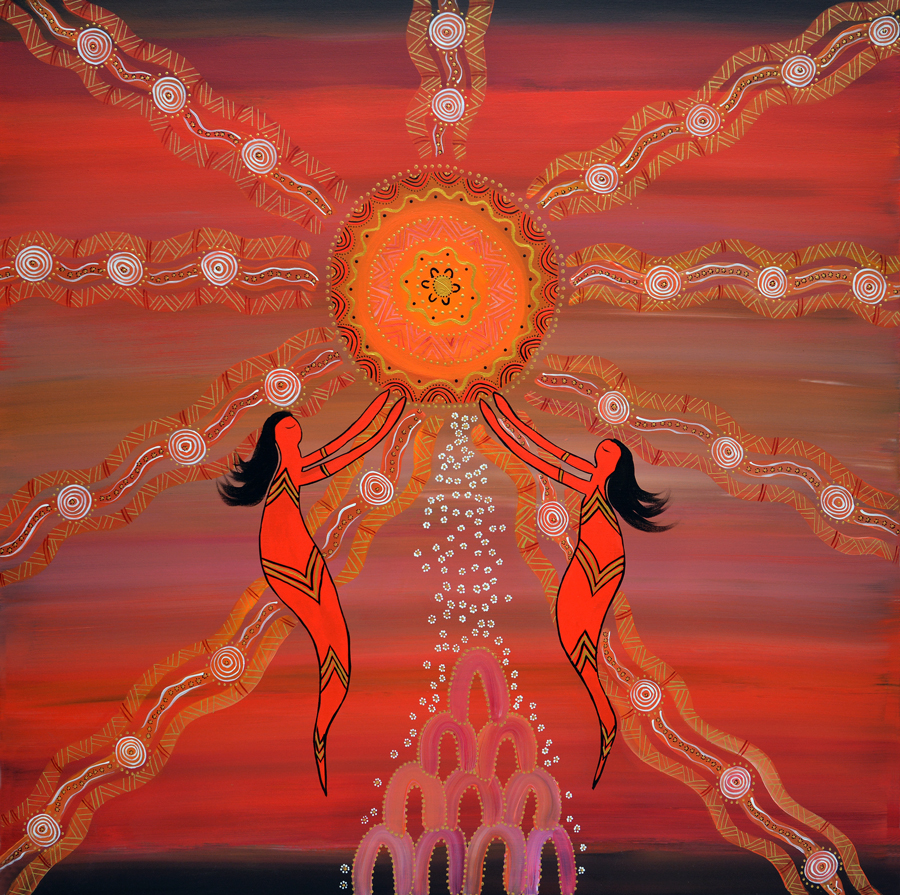 In memory of my late Aunty Hyllus Maris, fierce warrior winyar (woman) of the Yorta-Yorta and Wurundjeri peoples, activist, founder of Worawa Aboriginal College, the author of Women of the Sun and the deliverer of its spiritual dreaming story. She believed strongly in equality and in educating Aboriginal children, nourishing raw sporting talent with a determination and guardianship likened to that of queens.

As with the sun, Netball Australia spans across country canvassing eucalypt forests and red ochre sands, saltwater mangroves and deep violet ranges. Netball Australia’s commitment to reach remote Aboriginal communities to provide access and opportunities to excel in the game radiates like the sun’s rays touching the furthest corners; the netball community is far spread and inclusive of all females.

It is represented in the core of the sun, the gathering circle for ceremony – netball.

The core represents Netball Australia’s ongoing commitment to work with the Aboriginal community.

Water is represented by the gold wavy circles within the sun’s orb, mountains and valleys are represented in the light pink chevrons – these signify the differing journeys we make over country to join in tanderrum, a celebration of clans coming together – of teams, communities and cultures participating in the sport.

Gold and scarlet mounds represent homelands and families – the Elders, the knowledge holders, the speakers and teachers of culture educating and sharing the old ways amongst the netball community.

They are the bridges of wisdom, they represent reconciliation – ongoing commitment to resolve barriers within the sport to allow a strong, prosperous future.

Journey-track circles lay within the beams of the sun. They signify the journey from the beginning of netball careers to elite athleticism, they signify journeys in skill development and health and fitness – the platform given through ongoing support and opportunity from Netball Australia.

Red ochre painted women represent Women of the Sun, holders of fire and power that light the day sky. They are dressed for ceremony in the fiery red-orange glow. They signify strength and inspiration to all girls and women; they show leadership – they are warrior women who give rise to all females.

Women all around the country are represented in the tiered ‘n’ shapes. This is the foundation of team spirit and the unbreakable bond shared between sisterhood aspiring to success.

The sun’s power source flows onto the tower of women in the form of white sunbeams, ancestral stars – they signify equality, they represent opportunities from Netball Australia and its deep connection to Aboriginal girls and women. It is the solid commitment to build on the community relationship and to encourage all to excel in the sport.