The Sunshine Coast Lightning come into the 2022 season with the most changed list in the competition. Can Head Coach Kylee Byrne bring it all together continue the club's top four streak?

Things were looking like business as usual for the Lightning in 2021 when they came into their Round 9 clash against the struggling Vixens with a very healthy 6-2 record.

Five straight Mwai Kumwenda goals sealed a miraculous Melbourne win, sparked a 2-4 run to close the Lightning regular season, and an eight-point loss to the Fever in the Minor-Semi Final ended it for good.

It’s fair to say that 2022 is the start of a new era for the Sunshine Coast Lightning.

That new era begins with fixture that should allow this new look squad to build some chemistry on the road early, settle into the season with a well-timed mid-season home stand before the year ends with three away games in the final month.

The key for Kylee Byrne and the Lightning is finding a way to somehow replace the enormous hole left by Pretorius and Maweni in defence and while making sure the inexperienced depth players are contributing when called upon. 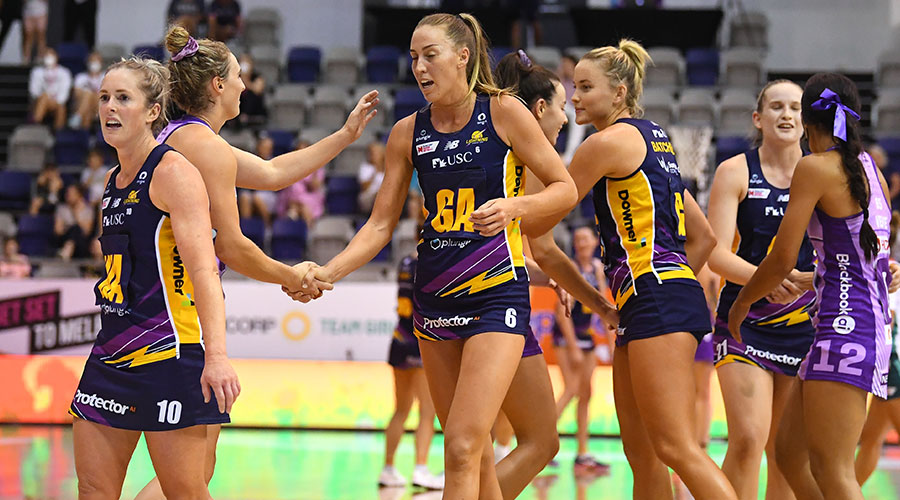 There are some big names in this predicted starting seven, but there are plenty of question marks throughout this list as a whole.

The first being at goal keeper, where former Vixen Kadie-Ann Dehaney gets the nod to start. Dehaney has proven she can have an impact on a game off the bench and this figures to be her first opportunity to start at this level. She should be solid, if not great.

The big question mark for us here is with fellow new recruit Tara Hinchliffe, who has been rehabbing a ruptured ACL but looks set to return Round 1. Training partner Bridey Condren impressed at the Suncorp Team Girls Cup and should have done enough to earn a call-up, if Hinchliffe needs more time to get back to 100%.

Kate Walsh (nee Shimmin) is coming off a really strong 2021 season, where she made the most of her time on court, wherever she played. She’s a handy player to have and can be called upon to play any role.

Maddie Hinchliffe has earned herself a full time senior contract with the club and should slot straight into the vacant WD position. We haven’t seen enough of Hinchliffe at this level to know the impact she is going to have, but can’t wait to see her get a run with her sister in the Lightning dress..

Another former Firebird, Mahalia Cassidy has developed into one of the best center’s in the league since landing at the Lightning. Fast, strong and clever, Cassidy continues the Lightning tradition of high-class centers this club has always been known for.

The Lightning have a stud at wing attack in Laura Scherian, who is always near the top of the league in feeds, goal assists and centre pass receives. Her continued high-performance will be crucial for the Lightning in 2022.

Captain Steph Wood will lead the side for the first time in her career in 2022 and is coming off a strong Quad Series with the Diamonds in England. This young side is going to be tested this season and it will be up to Wood to steady the ship, on and off the court.

Wood is joined by her Diamonds teammate Cara Koenen at GS, who continues to develop into the true focal point shooter she has been earmarked to become for some time. Koenen finished in the top ten for goals scored in 2021 and should benefit from having young gun Reilley Batcheldor coming off the bench to mix things up in attack.

They’ll know exactly where their at after a Round 1 trip to Perth to take on the Fever. It’s the longest trip in the competition so Round 1 is probably a great time for it to land, with the adrenaline high ahead of the new season.

After that it’s back home for the Queensland Derby to take on a Firebirds side that swept them in 2021. The Lightning will be out to remedy that situation in Round 2.

The three games in six day run starts in Adelaide, makes it way to Melbourne for Wednesday night match against the Magpies before wrapping up on Saturday afternoon at home vs the Vixens.

The opening half of the season finishes with back-to-back matches against the two NSW juggernauts, the Swifts in Round 6 at Ken Rosewall and the GIANTS at home.

That GIANTS match kicks-off a four-game home stand, with the Thunderbirds, Fever and Swifts all following the GIANTS in Round 8, 9 and 10. This four game run is crucial in our books. Three of these matches are against 2021 finalists and the other is against a Tbirds side we’re tipping to be a tough beat this season. If they can’t come away with at least two wins, they could be in danger of dropping off the pace of the top four with a month to go.

That final month starts down the highway in Brisbane against the Firebirds before they jump on a jet down to Melbourne for a big game against the Vixens.

They’ll host the Magpies on Sunday afternoon for a big Indigenous Round clash at USC Stadium then wrap up the regular season against the GIANTS at KRA.

We hate doing this, but someone has to cop the wooden spoon pre-season prediction so that their fans can rub it in our faces when they inevitably go on to have a great season. This year, it’s the Lightning.

We just have too many questions in that defensive end and wonder whether their depth players are ready to mix it with a list overflowing with unbelievable talent.

If Tara Hinchliffe can bounce back from a tough ACL injury, Kadie-Ann Dehaney is ready for the big time and Maddie Hinchliffe steps up and proves she’s got what it takes to shut down the best mids in the comp, the Lightning will be fine.

But almost every team in the competition got better or solidified their lists in the off-season, we’re not sure that’s the case with the Lightning.