The NSW Swifts will remain on top of the Suncorp Super Netball ladder for another round after a 68 to 52 win over the Collingwood Magpies today in Sydney.

The Swifts started strong with defenders Sarah Klau and Maddy Turner making life very difficult for the Magpies attack end. The Swifts capitalised on these early opportunities and took a 5-1 lead within minutes.

However, it didn’t take long for the Magpies to find their feet and get the scores back to even, and it then went goal-for-goal for much of the first quarter.

Swifts vice-captain Paige Hadley immediately took a commanding role in the midcourt demonstrating why she received a call-up to the Samsung Diamonds Netball World Cup team.

Shimona Nelson was once again a pillar of strength under the Magpies post, providing an easy target for midcourters Kelsey Browne and Kim Ravaillion to feed into, shooting at 100% (12/12) in the first.

It was the Swifts who were able to break away and take a three-goal lead into the first break, 17 to 14.

The Swifts then came out firing in the second quarter, stretching their lead out to nine within five minutes and the Magpies having to call a time-out to break the Swifts’ run of momentum.

Sam Wallace was unstoppable in the Swifts goal ring, shooting at 94% (31/33) in the first half and being fed well by an agile Helen Housby who provided the movement and space in the ring. 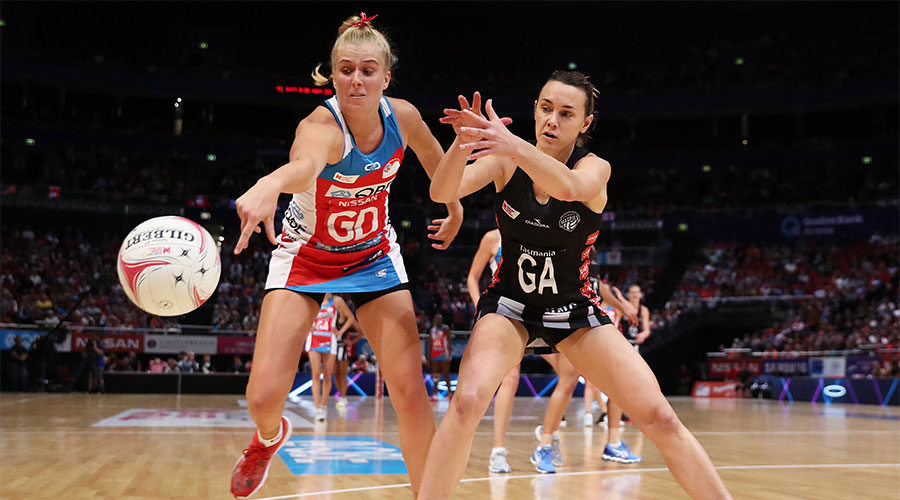 The Magpies were left looking for answers with coach Rob Wright calling a second time-out to make positional changes right across court, bringing on new recruit Kimiora Poi into centre for her Suncorp Super Netball debut, as well as Gabi Sinclair in goals and Matilda Garrett in defence.

The Swifts went on to win the second quarter and stretch their lead out to eight goals going into half time, 36 to 28.

The Swifts again lifted their defensive intensity in the third quarter, especially in the midcourt, making sure they had hands over everything and making it very difficult for the Magpies to transition into their attack end.

Sarah Klau will have silenced any doubts about her Samsung Diamonds World Cup selection after her performance today, winning the Nissan Player of the Match, sticking to Nelson like glue, taking four key intercepts for the match and causing Magpies attacking errors with her strong defensive pressure.

The Swifts claimed their third straight bonus point at three quarter time, stretching their lead out to 11 and setting themselves up well for the final term.

There were clear frustrations by the Magpies all over the court throughout the last quarter and goal keeping superstar Geva Mentor was brought to the sideline half way through the last.

The Swifts didn’t take their foot off the accelerator in the final quarter, extending their lead out to 16 to finish the match comfortably with all available bonus points in their hands at the final siren.