The Melbourne Vixens have claimed their fourth win of the Suncorp Super Netball season claiming a convincing 62 to 52 victory against the Sunshine Coast Lightning at USC Stadium.

It was the clash of the top of the table with Lightning sitting second on the ladder with four wins and the Vixens third with three wins and a draw, and both teams were out to secure that top spot.

The Lightning took early control of the match with captain Laura Langman forcing several early turnovers in her 200th national league match and her shooters in Steph Wood and Peace Proscovia capitalised well.

The Vixens attack end was congested early and Liz Watson and captain Kate Moloney struggled to find the space to feed into their goal circle with Lightning defenders Karla Pretorius and Phumza Maweni playing a physical and tight brand of netball from the outset.

The Vixens however fought back late in the first quarter, shooting the final 10 goals of the term to go into the break leading 16 to 13.

This form was continued early in the second quarter with the Vixens taking a convincing seven-goal lead half way through, forcing the Lightning to change up their attacking structure by bringing on Cara Koenen into goal shooter for Proscovia. 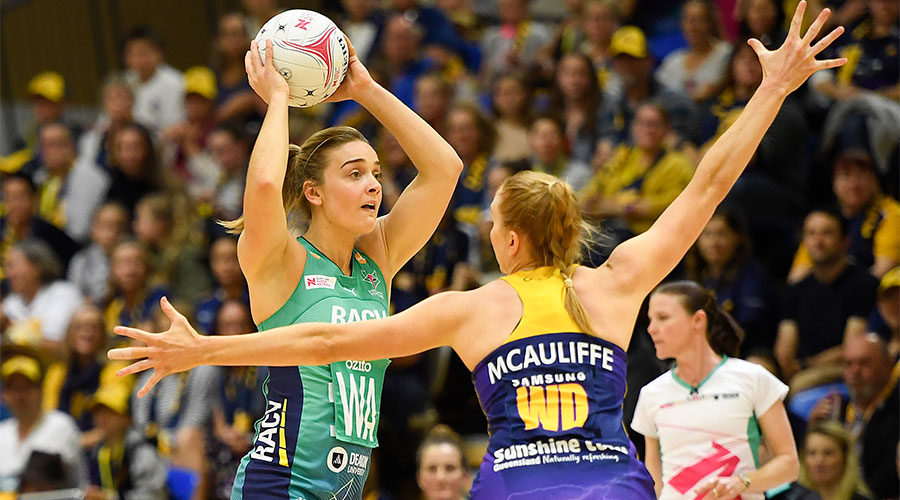 Vixens’ Caitlin Thwaites showed why she has been given the nod by Samsung Diamonds selectors earlier this week, shooting at 90% (33/37) and using her body well in the goal circle right throughout the match.

Despite the changes, Lightning still couldn’t find answers in their attack end with Vixens’ wing defender Renae Ingles winning a Nissan Player of the Match nod for her efforts on the ring and Jo Weston and Emily Mannix working overtime in the circle.

The Vixens capitalised well on this defensive pressure to take a seven-goal lead into half-time, 32-25.

The Vixens midcourt were too strong however, making their transition down the court look like a training drill on several occasions and the Lightning again were forced to change up their attack end, moving Steph Wood from goal attack to wing attack, Koenen to GA and Proscovia back in goal shooter.

The Vixens extended their lead yet again to end the third quarter up by 13, 48-35.

The Lightning were determined to claim the final bonus point of the match and held strong, particularly in their attack end with much more movement taking place in the goal ring, making it easy for wing attack Laura Scherian and Langman to feed in.

The strong finish saw the Lightning reduce the final margin to 10 and also win the quarter, but the Vixens lead was too extensive and the finished the match on top, even while resting Thwaites and Mannix for much of the final quarter.