The first Round Wrap of 2021 breaks down the opening weekend of the season, including the massive Grand Final rematch and the first ever Super Netball match decided in extra time.

After a season filled with near-empty stadiums, midweek games and uncertainty, how good was it to have the SSN back and firing over the weekend.

Sure, we had a few blowouts and some funky stuff going on with the clock in our first ever overtime match, but seeing huge crowds cheering on our favourite athletes was an incredibly exciting thing to be a part of.

So, let’s get stuck into our first Round Wrap of the 2021 season!

I tell you what, if West Coast can keep playing the way they did on Saturday against the Vixens, teams should fear the Fever.

For the first time since Nat Medhurst left the club, the Fever looked like a team with multiple avenues to goal. Which is a big considering we all know that if you can slow down Jhaniele’s scoring, you can shut down the Fever.

But that’s not what happened on Saturday.

I’m a big fan of Alice Teague-Neeld and I love her play as a creative GA who can work Jhaniele open. But when she’s not on, she’s not on. Which is where having a great pure scorer on the bench in new recruit Sasha Glasgow should change everything for the Fever.

If a team can put the clamps on Jhaniele and Teague-Neeld isn’t giving them the secondary scoring they need, get Glasgow in there.

Perfect example came during the third quarter on Saturday. Fowler was having a slower quarter with Kadie-Ann Dehaney playing brilliantly, Teague-Neeld missed a Super Shot and the Vixens were closing in. Marinkovich rolls in Glasgow for Teague-Neeld who immediately hits a huge Super Shot, planting the “must defend her” seed in the heads of the Vixens defender’s and opening up Jhaniele for two late goals to stretch the lead to nine.

With that awesome defence and really strong midcourt, secondary scoring was the final box to tick for the Fever and it looks like they may have found it.

Business as usual for the Lightning

Speaking of new recruits, how good is Mahalia Cassidy?

I think we’ll all be looking back at that pickup, off the back of Laura Langman’s retirement, as one of the best player additions in recent history.

Her effort is incredible and she always seems to make the right pass, whether it’s a feed into the goal circle or a pass through the middle that opens up everything for the Lightning attack end. And she even threw on the WD bib, in a real Langman-like move, to close out the game!

And if Cassidy didn’t impress you, then the continued development of Cara Koenen at GS must have! I saw a discussion on Twitter on Saturday night where some fans made the call that they had never seen a shooter wide open so many times than Koenen against the Magpies, and I had to agree. Her off-ball movement is outstanding and near impossible to defend against.

But don’t let the final score of this one fool you, save for a big 21-point quarter from the Sunshine Coast, the Magpies were well and truly in this one. Get rid of that -5 point third and they are just six points behind and well within striking distance.

Having Kelsey Browne and Ash Brazill back and firing should be massive for this team, particularly when Browne can put together those 50+ minute WA onslaughts she’s known for.

Shimona Nelson and her turnovers should be a concern for Collingwood fans. She led all players with six general play turnovers, four of which were of the “bad hands” variety. They are just killers and can brutally halt momentum.

This one was picked to be the game of the round and it did not disappoint.

When I found out that the extra time rule was back on for the 2021 season, I rejoiced. Not because I hate draws, which I do, but because I knew that it would offer up unforgettable moments of drama like what we had between the Firebirds and Swifts on Sunday.

One minute remaining in the fourth, scores level, Romelda Aiken sells the biggest piece of candy in the Firebirds shooting circle and Kim Ravaillion hits her, Firebirds take the lead with 16 seconds to go, Firebirds centre pass, Sarah Klau comes up with a massive interception, Paige Hadley fires a bomb from midcourt to Helen Housby who drops it in it.

I think Laura Geitz and Liz Ellis put it best when they said, in unison “We’re going into extra time!”

Round 1 of the 2021 season and we've already had a finish like this? This is going to be a huge season and this game proved that anyone can win it.

You can watch the full replay and extra time on the Netball Live App.#SSNFirebirdsSwifts #EverythingIsPossible pic.twitter.com/o9pRdmVslx

Sure, it was a bit of a fizzer from there with the Swifts pouncing on a few Firebirds mistakes and coming away with the win, but how good was that?

It was great to see Gretel Bueta and Kim Ravaillion not only make their return from a year away from the game as they became mums but dominate! Bueta was back to her normal freakishly athletic self and Ravaillion was as steady and unrelenting as ever.

But this was a huge win for the Swifts, who showed great resiliency. The Firebirds are going to be a tough team to beat this year, particularly at home in front of one of the most incredible netball fans I’ve ever seen (on TV).

Hats off to the mighty Sam Wallace, who hit an impressive 49 of 49 under the post for the day, all of which were met with exactly zero cheers from the almost capacity crowd at Nissan Arena. 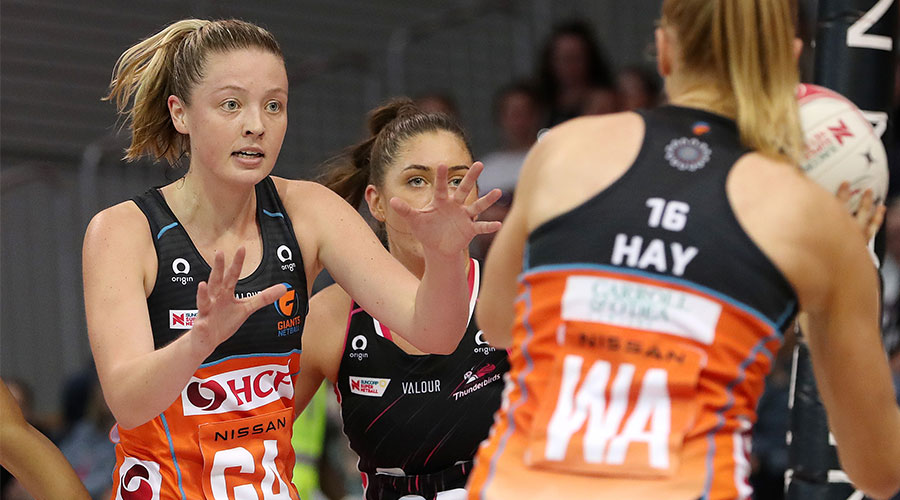 GIANTS dominate, but at what cost?

Like I said in my section of our new Game Changers segment, GIANTS Captain Jo Harten changed the flow of their Round 1 match against the Thunderbirds.

When Kiera Austin went down in the opening minutes of the second quarter with what looks like a pretty serious knee injury, Harten pulled in her teammates and got their minds back in the game. They never missed a beat from then on, beating the Tbirds by 14.

It could be a defining moment for this GIANTS team, and not in a negative way. Yes, losing one of your best players always hurts and (if she does miss time) Kiera Austin looked poised for a gigantic season, but it can also galvanise a team.

GIANTS fans will be hoping it does the latter.

It wasn’t a great day for a Thunderbirds team who looked lost and, I hate to say, a bit of a mess to start the season. No team had more turnovers in round one than the Thunderbirds’ 25, only the Vixens scored less points than them (51 vs 52) and only the Firebirds committed more penalties than them (118 vs 95).

There were a few silver linings. Hannah Petty, who always gives her all, did some good things and Sam Gooden looked really confident shooting, finishing with 20-points and a round-high five Super Shots.

They’ll be hoping for a big bounce back next Sunday when they travel to Brisbane for a battle of the birdcage against the Firebirds which, as we saw this weekend, is not going to be an easy task.