Learn how the Swifts dismantled the Vixens, the Lightning handed the Fever their second straight defeat, fire beat thunder in the battle of the birds and how the GIANTS spoilt the party in Geva Mentor's 200th.

NAIDOC Week celebrations are held across Australia each July to celebrate the history, culture and achievements of Aboriginal and Torres Strait Islander peoples. NAIDOC is celebrated not only in Indigenous communities, but by Australians from all walks of life. Netball Australia used this week as a great opportunity to participate in the celebration of this important and special commemoration.

We also celebrated four milestones, the Vixens broke a season record that they won't want to remember and with only four games remaining, the top two spots on the ladder are still anyone's to claim.

It wasn’t the most exciting start to Round 10 with the Swifts dismantling the Vixens by 14-points at John Cain Arena. The margin doesn’t do justice to how dominant the Swifts performance was on Saturday, as it blew out to as high as 23-points in the last quarter.

If it wasn’t for Mwai Kumwenda catching fire during the final Power 5 period, shooting six Super Shots in a row to close out the game, the result would have been even more dire for the Vixens.

I touched on the Vixen’s record of poor opening halves in 2021 in my Round 10 preview, commenting on how vital it was for the Vixens to start well and keep a tight leash on their heavily favoured opponents at the main break. Unfortunately, the Vixens did the complete opposite.

It took the home team five minutes before they put through their first goal of the afternoon, by which stage they were already trailing by six. The Swifts had only lost four first-half quarters this season (out of 18) but none more dominant than this one.

In Round 9, Wallace shot a season low of 76% and was substituted out for Sophie Garbin in the second quarter, so all eyes were going to be on how the Swifts GS responded. And as all great players do, Wallace put the disappointment of last week behind her to help guide the Swifts to victory with an incredible display of shooting. Wallace shot a game high 33 from 33 attempts, including one Super Shot.

Sarah Klau was incredible in defence for the Swifts and gave the Vixens no hope in mounting a comeback. Klau had an 8cm advantage over her direct opponent in Kumwenda, which allowed her to control the lob passes coming into the goal circle. Kumwenda was unable to get into a rhythm with her leading patterns, so Vixens coach Simone McKinnis was forced to make multiple positional changes in an attempt to spark more scoring.

The Vixens were right to make some positional adjustments but at that stage the game was already lost. It took the Vixens 23-minutes to reach 10-points, the longest time taken to reach 10-points all season for any team. The Vixen’s half time score of 15 was also the lowest half-time score recorded so far this year. In fact, the Vixens currently hold three of the four lowest half-time totals in 2021, scoring only 20 and 19 in Round 2 and Round 3 respectively.

This was a big win for the Swifts, not just in total margin but in the scheme of the season. The Swifts remain on top of the ladder and are now 7% ahead of the Lightning in percentage. 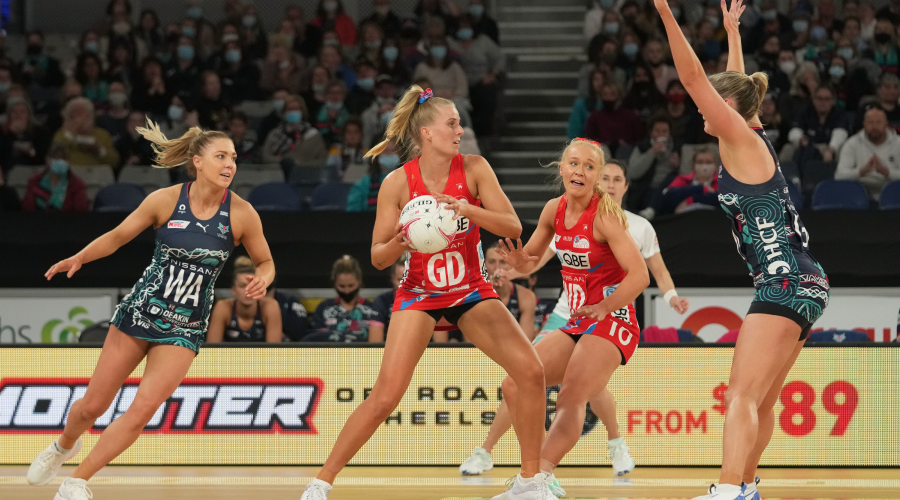 This was always going to be the game of the round and it certainly didn’t disappoint. A tight opening half saw the scores locked at 33 apiece, with a third quarter master-class from the Lightning proving to be the difference.

The Lightning were able to get the four-points and help celebrate Cara Koenen and Mahalia Cassidy’s 50th national league game.

When these two teams played each other back in Round 3, the Fever ran away with an emphatic 15-point win. Jhaniele Fowler scored an incredible 59 goals from 61 attempts at 97%. Fowler was unstoppable to start the season, scoring 50-points or more on six occasions as the Fever were undefeated and looking invincible.

However, teams seem to be working out Fowler and reducing her impact on games. Fowler is still putting up high numbers, however as recent history shows, when Fowler scores under 50 the Fever find it very difficult to win games. The Fever have now lost two games in a row with Fowler scoring 47 and 45.

The key to beating the Fever seems to be pressuring their midcourt and being patient when in possession of the ball. The Fever like to move the ball as quickly as possible from their defensive third to their shooters, so if you are able to hold them up as long as possible, you can begin to pick off the long feeds into Fowler.

Laura Scherian, Maddy McAuliffe and Cassidy all featured at the top-end of the deflections, intercepts and gain’s statistics. This shows the defensive impact the Lightning’s midcourt had on the game and how it was disrupting the Fever’s link between defence and offence.

In Round 3, Courtney Bruce got the superiority over her opponent, resulting in Koenen being subbed out of the game midway through the second quarter.

This time around it was Bruce who was forced into a positional change due to the impact Koenen was having on the game. Koenen was lively in her positioning to start the game, electing to create space that she could lead into. Bruce is known for using her physicality and intensity to outwork her opponents, but in this case Koenen was able to match and even out-body Bruce.

Player of the Match Steph Wood put together arguably her best performance of the season, finishing with 19 goals, 25 feeds, 21 centre pass receives and 18 goal assists in a truly remarkable outing. Wood recorded almost 80 more Nissan Net Points on Saturday than when these teams last met, an improvement that helped the Lightning snap a four-game losing streak to the Fever. 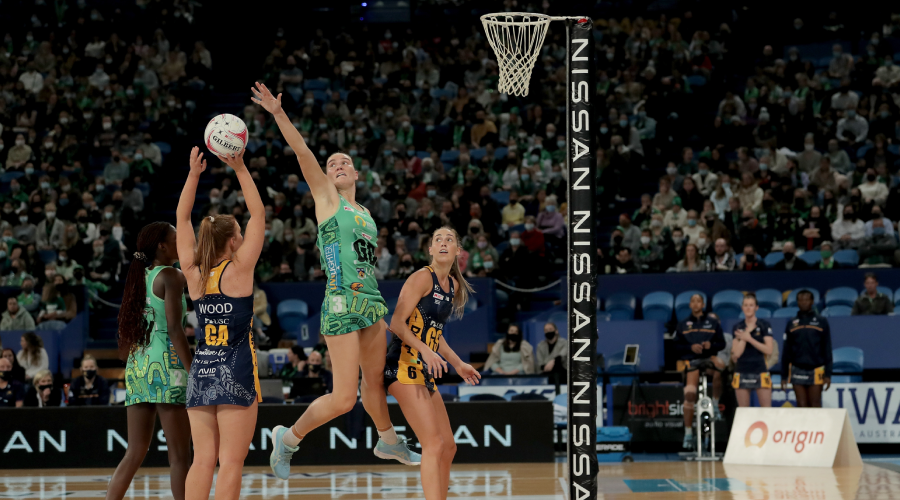 It was fire vs thunder in the first game on Sunday, as the Firebirds were eventual 16-point victors in what can only be described as organised chaos.

In similar circumstances to the Lightning vs Fever clash, it was neck and neck in the first half until the Firebirds put their foot down in the third quarter to take a 10-point lead, completely taking the sting out of the contest.

It was the midcourt and attack of the Thunderbirds who seemed to be having difficulty finding open teammates as Hannah Petty, Georgie Horjus and Maisie Nankivell all had over five General Play turnovers for the game.

In such a high-turnover game, the result was always going to be decided on which team could settle first. In the end it was the Firebirds who were able to compose themselves and make the Thunderbirds pay from their turnovers.

The switch of Jemma Mi Mi for Lara Dunkley at the WA position was an important tactical change that added some speed and a bit of extra creativity into the Firebirds midcourt. Mi Mi finished the game with 18 feeds, nine goal assists and ten centre pass receives in only a half of netball.

After one of the best individual performances of the season last week, Shamera Sterling had a quiet output in this match. Coming into Round 10, Sterling was averaging 74 Nissan Net Points (2nd overall) however was kept to just 31 on Sunday. It was a frustrating outing for Sterling who finished with 14 penalties and five turnovers.

The Firebirds have kept their finals aspirations alive with this win, sitting in fifth position and on equal points with the Fever. Their only concern will be their percentage, as they are currently 12% behind the Fever.

Round 11 can’t come quick enough with the Fever hosting the Firebirds for the battle of fourth spot. If the Firebirds lose, it's just about season over. 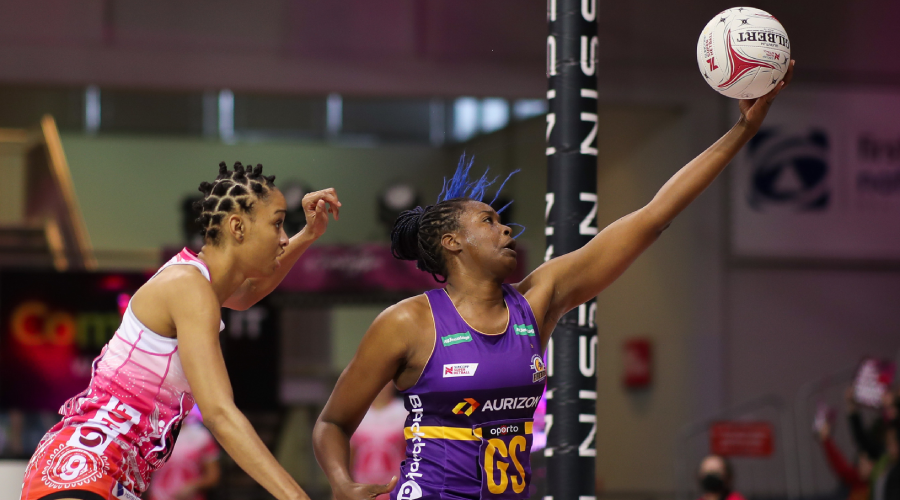 The final game of the round was another one-sided affair, with the GIANTS getting their season back on track with a 9-point victory over the Magpies.

Geva Mentor played her 200th national league game on Sunday. Mentor made the move to Australia in 2008 with the international superstar captaining the Magpies for the past three seasons. Mentor has won just about all the honours there is to win in Netball including four championships across the ANZ Championship and Super Netball League. Congratulations Geva on an incredible career.

Unfortunately, the GIANTS spoilt the party for Mentor and the Magpies with a solid win after a frustrating performance last weekend. Since the inaugural season of Super Netball in 2017, the GIANTS and Magpies have played each other 11 times, the GIANTS have now won 10 of those 11.

The GIANTS, who had been forced into lockdown across three separate states, were showing signs of mental fatigue and a severe depletion in energy in their recent games. But the GIANTS came out with an excellent display of enthusiasm and vibrancy that ultimately led to this vital victory.

This newfound level of energy was evident in the GIANTS defensive efforts across the entire game, with every player who stepped onto the court recording a deflection. It might not seem like a big achievement on paper, but this showed that every player was switched on and had bought into the team’s standards for the day.

It was always going to be a tough task for the Magpies with the news that Kelsey Browne would miss this game due to concussion sustained from a knock to the head during the third quarter of Collingwood’s Round 9 match against the Adelaide Thunderbirds. Browne is ranked fifth in total goal assists in the competition and the Magpies’ shooters certainly missed that connection.

Jodi-Ann Ward was the shining light for the Magpies in defence, helping herself to ten gains, six interceptions, four deflections and three rebounds. If it wasn’t for Ward’s phenomenal efforts in defence, the margin of defeat would have been a lot greater for the Magpies.

With the Lightning and Swifts, who are tied in first position on 28 points, going head-to-head in Round 11, the GIANTS will be able to jump the loser of that game and move into second position with a win against the Vixens. The Vixens have been extremely disappointing this season so the GIANTS will not only be eyeing off a victory but also a great chance to boost their percentage.

It is going to be an exciting final four rounds of the season with every spot in the top four up for grabs! 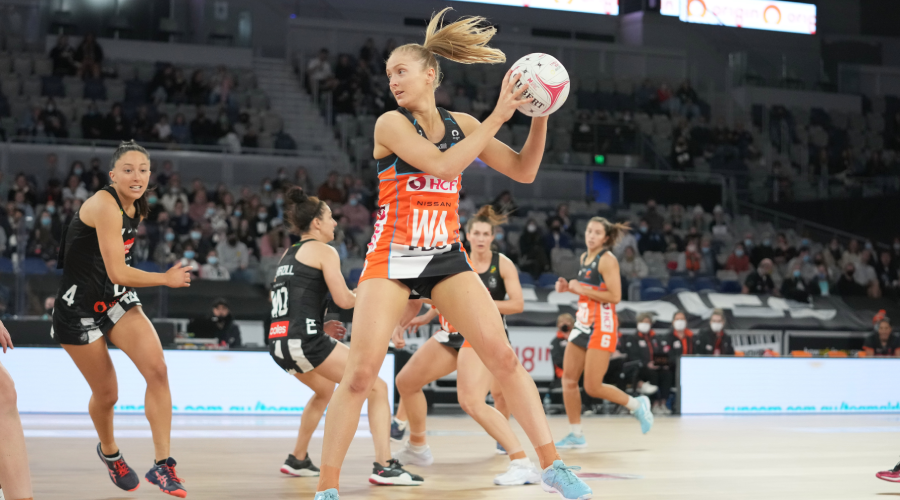