Learn how the Magpies upset the Swifts, the Fever extinguished the Firebirds, the GIANTS cemented a finals spot and how the Thunderbirds broke a winless drought against the Lightning.

Two midweek double-headers produced two upsets that have turned the competition on its head, with a spot in the top four still up for grabs.

It was an exciting week of Netball, including a last second goal to snatch victory, a coaching milestone and some individual brilliance.

The first game of this midweek Round 12 fixture didn’t exactly go as predicted. The Swifts came into this match as heavy favourites against an inconsistent Magpies team who had only won four games leading into this one. However, the Magpies put up their best performance of 2021 to upset the Swifts and, more importantly keep, their slim finals’ hopes alive.

The Magpies are still two games behind the fourth placed Lightning with just two games remaining, so realistically it would take a miracle for the Magpies to pinch a spot in the finals. But I’m sure this season has a few more twists to come, so don’t rule out anything!

Prior to this round, the Swifts were equal first and will now be kicking themselves that they didn’t get the points in what should have been a straightforward win. Now, the Swifts have dropped a game behind the GIANTS and risk dropping out of the four should things go really pear-shaped in Rounds 13 and 14.

Shimona Nelson was out of this world in her dominant performance inside the goal circle, ending the game with 69 goals from only 71 attempts (97% accuracy). Nelson finished with a game high 122 Nissan Net Points, the same as all three Swifts’ shooters combined.

The contest between Nelson and her direct opponent in Sarah Klau made for exciting viewing. The pair finished with the two highest Nissan Net Points for the match, and it was like watching two goliaths do battle. Klau recorded seven gains, five interceptions and four deflections; but it wasn’t enough to limit Nelson’s impact on the game.

The game was ultimately decided by the Magpies’ ability to cause and make the most of Swifts turnovers. Collingwood only recorded five more gains than NSW, however, they scored eight more goals from those gains. The Swifts only had a gain to goal rate of 17%, compared to the Magpies who ended the match with 59%.

Swifts’ shooter Sam Wallace was taken to the bench after shooting at just 66% under the post. Wallace only played 20-minutes in this game and was replaced by Sophie Garbin in the second quarter. Garbin had a productive output, scoring 34-goals on 95% shooting accuracy, however it wasn’t enough to claim victory.

In polar opposites, the Magpies have now won two games in a row and the Swifts are on a two game losing streak. It really isn’t the best time for a form slump for the Swifts’ with only two rounds remaining before finals. 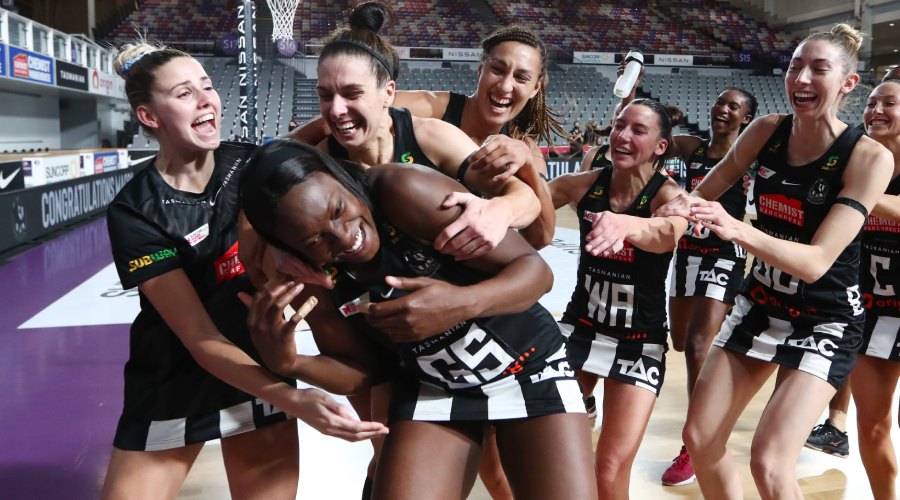 The race for a spot in the finals is heating up, and with these two teams separated by only one game leading into this match, the stakes couldn’t have been higher.

Unfortunately fans weren’t treated to the spectacle they were hoping for, as the Fever were clinical in their 10-point victory. A win here would have been huge in the scheme of things, as the Firebirds would have drawn level with the Fever and moved only a game behind the Lightning with a healthier percentage.

It was always going to be a tough task, not only because the Fever are the team to beat this season, but also after vice-captain Tara Hinchliffe was ruled out for the remainder of the season with an ACL injury. Romelda Aiken was also an injury concern for the Firebirds, with the star shooter tweaking her ankle in their Round 11 clash against the Lightning. Aiken courageously still played and scored 41-goals (more than her season average).

Penalties were a major concern for the Firebirds, registering 68 total penalties to the Fever’s 37. Rudi Ellis, who has taken the GK bib in the absence of Hinchliffe, copped 22-penalties of her own, doing her part in gifting Jhaniele Fowler 23-penalty shots. In comparison, Aiken only had four penalty shots for the entire match.

Fowler was just Fowler again. The superstar had a game high 140.5 Nissan Net Points, 40 more than the next best in Gretel Bueta. 140.5 is the highest total NNP recorded by an individual this season, showcasing just how spectacular this performance was. Fowler has now recorded over 100 NNP for the fifth time this season, the only player in the competition to have more than three games over 100.

Verity Charles was also spectacular in her team’s win, recording 43-feeds, 26-goal assists and 23-centre pass receives. The link between Charles and Fowler is unmatched and the duo will play a big role in their quest for the 2021 Premiership.

Remarkably, after starting the season 12-points behind, the Fever are now only one game from pinching top spot with the highest percentage in the competition.

A big congratulations to Stacey Marinkovich who coached her 100th game as Fever coach. What an amazing achievement, well done Stacey! 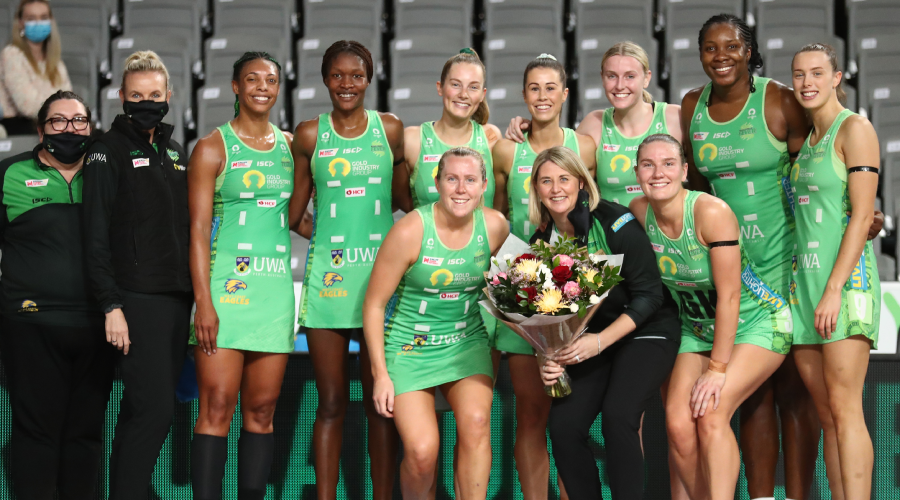 It was first vs last and the GIANTS came into this game as almost certainties to claim victory. However, it’s matches like these that will always make the favourite nervous. Going up against a team that has nothing to lose can be a tricky task, and with the Vixens completely ruled out of finals contention, they certainly had nothing to lose.

The GIANTS had to stick to their structures and couldn’t afford to be complacent against a team capable of causing an upset. To their credit, despite a last quarter lapse, the GIANTS took care of business and came away with an important win that pushed them a game clear on top of the ladder and secured their first finals appearance since 2018.

I made mention of the Vixens’ struggles to put points on the scoreboard this season, failing to score over 50-points in their last three matches. The GIANTS have the lowest points against across the entire competition, only conceding 55-points on average.

So, when the Vixens only managed to score 20-points in the entire first half, those hopes were quickly diminished. The Vixens are just simply struggling to find other avenues to scoring, with Mwai Kumwenda the only player on her team with over 100 goals this season. The Vixens are the only side who don’t have more than two players who have scored 100 goals or more in 2021. Kaylia Stanton and Ruby Barkmeyer only managed to score a combined total of 6-goals for the entire match.

Player of the match Jamie-Lee Price and fellow mid-courter Amy Parmenter were a force to be reckoned with. The pair combined for 152 Nissan Net Points (with Parmenter sitting the entire last quarter) and were in complete control of the game.

Despite this dominance, Hannah Mundy held her own and then some. The young gun has been the shining light on a disappointing Vixens’ season, and once again had a solid impact for her team.

The Vixens can take another positive out of the game as they managed to win the last quarter by 2-points. This is becoming a bit of a concern for the GIANTS, who have only won three last quarters out of 12 for the entire season. With finals soon approaching and knowing games will become a lot closer, the GIANTS will want to remedy their last quarter lapses before it’s too late. 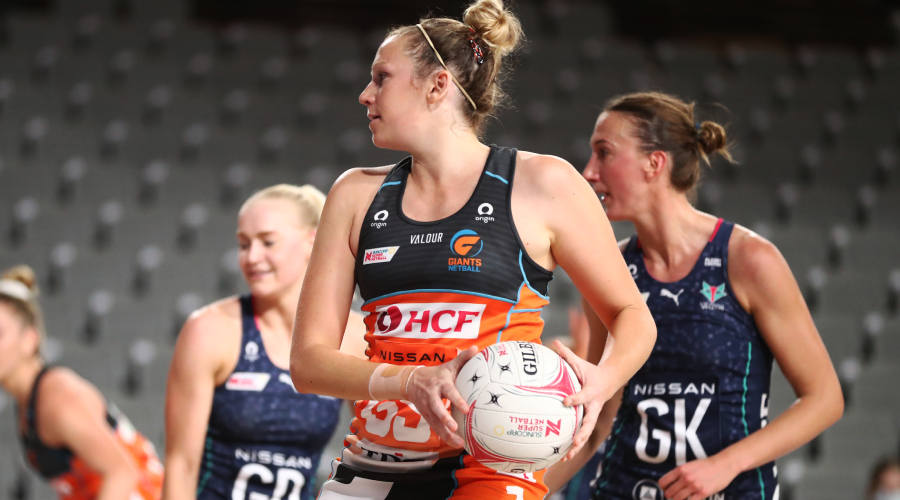 Just when you thought the Magpies defeating the Swifts was the biggest upset of the round, the Thunderbirds completely shook the competition with a thrilling win over the Lightning.

This marks the first time in Super Netball history that the Thunderbirds have defeated the Lightning. Eight matches, eight defeats. Until now!

Back in Round 5 the Thunderbirds almost pinched victory, going down by just 1-point. Well, now justice has been served with the Thunderbirds turning the tables to claim a 1-point victory of their own.

It was a tight battle throughout the entire match, with the teams going goal-for-goal in the last quarter until Potgieter scored the winning goal to clinch a famous victory. It wasn’t all pretty though, with Potgieter missing her first attempt and leaving fans with their heart in their mouths, before the Thunderbirds’ GS was successful on her second attempt.

It was fitting Potgieter hit the winning shot, as she was named the player of the match after scoring a game high 40-goals on 97% shooting accuracy. Funnily enough, her only miss of the night was on her first attempt to win the game, but fortune favours the brave and Potgieter had the courage to try again only seconds after missing.

Laura Scherian was important all game and did everything she could to will her team over the line. Unfortunately it wasn’t enough, and now the Lightning have an interesting week ahead of them.

This loss could have huge ramifications on the Lightning, who have now lost their second game in a row. In the next two rounds, the Lightning will face the GIANTS and Swifts in two tough matchups.

If they lose both games, and the Firebirds win their next two, the Lightning could incredibly drop out of the finals. Only two weeks ago the Lightning were sitting pretty on top of the ladder. How quickly the season can turn on its head! 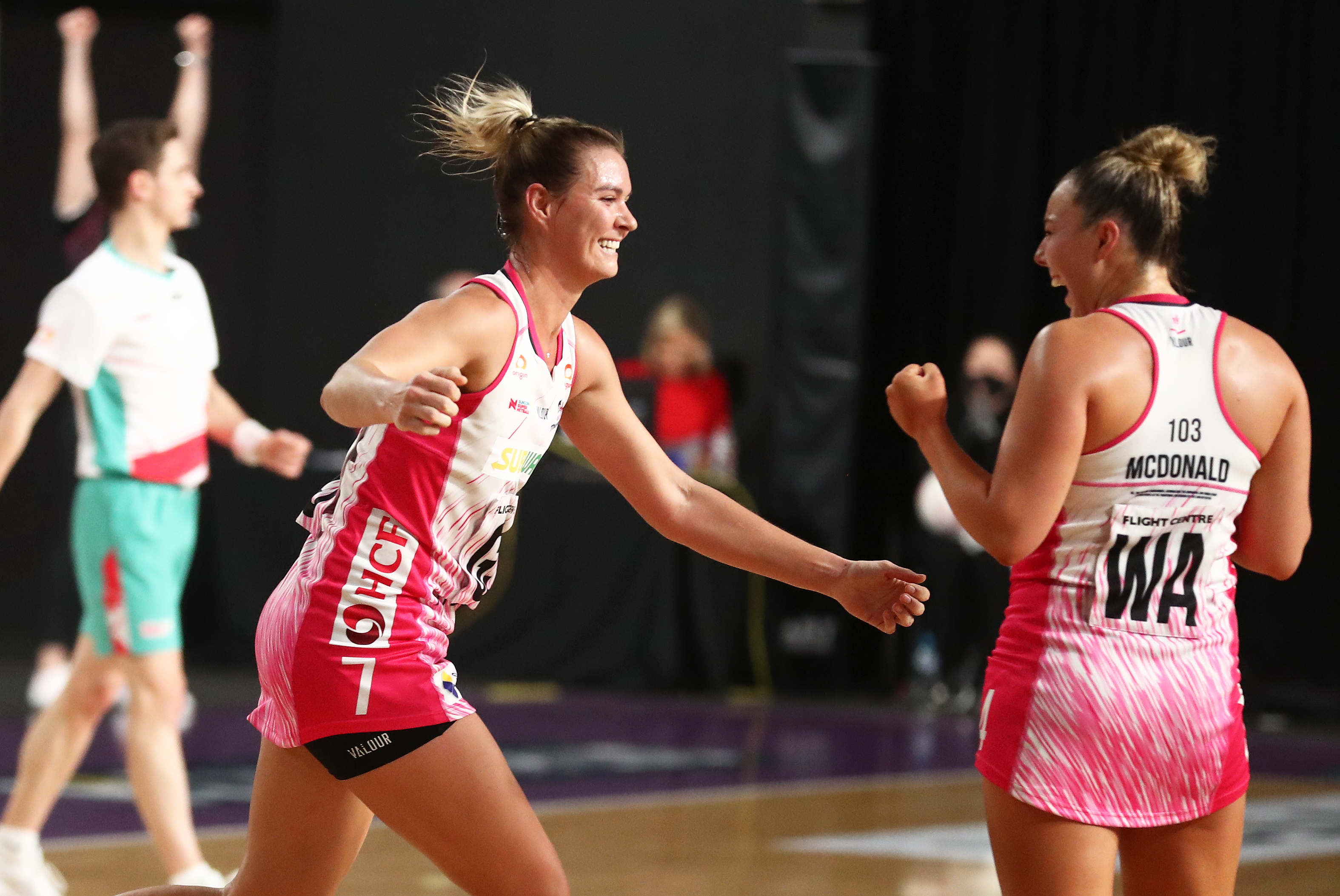