So far, we have analysed the Melbourne Vixens, Adelaide Thunderbirds, Collingwood Magpies and Queensland Firebirds.

So, moving up the ladder, we will now delve into the year that was for the Sunshine Coast Lightning. 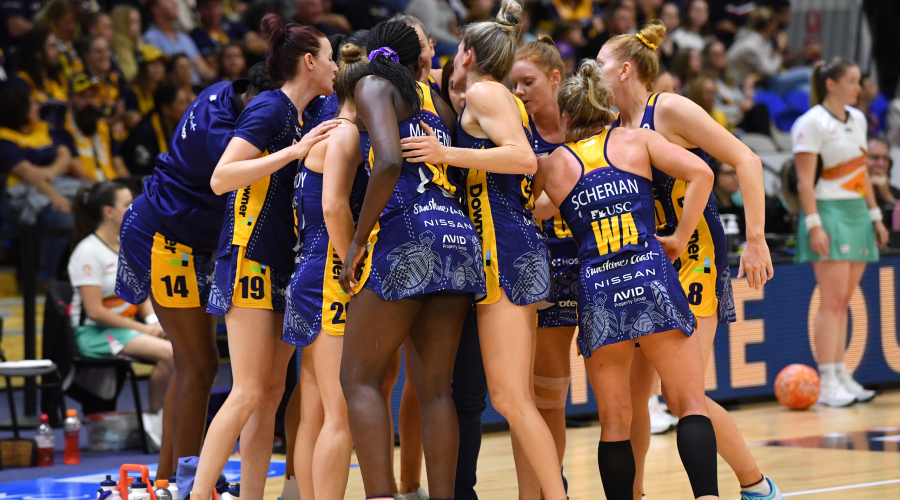 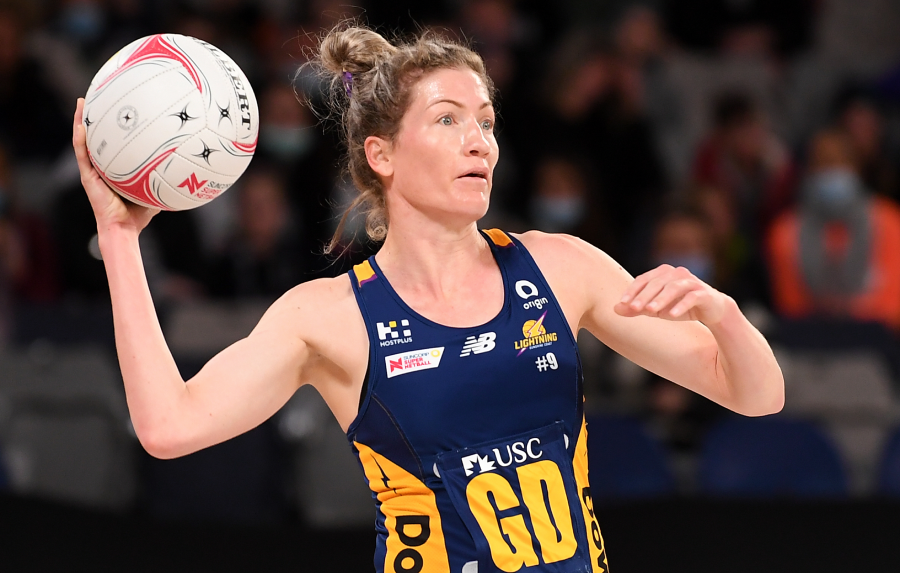 The Sunshine Coast Lightning put together an honest 2021 campaign, one that saw them play finals for the fifth consecutive season.

You could argue that their round 13 thriller over the GIANTS, which secured the Lightning a spot in the finals, was their best win of the year. But, (spoiler alert) you will only need to scroll down the page slightly to read about that.

In terms of their best full four-quarter team output, the Lightning's round 10 win over the Fever was as clinical a performance as you would have seen all year.

Coming into this game, the Fever were as hot as any team in the league, dropping only one game in their previous nine encounters.

The last time these teams met was back in round 3, when the Fever totally dismantled the Lightning to the tune of 15-points.

With the scores locked at half time, a Fever outfit playing in front of a home crowd and determined to make amends of their first defeat of the season in the round prior, many expected them to run over the top of their opposition in the second half.

The Lightning ran out eventual winners, with the 19-point turnaround from round 3 moving them to equal first on the ladder.

Cara Koenen, in her 50th national league game, was the Player of the Match.

The star shooter was able to not only nullify Courtney Bruce’s influence on the game, but Koenen was also able to impact the scoreboard; shooting 44 goals from 48 attempts (92%), along with five-rebounds.

Flashback just one week prior, the Lightning suffered an embarrassing defeat to the bottom of the ladder Melbourne Vixens. The ability to regroup in such a short turnaround from their disappointing display against the Vixens, to then knock off the best team in the competition adds further fuel to the significance of this win.

This was the best team performance the Lightning displayed all season, which led to many to believe that they could go all the way in 2021 on the back of this win. 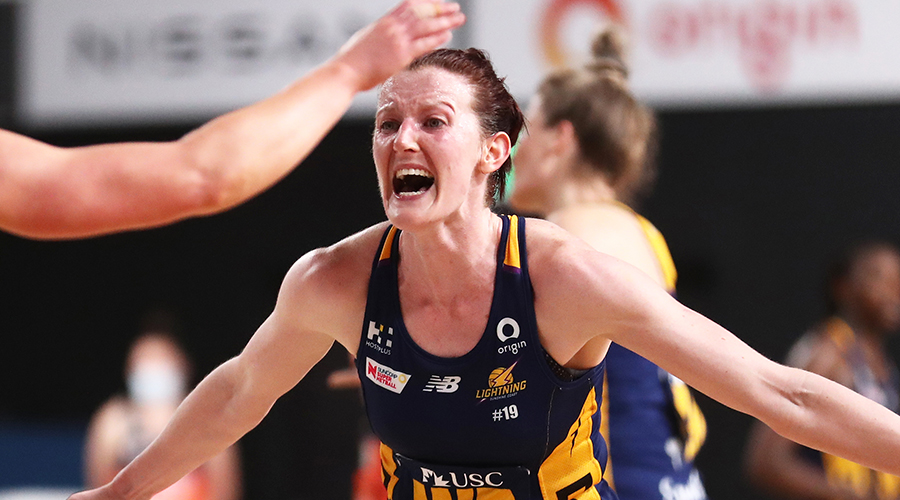 The Lightning are the only team in Super Netball history to play finals in every season.

So, when the team from the Sunshine Coast lost three of their last four games heading into their round 13 clash against the GIANTS, that record was looking vulnerable.

Halfway through the season, the Lightning were sitting on top of the ladder and were one of the favourites to win the Premiership. Fast forward a month, and the Lightning were fighting for that fourth position, with the Magpies and Firebirds nipping at their heels.

The Lightning had to win to guarantee a spot in the finals, as a loss would open the door to the Magpies who were coming home with a wet sail.

Neither team could be separated in the first. But, when star shooter Steph Wood limped off the court with a knee injury, as the GIANTS held a 5-point lead late in the third quarter, you got the sense the game and their season was slipping out of reach.

With the injury to Wood, Proscovia was subbed into the GS position with less than two minutes remaining in the third.

Proscovia then went on to score 21 of the next 23 goals for the Lightning, including a goal with less than ten seconds remaining in the game to force Extra Time.

Player of the match Mahalia Cassidy willed her team to victory, finishing the contest with a game high 83.5 Nissan Net Points, 16-goal assists, 23-feeds, four gains, three interceptions and only one turnover.

The Lightning came away with a one-point victory in the most thrilling game of the season, to clinch their fifth consecutive appearance in the finals.

This occasion also marked Steph Wood’s 100th national league game and, despite injury, would have been proud of her team to get the win in the team’s most important game of the season.

If this doesn't get you excited for finals, we don't know what will!#SSNLightningGIANTS #EverythingIsPossible pic.twitter.com/h7DXfof0ki

The Lightning put together another solid season with all players contributing across the board.

In terms of statistics, there weren’t any major jumps in form from season 2020 to 2021. But, improvement is not always measured by statistics; and this is why I have given Cara Koenen the nod for most improved.

Koenen was a foundation player at the Lightning ahead of the club's inaugural season in 2017 and has remained on the Sunshine Coast ever since. The star shooter will continue her career in Lightning colours after re-signing with the club for season 2022.

Koenen scored a career best 517 goals this year, 26 more than her 2020 output. However, it was the way in which Koenen was able to develop her game from a tactical standpoint that really stood out this season.

After the departure of Caitlin Bassett in 2019, the young 190cm shooter was given the opportunity to lead the Lightning in the GS position. Alongside Steph Wood, the duo have established a formidable goal circle that has kept the Lightning towards the top of the ladder.

Despite GS being her favoured position, the major improvement from Koenen in 2021 has been her ability to switch to the GA spot and provide her team with versatility in the attacking third when required.

Koenen has always preferred the baseline drive but has now added the flexibility to come out to the GA position and provide her team with a target higher up the court.

An example of this was in the Lightning’s round 7 clash against the GIANTS. With the scores tied at the final break, Koenen was moved into the GA position and single-handedly led the Lightning to victory with her long range shooting and defensive pressure down the court.

Koenen’s ability to mix up her game against contrasting defenders has allowed her to further develop her game. 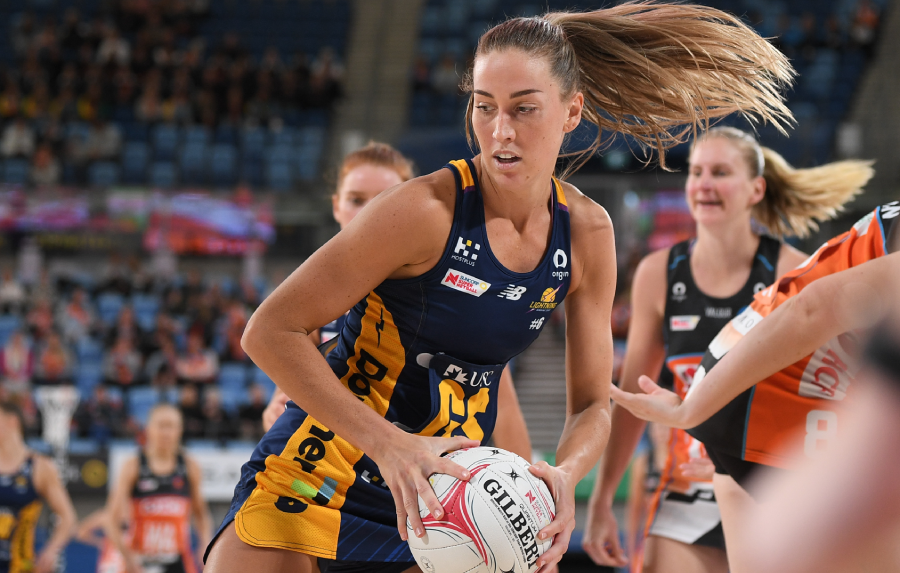 Considering the Lightning have made the finals in every season they have competed in the Super Netball competition, there aren’t any major improvements that stand out.

For a team that has been competitive since their foundation season, the difference between being knocked out in the first final and going all the way can come down to miniscule factors.

The key improvement that the Lightning will need to focus on in season 2022 is their consistency and ability to perform week in, week out.

There is an abundance of talent within this core group that has the ability to win the Premiership, but it’s the lapses during games and the capacity to back up performances from week to week that needs to be tweaked.

When the Lightning are on, they’re on. At the midway point of the season, the Lightning were sitting on top of the ladder and seemed like they had all of the pieces to make a real claim for the Championship.

After starting the season 6-2, the Lightning then lost to eventual wooden-spooner's Melbourne Vixens by three points. The following week, they knocked off the Fever who had only lost one game all year.

This just goes to show the inconsistency within this group. At their best, they can beat the best; but, when the team isn’t switched on, they can drop winnable games.

Another one of the main areas for improvement is their transitioning through the midcourt. Wood, Koenen, Pretorius and Hinchliffe is as solid a bookend as you could hope for, but the Lightning’s movement through the middle is where their game tends to break down.

Scherian and Cassidy are solid, but losing McCauliffe opens a gap in their midcourt. McCauliffe was usually the one to steady the ship when things were going south, so it will be interesting to see how the Lightning cover the loss of such a pivotal player.

Injuries are also a concern, with Hinchliffe set to start the season on the sidelines due to her ACL and with Wood dealing with that troublesome knee that saw her miss games last year.

New recruit Dehaney will cover Hinchliffe’s absence for the time being and with captain Pretorius re-signing, the Lightning will still be strong in defence.

If the Lightning can remove those lapses from their game, then we can expect to see them challenging for the finals once more.

It was a season of momentum swings for the Lightning in 2021.

At the halfway stage of the season, they were the team to beat. Fast forward a month and the team from the Sunshine Coast were battling it out for the last remaining spot in the finals.

Injuries at the business end of the year didn't help their cause, but the Lightning will be disappointed they weren't able to make the most of their hot start to the season.