So, moving up the ladder, we will now delve into the year that was for GIANTS Netball. 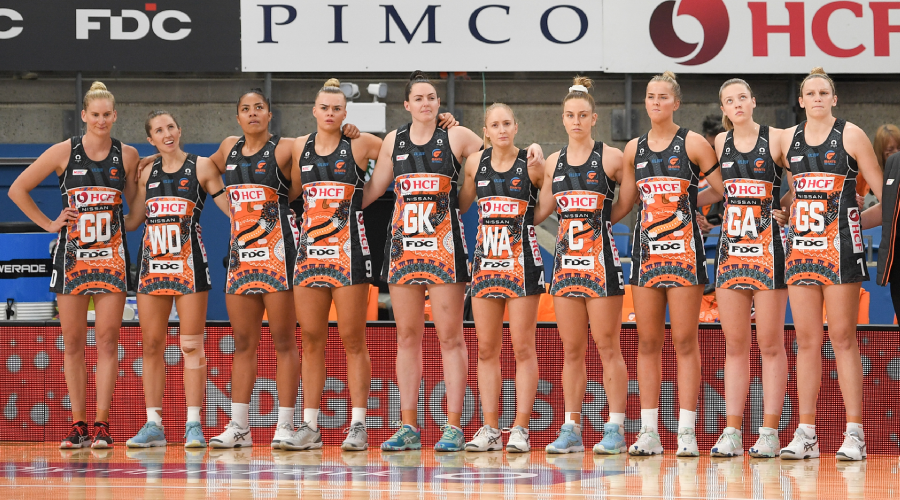 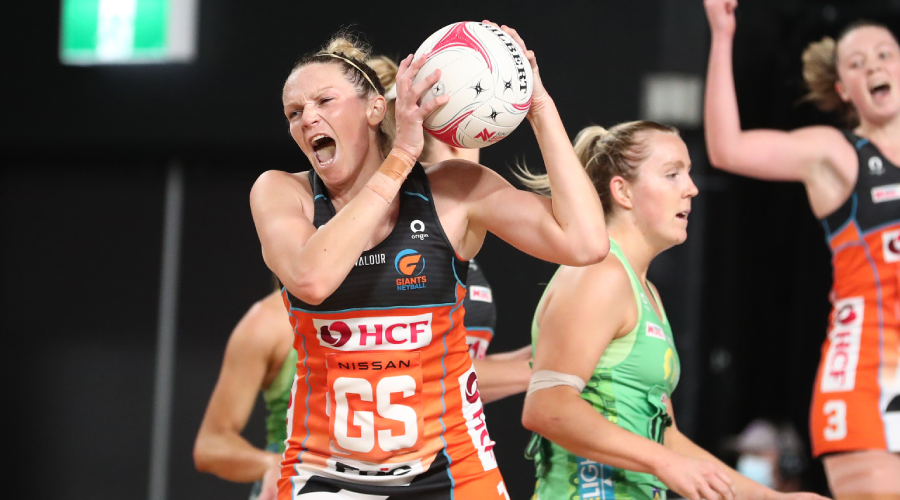 Considering the GIANTS finished on top of the 2021 ladder, wins were certainly not scarce for the women in orange.

Despite winning nine regular season games, the best win for the GIANTS came in the second week of the final series.

After losing the Semi-Final to the swifts by a heartbreaking one point margin, all the pressure in the world was suddenly dropped onto the GIANTS.

In 2018, the GIANTS claimed the Minor Premiership after winning ten regular season games. They were then kicked out of the finals series in straight sets by an average losing margin of seven points.

With the loss to the Swifts in the first week of the finals, uncertainty would have crept into the GIANTS’ camp, with a repeat of their 2018 finals campaign on the horizon.

However, to their credit, the GIANTS played like a team on a mission, knocking off the Fever who ended the season with the best record in the league.

The Fever only held the lead for 40 seconds across the entirety of the game, before the GIANTS took full ascendancy over the play.

Sam Poolman was the hero of the game, limiting the best shooter in the league's influence across the full four quarters.

This was one of those performances where the statistics don’t tell even half of the story. Poolman only finished with two gains and one deflection for the entire game, yet had arguably the biggest influence on the result.

This win marked the GIANTS first finals victory since 2017 and will provide the team from NSW with great confidence leading into next season.

A late attack from the Fever would have had @GIANTS_Netball fans quite nervous. Here is how they kept composure to book themselves a spot in the 2021 Grand Final 👏#EverythingIsPossible #SSNFinals pic.twitter.com/kqQL8OAtU7

I hope Fever fans aren’t reading this report card, because unfortunately they feature again in what was the GIANTS’ best moment of the year.

Fever had only lost five games for the entirety of 2021, and two of them were against the GIANTS within 14 days.

It’s quite often in sport that fans are under the impression that certain aspects of the game might be scripted, so when the battle for the Minor Premiership came down to the last match of the final round of the year, I too reached for my tinfoil hat.

Netball fans were treated to a spectacle in the final match of the regular season, with both teams locked on 32-points on the ladder and obtaining a percentage unreachable by the Swifts.

The winner would ultimately be awarded the 2021 Minor Premiership, and it was the GIANTS who came away with a hard-fought 2-point victory to claim their second Minor Premiership in Super Netball history.

Funnily enough, the Fever broke the record for the highest total points scored in a quarter (25) to open the game, taking a 6-point lead into the first break.

From then on, it was a GIANTS masterclass led by captain Jo Harten who finished the game with 40 goals on 95% shooting accuracy, including five timely Super Shots.

What was even more impressive with this win for the GIANTS was that they came into this game with only eight players on their list due to injuries and state restrictions. The GIANTS made no substitutions for the entire game, compared to the Fever who made 11 changes across the match.

With so much on the line in this game, along with such short turnarounds between recent matches, the ability to come away with a win and claim the Minor Premiership against arguably the best team in the competition, with only eight players to choose from, is why this match was the GIANTS’ best moment of the season.

The most improved nomination came down to two players for the GIANTS — Sophie Dwyer and Maddie Hay. I decided to go with the latter mainly due to the fact we didn’t get to see much of Dwyer in 2020.

With the injury to their young star shooter in Kiera Austin only 20 minutes into the season, a huge opportunity presented itself for Dwyer alongside Harten inside the goal circle.

Dwyer took that opportunity with both hands, putting together a remarkable debut season as a contracted player.

However, due to the lack of court time last season, we never really got to see Dwyer’s potential as a shooter in the league. So, when Dwyer came into the game to replace Austin in their round 1 clash, the young gun never looked back and has now cemented herself a role within this experienced GIANTS lineup.

Dwyer improved as each game passed, but, in terms of most improved from the 2020 season, it was hard to look beyond Maddie Hay.

Hay has been a training partner for the GIANTS since 2017, receiving her first full contract with the squad last year.

Hay was quick to assert herself as the starting WA in the GIANTS line up for 2020, playing 13 of a possible 14 matches in her first year as a contracted athlete.

Playing alongside Jamie-Lee Price and Amy Parmenter throughout the midcourt helped Hay’s development immensely, forming a solid foundation to build upon heading into the 2021 season.

Hay isn’t the flashiest of players, but she will always play her role and get the job done without fuss.

Hay was one of the most influential players in the GIANTS’ opening win against the Thunderbirds, finishing with 77 Nissan Net Points, 29 feeds, 17 goal assists and 21 centre pass receives.

The 26-year old midcourter continued that form right through the season, finishing the year top five in the league for goal assists, feeds and centre pass receives.

This breakout season by Hay was rewarded by her inclusion in the 2021 Nissan Net Points Team of the Year.

Hay just about doubled every major statistic from last season and has proven to be not only one of the most improved players in the competition, but also one of the best midcourters in the league. 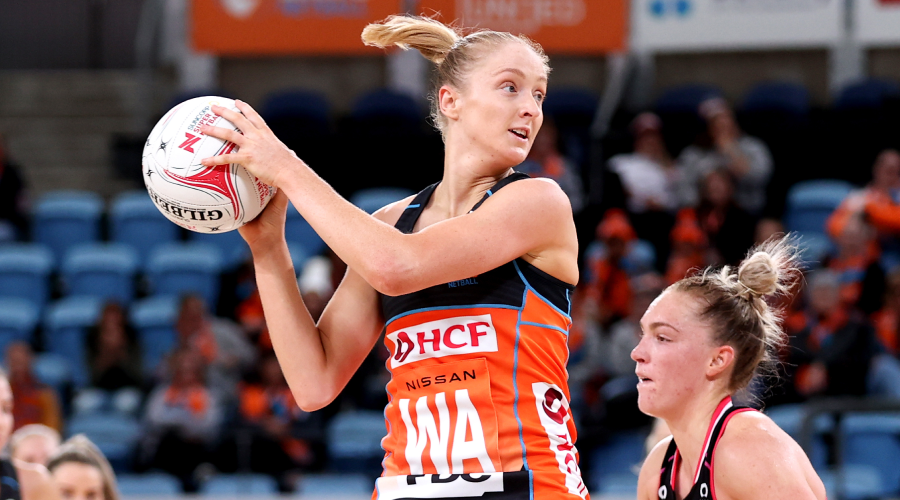 Similar to the Fever, the GIANTS are a tricky team to find improvements for, considering they missed out on becoming Premiers by just four points.

The GIANTS were crowned Minors Premiers for season 2021 so don’t expect too many changes tactic wise next year.

The one area we can expect to see changes will be in their defensive third, with the retirement of experienced GK Sam Poolman after their Grand Final defeat.

Poolman was the stalwart of the GIANTS’ defensive unit, holding down the fort and leading her team to the lowest goals against total in the league.

The absence of Poolman left a big hole to fill, but the GIANTS have wasted no time in their attempt to replace their former GK, signing former Swifts’ defender Lauren Moore ahead of the 2022 season.

The 23-year old was one of the youngest debutants in Swifts’ history, having been signed by the club at the end of the previous year at 17-years of age and whilst still in school.

Moore played predominantly at the WD position off the bench this season, but we will most likely see the young defender feature more inside the circle defence next year.

Matilda McDonell is another young defender who will see more playing time in 2022. With Moore and McDonell set to feature highly in this GIANTS defense, it is certainly a much less experienced lineup on paper without Poolman.

However, with the experience of Brandley at their side, both players will be given a great opportunity to develop and grow within this lineup.

Another area that may prove to be a touch concerning next season will be their shooting depth. Dwyer has been an amazing find for the GIANTS. However, losing Kiera Austin to the Vixens means Dwyer will once again need to perform at her best if the GIANTS are to repeat their 2021 efforts.

We saw in the Grand Final, when Dwyer struggled to impact the game, the GIANTS didn’t have the ability to bring on someone from the bench to ignite their offence. This lack of depth in front of goals is an area opposition teams will look to focus on next season when they come up against the GIANTS.

Keep an eye out for former GIANTS’ Training Partner - Matisse Letherbarrow next year. The GIANTS are excited about Letherbarrow’s potential so hopefully the young shooter can make the next step in her career.

The GIANTS got agonisingly close to winning their first Super Netball Premiership after claiming the 2021 Minor Premiership. It wasn't meant to be, however, going down to their NSW rivals in the Swifts.

When their young star Kiera Austin went down with an ACL injury in the opening half of the first round, the GIANTS' season looked to be over before it started.

To their credit, they managed to stay the course and found themselves sitting on top of the ladder after the regular season.

They have a great mix of experience and young talent across the entire board, in particular the immergence of Sophie Dwyer in the GA position was exciting to watch unfold.

This was the second time the GIANTS were crowned Minor Premiers yet failed to go all the way.

Despite this, the GIANTS had a remarkable season. Especially considering everything the team had to go through, after being forced into quarantine in four separate states in the one month.

They have lost some talented players but I do expect the GIANTS to be right back at the top in 2022.