So, last, but certainly not least, we will now delve into the year that was for the NSW Swifts. 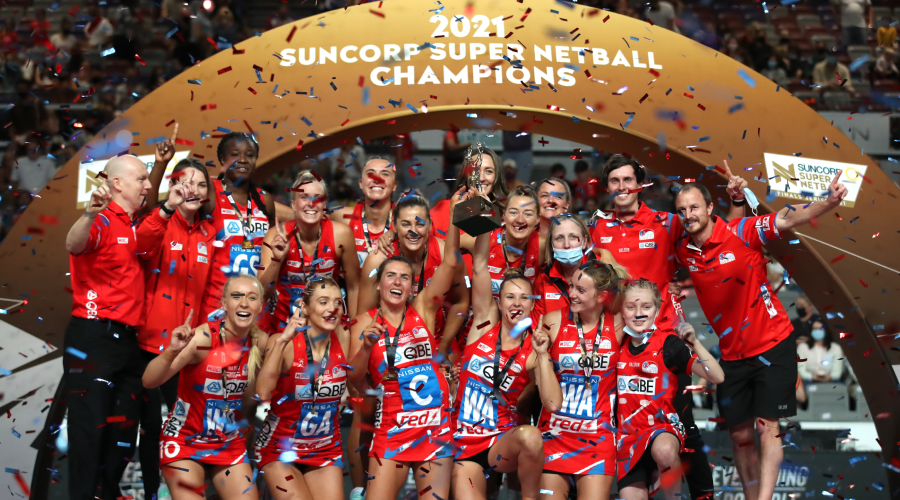 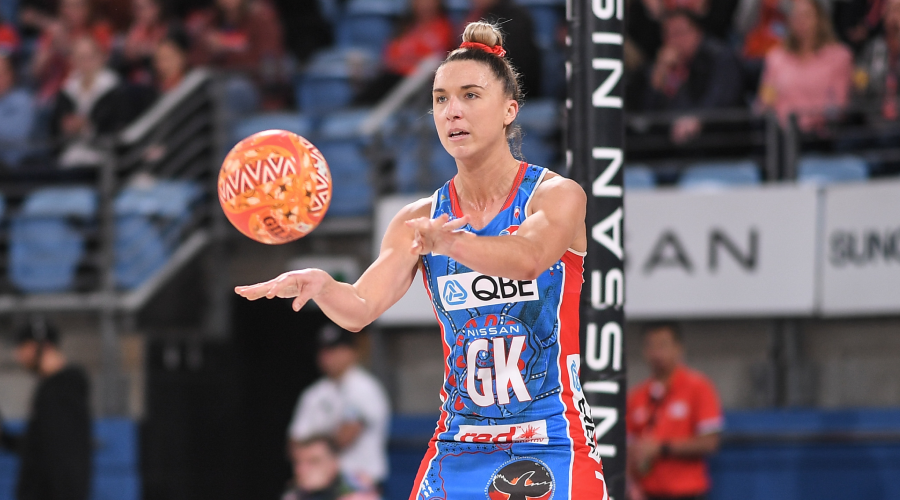 There should be no surprise to anyone that the Swifts’ Grand Final win over the GIANTS falls under their best win of the season.

Every team’s overall goal is to hold that trophy up at the end of the season, and the Swifts got to do exactly that.

Netball fans were treated to an all-NSW Grand Final this year, the first state derby to decide the Championship in Super Netball history.

The match wasn’t as tight as many were hoping for, as the four point final margin was not a true indicator of the Swifts’ total ascendancy over the GIANTS across all four quarters.

After spending a fair chunk of the season away from home, the Swifts were rewarded for their resilience and resolution by claiming their second Championship in three years.

Only three minutes into the opening quarter of the Grand Final, the GIANTS were forced to take a timeout after conceding the opening six goals of the game. Sam Wallace helped herself to all six of those goals.

Wallace finished the Grand Final with 51 goals on 93% shooting accuracy and would have gone very close to winning the MVP accolades.

That honour went to GD Maddy Turner who not only recorded a game high five gains, but was also very effective in limiting her direct opponent Sophie Dwyer’s output on the match.

The Swifts will be aiming to make it three Championships in four years and become the most successful team in Super Netball in 2022.

That's it! They've done it!

The best moment for the Swifts this season happens to fall under the same category as their best win.

Winning their second Championship in three years is as good of a story in its own right. However, the underlying feel good moment from this victory was the journey co-captain Maddy Proud took to claim her first medallion as a Swift.

Back in 2019, Maddy suffered a heartbreaking ACL injury that ruled her out for the remainder of the season. The Swifts then went on to win the Premiership in the same year without their star midcourter and captain.

After suffering such a debilitating injury back in 2019, Maddy was back to her absolute best. The Swifts’ co-captain ended her 2021 campaign seventh in goal assists (222) and seventh in feeds (374), despite missing two matches.

It’s common to see players return from such a serious injury and not be able to perform at the same level prior to injury. Whether it’s a loss of mobility or just a lack of confidence in the body, you can excuse any player who is unable to return to previous form.

But, Proud managed to squash those impediments and was back performing at the highest standard.

In the 2021 Grand Final, Proud put together an outstanding performance to lead her team to Premiership glory.

Proud finished the game with the second highest Nissan Net Points for her team (48), along with 35 feeds and 19 goal assists.

To see Proud holding the cup after missing out in 2019 would have made any netball fan smile, despite which team they support. 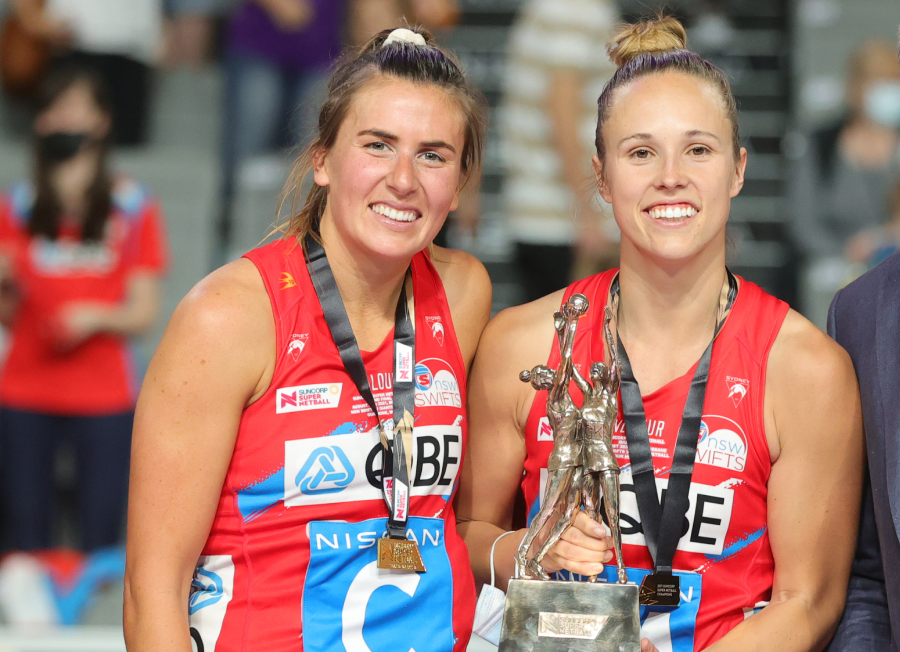 It was quite a tricky task picking the most improved player on a Premiership team full of established players.

The Swifts have always been a professional organisation and their list is as good anyone's in the league. Therefore, cracking that starting lineup is no easy feat.

Well, that is exactly what Tayla Fraser did this season, and is the reason for her most improved recognition.

In 2020, Fraser played only 133 minutes for the Swifts. Excluding their two training partners, this was the lowest minutes recorded out of the Swifts' squad.

Fraser was a nice option off of the bench but didn’t really hold a solidified position or role within the group.

Not much had changed to begin season 2021, with Fraser averaging just 15 minutes across the opening seven rounds.

The young mid-courter played most of her scarce time on the court in the C and WA position. However, in the Swifts’ round 8 win over the Firebirds, Fraser was handed the WD bib in the third quarter of this clash.

Fraser looked at home in defence, in a quarter where the Firebirds were kept to just nine points. The Swifts ended up running away with a 12 point victory and Fraser found herself a new role within this imposing squad.

From this game on, Fraser averaged 41 minutes per game for the remainder of the season, as well as playing all 60 minutes in the Grand Final.

In the most important game of the season, Fraser was given the tough job on nullifying the dangerous Maddie Hay’s impact on the game.

Every netball fanatic knows the WD position is one of the hardest and most underappreciated positions on the court. But, Fraser has made that spot her own and will be looking to make an even bigger step for her team in season 2022. 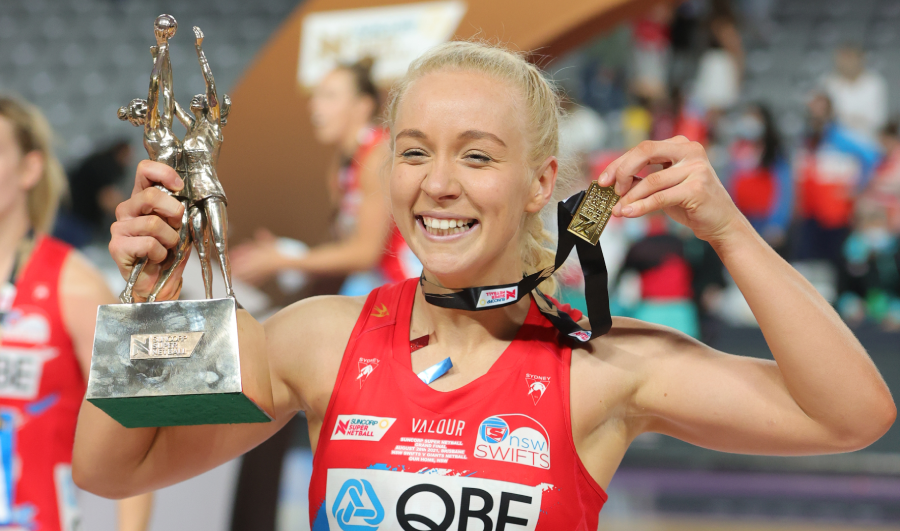 It might seem a tad fatuous talking about what areas a team can look to improve on considering the Swifts have just come off from winning the 2021 Premiership.

However, when the Swifts were given the title of Champions back in 2019, the team went on to finish fourth the following season, only to be kicked out in the first final.

Backing up a Premiership is one of the hardest achievements to accomplish in professional sport. You become the hunted as your opposition looks to bring their absolute peak performance each time they come up against you. So, all focus will be on the Swifts in 2022.

The key strength to the Swifts incredible season and, one of the main reasons they were able to claim their second Premiership in three years, was their array of options across the board.

When their defence was struggling they could mix it up with Lauren Moore. They had the most diverse and flexible midcourt in the league, in that each player could play multiple positions.

When things weren’t working they had the option of Nat Haythornthwaite and Sophie Garbin to come in and provide a spark off the bench.

However, the Swifts have lost all three of those players as they attempt to find a larger role at other clubs. They weren’t their three best players by a longshot, but losing depth like this can certainly catch up to you, especially towards the business end of the season.

If the Swifts experience injuries to key players, then they might lack the depth and versatility to cover those areas.

The Swifts did sign Allie Smith, who has had a couple of years experience playing in the SSN, as well as elevating former Training Partner’s Kelly Singleton and Teigan O'Shannassy.

This trio are very inexperienced but there is a lot of excitement within the Swifts’ camp for these players, so it could depend on how quickly they can develop throughout the season.

The Swifts are the reigning Premiers for a reason and, considering they were able to keep their main core, three Premierships in four years is certainly on the cards.

I can imagine this is what it is like when a teacher has to speak to the parents of the straight A student at parent-teacher evening.

What more can you say about the eventual Premiers of a season impacted by interrupted travel requirements and multiple state lockdowns.

The Swifts did everything necessary during the regular season to finish in the top two and guarantee a second chance in the finals.

The double chance was not needed, winning both of their finals appearances and storming home in quite a convincing Grand Final performance.